What Is M.A.T. Treatment

Few topics in the field of addiction recovery are more debated than M.A.T. — Medication Assisted Treatment.

As the opioid crisis has worsened, M.A.T. has become a more prominent part of a comprehensive drug and alcohol treatment regimen. Despite the Herculean efforts of treatment providers to push back against the country’s addiction epidemic, overdose numbers have continued to climb, to a high of 71,148 in 2019 — an almost 5% increase over the previous year.

That’s more overdose deaths due to drugs in a single year than the total number of U.S. servicemen and women killed during the entirety of the Vietnam War. When combined with alcohol-related deaths — estimated to be about 93,000 annually — the numbers are even more devastating. For those reasons alone, no one on either side of the M.A.T. debate disputes that there is a need for all available options that might have a chance of saving lives and reducing deaths.

Where opponents and detractors of M.A.T. differ, of course, is how big of a seat at the addiction treatment table it deserves.

Traditional proponents of abstinence-based treatment look at the shift toward incorporation of M.A.T. and are concerned that the pendulum has shifted too far in that direction — that M.A.T. has become less about medication assistance and more about medication maintenance, with individuals on two of the three federally approved M.A.T. drugs for years. That, they feel, is the substitution of one drug for another.

M.A.T. proponents, on the other hand, point to a number of short-term studies that demonstrate its efficacy; sometimes regard traditional, abstinence-based treatment as outdated; and tout the fact that M.A.T. can and does improve the quality of lives for those who enroll in an M.A.T. program.

Such arguments often drown out the idea that both philosophies can have a place in an effective treatment environment — such as the one offered at Cornerstone of Recovery.

Throughout our 30-year history, we’ve prided ourselves on two things: adhering to the abstinence of 12 Step-based recovery, as advocated by our founder; and incorporating evidence-based tools as they’ve been developed and proven effective at furthering our mission.

And that includes M.A.T. As a drug and alcohol treatment facility, we use two of the three government-approved drugs for M.A.T., and we do so in a way that’s safe, effective and in pursuit of our greater goal: Helping thousands of men and women over the years stop using drugs and drinking, lose the desire to do so, and find a new way to live — clean and sober from all mind- and mood-altering chemicals. 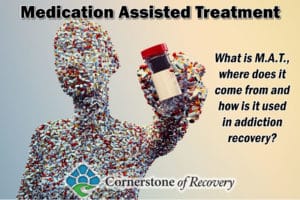 What is Medication Assisted Treatment? An overview of a complex recovery tool

What is Medication Assisted Treatment? Simply put, Medication Assisted Treatment — or M.A.T. — “combines behavioral therapy and medications to treat substance use disorders,” according to the Substance Abuse and Mental Health Services Administration [1]. In the drug and alcohol treatment field, M.A.T. has emerged as an alternative to abstinence-based treatment, to the point that… 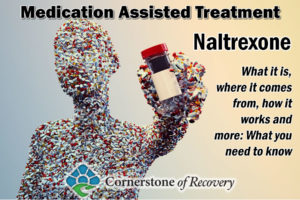 What Is Naltrexone? According to the pharmaceutical encyclopedia Drugs.com [1], naltrexone “blocks the effects of opioid medication, including pain relief or feelings of well-being that can lead to opioid abuse.” It’s often part of a Medication Assisted Treatment (M.A.T.) program for opioid (and to a lesser extent, alcohol) dependence and “is used to prevent relapse… 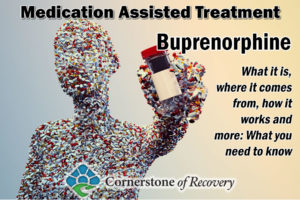 What Is Buprenorphine? According to the pharmaceutical encyclopedia Drugs.com [1], buprenorphine is “an opioid medication” that is “used to treat opioid addiction (either prescription or illegal drugs), as part of a complete treatment program that also includes counseling and behavioral therapy.” It is also “used to treat moderate to severe pain.” Brand names: Buprenorphine —… 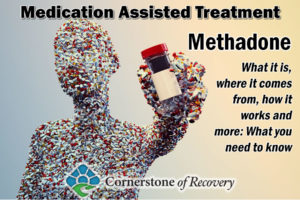 What Is Methadone? According to the pharmaceutical encyclopedia Drugs.com [1], methadone is “an opioid medication” that “reduces withdrawal symptoms in people addicted to heroin or other narcotic drugs without causing the ‘high’ associated with the drug addiction.” It is also “used as a pain reliever and as part of drug addiction detoxification and maintenance programs.”… 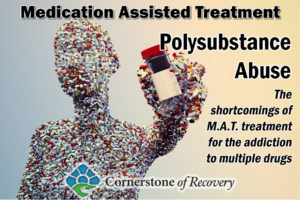 Medication Assisted Treatment: The complications and risks of polysubstance abuse

One of the concerns of Medication Assisted Treatment (M.A.T.) and polysubstance abuse is that while M.A.T. has some efficacy for those addicted to opioids, many individuals  are addicted to or use additional substances that are not addressed by  the medications utilized under the M.A.T. umbrella. Polysubstance dependence, according to the book Modern Medical Toxicology [1],… 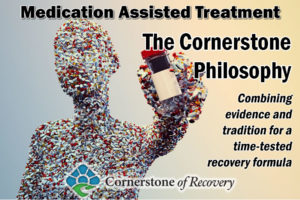 Cornerstone of Recovery and M.A.T.: What we do and why we do it

When it comes to Cornerstone of Recovery and M.A.T. (Medication Assisted Treatment), our clinicians, therapists, administrators and medical staff members are on the same page: There are no wrong doors when it comes to treating those who suffer from the disease of addiction, particularly those who are addicted to opioids. According to the Provisional Overdose…

Call And Speak With One Of Our Admissions Staff Members Today!