The irony of Cinco de Mayo?

In Mexico, home of the culture that’s co-opted for a Bacchanalian celebration every May 5, it’s not that big of a deal.

It is not, despite the popular misconception, a celebration of Mexican Independence Day. (That would be Sept. 16.) It’s actually the observance of an 1862 military victory over French invaders during the Battle of Puebla. The new nation, a half-century free of Spanish rule, had defaulted on debts to the European nations of Britain, Spain and France; the first two negotiated terms, but France landed troops at Veracruz in late 1861, determined to seize part of the country for itself.

According to The History Channel’s website, “Certain that success would come swiftly, 6,000 French troops under General Charles Latrille de Lorencez set out to attack Puebla de Los Angeles, a small town in east-central Mexico. From his new headquarters in the north, (Mexican President Benito) Juárez rounded up a ragtag force of 2,000 loyal men — many of them either indigenous Mexicans or of mixed ancestry — and sent them to Puebla.”

Although greatly outnumbered and poorly supplied, the Mexican forces, led by Texas native Gen. Ignacio Zaragoza, fortified Puebla and held off the French. By dusk on May 5, having lost 500 soldiers, France retreated. Less than 100 Mexican fighters had died. According to The History Channel, “Although not a major strategic win in the overall war against the French, Zaragoza’s success at the Battle of Puebla on May 5 represented a great symbolic victory for the Mexican government and bolstered the resistance movement. In 1867 — thanks in part to military support and political pressure from the United States, which was finally in a position to aid its besieged neighbor after the end of the Civil War — France finally withdrew.”

For years in Mexico, it's been a small observance confined mainly to Puebla; it’s not even a federal holiday in the country. In America, Latino activists began to celebrate it in the 1960s, seizing upon the symbolism of an indigenous people’s victory over European invaders. And in the 1980s U.S. beer distributors saw an opportunity to use it as a way of bolstering the sales of Mexican brews like Corona. Anheuser-Busch and Miller spent around $38 million dollars then targeting Hispanic markets, and according to Fox News, Corona spent $2 million in TV advertising in 2016 in the week leading up to Cinco de Mayo.

Today, it’s billed as a celebration of Mexican culture and heritage, but it’s also big business for the alcohol industry: In 2015, during the week of Cinco de Mayo, “Americans bought more than $735 million worth of beer and related malt beverages,” according to that Fox News report. According to Forbes, Americans spend roughly $2.9 billion annually on margaritas, and America is the biggest market in the world for tequila and mescal products.

Needless to say, staying sober on “Cinco de Drinko,” as it’s sometimes called, can be a challenge, especially if you want to partake of the culinary commemoration (fun fact: Americans eat roughly 81 million pounds of avocados on Cinco de Mayo, according to Forbes). Those whose sobriety is in its infancy may feel extremely uncomfortable dining at restaurants where booze is flowing so freely, and even those with some time clean and sober may find that sharing public spaces with inebriated individuals is a detriment to their serenity.

How, then, can those in recovery celebrate Cinco de Mayo? Glad you asked.

If you’re in the program, why not invite some of your closest friends over for a gathering? Have your own “Sober Cinco de Mayo” celebration, and feel free to use some of our suggestions, and of course, add your own. 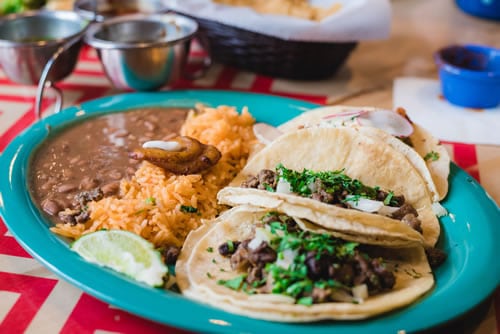 One of our favorite cookbook authors are Nancy Gerlach and Dave DeWitt, who penned a couple of fantastic books in the 1990s (“Just North of the Border” and “The Whole Chili Pepper Book”) from which no recipe has been a dud. Here are a couple of unique dishes that will dazzle your guests:

Place the orange marinade ingredients in a food processor and pulse until thoroughly combined and a rather coarse puree is formed. Layer the chicken breasts in a dish and spread the orange marinade over them. Marinate the chicken in the refrigerator for 12 to 24 hours. Clean the marinade from the chicken and season with salt. Get your grill or cast iron pan nice and hot, then reduce the heat to medium-high and cook the breasts until they’re browned on one side, 3 to 5 minutes. Rotate the chicken 45 degrees about halfway through cooking to create crisscross grill marks. Turn over the breasts and cook until they are browned on both sides and done throughout but still juicy, another 4 to 5 minutes. Slice the chicken breasts into strips and serve in flour tortillas with pickled red onions and other condiments of your choice.

Wash the rice until the water runs clear, then drain. Set aside. Place the jalapenos, tomatillos, garlic and cumin in a blender or food processor, add 1 cup of the broth and puree the mixture until it is smooth. Add additional broth to make 2 cups of pureed ingredients. In a skillet, heat the oil over medium-high heat; add the onion and sauté until it is soft, 2 or 3 minutes. Add the rice and sauté for a couple of minutes or until the rice starts to turn opaque. Remove from the heat. Bring the broth mixture to a boil in a saucepan and add sautéed rice. Reduce the heat, cover and simmer until all the liquid is absorbed, 20 to 30 minutes. Remove the pan from the heat. Lightly toss the rice with the chopped cilantro, garnish with sliced jalapenos and serve hot. 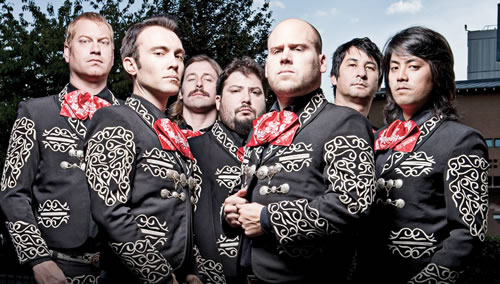 You can easily pick out mariachi music on Spotify or your streaming service of choice, but might we suggest something outside the box? Check out Mariachi El Bronx, the totally serious side project of the West Coast hardcore punk band known as The Bronx. It began as a lark, but it quickly became a serious endeavor, according to singer Matt Caughthran in a 2015 interview: “We weren’t setting out to change people’s perceptions about mariachi music; it was about playing music we loved because we grew up surrounded by Hispanic culture in L.A. It was something cool to do, and it was nothing more than our take on it. The cool thing about it is how people realized that two different worlds can mix and how similar they are through storytelling and working class elements … we focused on that and made sure we honored the rhythms and the history and that we took it as seriously as possible without turning it into a stress fest.”

There’s also the Spanish Harlem Orchestra, which plays “Afro-Cuban music that developed in a certain way here in New York and gained notoriety and became well-known in the '60s and '70s,” according to group co-founder Oscar Hernandez. “In the '80s and moreso in the '90s, it took a turn into salsa-pop and more commercial music, which mostly has been devoid of the essence of what this music is about, and we've brought it back. With us, you hear the raw essence of what this music is.”

And if you really want something old school, check out Buena Vista Social Club, a project by guitarist Ry Cooder that features Cuban musicians from the 1930s, ’40s and ’50s. It’s not Mexican, but it is Hispanic, and the rhythms and Spanish-language lyrics are both passionate and fun. 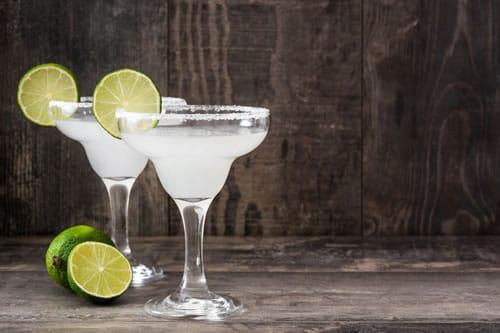 Sometimes, you want the taste of those cocktails of old without the liquor. While consuming “virgin” mixed drinks isn’t something everyone should consider — after all, the taste itself can be a trigger — they can certainly add some flair to the festivities.

On the blog The Pinning Mama, there’s a great recipe for virgin margaritas:

Pour Limeade, lemon Dasani sparkling water, lime Dasani Sparkling water and orange juice into a pitcher and mix. Rim glass with salt if desired by turning glass upside down and dipping it into water then salt. Fill glass 2/3 full with ice, then pour the margarita over the top. Garnish with lime. Note: This makes 1 10-ounce drink, scale the recipe up (1:1) to make your desired amount of drinks.

If margaritas aren’t your flavor, there’s a great list of virgin cocktails on the website Bustle that can be whipped up fairly quickly and inexpensively.

Of course, in recovery, any reason for a party is just another excuse to fellowship. If you really want to get into the spirit, you can always purchase a piñata, and if your homegroup is anything like the ones we’re familiar with, a couple of decks of cards and a few hands of spades are always excellent party favors.

The point is that Cinco de Mayo doesn’t have to mean you close yourself off from the rest of the world, nor does it mean that everyone else gets to have fun while you don’t. We certainly know how to have fun in recovery, and the best part about May 5? We get to go to work on May 6 without feeling like a bag of hammered crabapples.