Asking “what are the signs someone is addicted to alcohol” may seem like a ludicrous question on the surface.

However, while America is a culture awash in booze, not everyone who drinks has a problem. There are even a large number of heavy drinkers who never develop a problem, because the signs someone is addicted to alcohol isn’t necessarily evident by the amount they consume.

Consider: Last month, The Associated Press reported that after a two decade increase in alcohol consumption, Americans are drinking more now than they did when Prohibition was enacted as a reactionary measure against it in 1920 [1]: “In the late 1910s, just before Congress banned the sale and manufacture of alcoholic beverages, each American teen and adult was downing just under 2 gallons of alcohol a year on average. These days it’s about 2.3 gallons, according to federal calculations. That works out to nearly 500 drinks, or about nine per week.”

So does that meet the standards of alcohol use disorder, the scientific term for alcoholism? According to the Substance Abuse and Mental Health Services Administration (SAMSHA), it might [2]: “SAMHSA defines heavy alcohol use as binge drinking on five or more days in the past month.”

But what is binge drinking? What is heavy drinking? What constitutes alcohol use disorder? And most importantly, what are the signs someone is addicted to alcohol? Let’s dive in and unravel that booze-soaked ball of yarn. 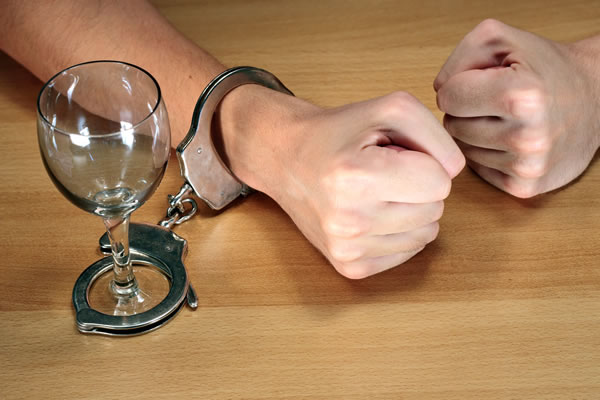 Entire libraries can be and have been written about alcohol’s role in the development of civilization. Perhaps no other substance, outside of food and water, has played a greater role in the rise and fall of empires, the advancement of art and medicine or the social norms of dozens of cultures than alcohol. Rather than rehash all of them, it’s important to provide some context for just how integral alcohol is in human history.

Writing for the School of Nursing at the University of Jordan, Dr. Ayman M. Hamdan-Mansour points out [3] that the Code of Hammurabi, which governed Babylonian law in ancient Mesopotamia and dates back to 1700 BC, governed wine use and sale. According to the Foundation for a Drug-Free World [4], “Fermented beverages existed in early Egyptian civilization, and there is evidence of an early alcoholic drink in China around 7000 B.C. In India, an alcoholic beverage called sura, distilled from rice, was in use between 3000 and 2000 B.C.”

Other historical alcohol highlights, according to the Foundation:

While America has a complicated history with alcohol consumption — it was frowned upon during its Puritanical beginnings, flowed freely during the 19th century and was the subject of two Constitutional amendments that first banned it and later repealed the ban in the 20th century — that information is likely well known by anyone with a cursory knowledge of U.S. history.

But how did humans first make the connection between alcohol as a substance and its intoxicating effects? According to a 2014 article on the website Live Science [5], “The ability to break down alcohol likely helped human ancestors make the most out of rotting, fermented fruit that fell onto the forest floor.”

That fermentation, aided by sunlight and naturally occurring yeasts, produces ethanol — the chemical in alcohol that’s most desirable and causes the most problems.

Signs Someone Is Addicted to Alcohol: It’s About the Ethanol 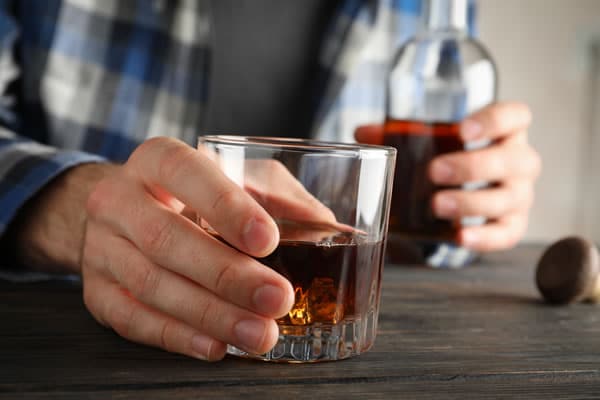 So how does ethanol affect the body, and when did mankind first acquire the ability to process it in the body? There are no definitive answers, but according to the Live Science piece, “To learn more about how human ancestors evolved the ability to break down alcohol, scientists focused on the genes that code for a group of digestive enzymes called the ADH4 family. ADH4 enzymes are found in the stomach, throat and tongue of primates, and are the first alcohol-metabolizing enzymes to encounter ethanol after it is imbibed.”

After examining the family trees of 28 species that represented an accumulated 70 million years of primate evolution, their findings: “Results suggested there was a single genetic mutation 10 million years ago that endowed human ancestors with an enhanced ability to break down ethanol.” And human ingenuity being what it is, Mark Keller writes in a 1979 paper for the Rutgers University’s Center for Alcohol Studies [6], “It is likely that they advanced rapidly from depending on accident to deliberate manufacture of this magical drink-food that relieved fatigue, assuaged pain, evoked gaiety, enhanced bravery, promoted friendship, and even facilitated communion with the invisible spirits that seemed to control mankind's fate.”

But how does alcohol interact in the brain? In breaking it down in laymen’s terms for the website How Stuff Works [7], Stephanie Watson points to three neurotransmitters affected when ethanol is carried to the brain via the bloodstream:

In other words, a foreign substance — in this case, ethanol — interferes with naturally occurring “feel good” chemicals in the brain, stimulating their production in a way that produces euphoria (along with the other physical and psychological side effects of drinking). Because the introduction of alcohol results in pleasure, it leads many individuals to repeat the experience, according to Dr. Fernando Valenzuela, in the paper “Alcohol and Neurotransmitter Interactions” [8]: “This effect may lead to positive reinforcement and persistent alcohol-seeking behavior. The brain’s adaptive changes to the continued presence of alcohol result in feelings of discomfort and craving when alcohol consumption is abruptly reduced or discontinued. These feelings reinforce alcohol-seeking behavior during abstinence.”

Because of the complexities of the brain, the science is exact, but Valenzuela points out that “reinforcement appears to be regulated by the interaction of multiple neurotransmitter and neuromodulatory systems,” among them systems that produce dopamine, endogenous (naturally occurring) opiates, GABA, serotonin and glutamate. Over time and with repetition, some of those systems become conditioned to release when alcohol is present and less so when it’s not. Eventually, alcohol interferes with the normal production of those neurotransmitters, and the brain becomes dependent on ethanol as the “gatekeeper” of when and how much those neurotransmitters are released.

In other words, the brain is “dependent” on alcohol to release chemicals that make us feel good, and the absence of alcohol has the opposite effect: We feel lousy. Ergo, brain and body tell us that repeating the pattern of alcohol consumption will make us “better.”

Signs Someone Is Addicted to Alcohol: Who Is ‘Someone?’ 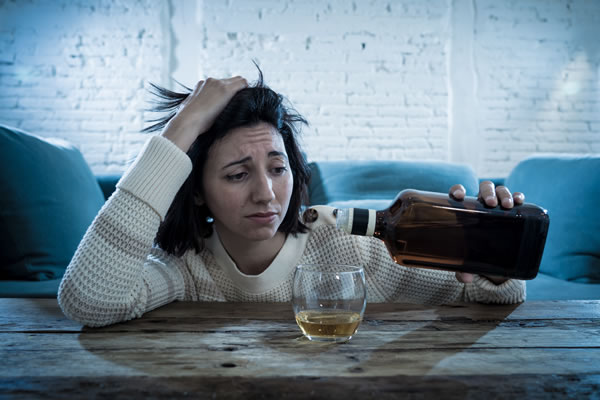 So if Americans consume that much alcohol, and alcohol does those things to your brain, why isn’t everyone who drinks showing signs someone is addicted to alcohol? Good question. Obviously, not everyone who drinks is an alcoholic. The simple answer is that some brains are biologically and genetically more predisposed to addiction than others. According to the National Institute on Drug Abuse [9], the spikes in those feel-good chemicals result in reinforcement to repeat the consumption of drugs and alcohol that produce those spikes, and “as a person continues to use drugs, the brain adapts by reducing the ability of cells in the reward circuit to respond to it. This reduces the high that the person feels compared to the high they felt when first taking the drug — an effect known as tolerance. They might take more of the drug to try and achieve the same high. These brain adaptations often lead to the person becoming less and less able to derive pleasure from other things they once enjoyed, like food, sex, or social activities.”

Why do some people become addicted and some don’t? A number of reasons, the NIDA continues:

So where’s the line? How much is considered an acceptable amount of alcohol to consume? Well, according to the National Institute on Alcohol Abuse and Alcoholism (NIAAA) [10], “The 2015-2020 Dietary Guidelines for Americans defines moderate drinking as up to 1 drink per day for women of legal drinking age and up to 2 drinks per day for men of legal drinking age.” But even those recommendations come with some cautions: Don’t drink if you take medications that alcohol might interfere with, don’t drink if you have a medical condition that can worsen because of alcohol, don’t drink if you’re planning to drive or operate machinery, don’t drink while pregnant.

Any consumption above moderate drinking may be considered problematic. What are those?

What Sort of Problems Can Develop? 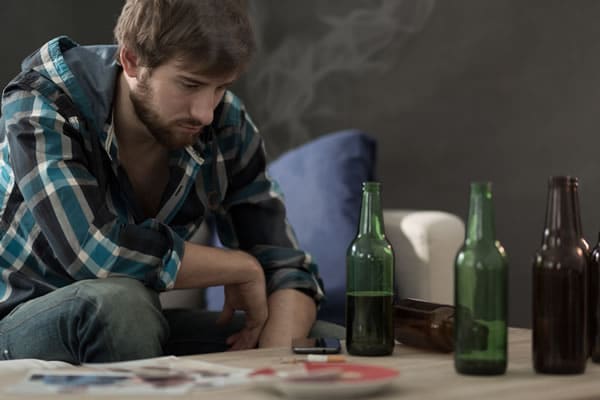 The negative consequences associated with alcohol consumption depend on a number of factors, as the NIAAA points out [11], including:

Not everyone is affected the same, but the generally accepted consequences of excessive alcohol include, according to the NIAAA:

And while those issues are all potential problems that heavy drinkers may experience, other studies show that even moderate drinkers may face some health risks: According to Harvard Health Publishing, an arm of Harvard Medical School [14]: A 30-year British study of more than 500 individuals found that “those who had the equivalent of four or more drinks a day had almost six times the risk of hippocampal shrinkage as did nondrinkers, while moderate drinkers had three times the risk.”

That doesn’t mean you should pour every alcoholic beverage in your house down the drain, but it should serve as a warning sign: Alcohol can be problematic, even for those who drink heavily but don’t consider themselves addicted to it.

So, What ARE the Signs Someone Is Addicted to Alcohol? 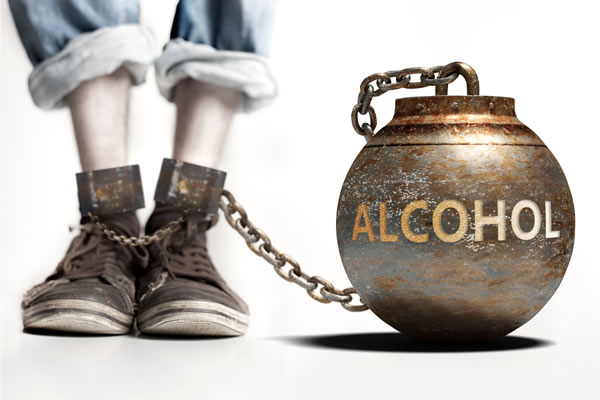 It can’t be stressed enough: Not everyone who drinks is addicted to alcohol, but everyone addicted to alcohol drinks. To separate the two, it’s important to keep an eye out for signs that someone you care about may be trudging down a path where their lives will be upended, if not destroyed, by booze.

But it’s important to know this: You don’t have to let it get to the point where they’re asking for help. If there are signs someone is addicted to alcohol, and you care about their health and well-being, approaching them in a non-confrontational, supportive and empathetic manner might keep them from additional harm.

While addicts and alcoholics may take part in shameful actions while under the influence, being an addict or an alcoholic is nothing to be ashamed of. They are, after all, legitimate medical diseases, recognized as such by both medicine and science, and it’s important to understand that when looking at the scope of the problem: They’re not “bad” people who need to be “good,” they’re sick people who need to get better. And that’s where alcoholism treatment can save lives.