Cornerstone of Recovery, East Tennessee’s premier drug and alcohol treatment center, is doing its part to provide COVID-19 vaccinations to a vulnerable population: its own patients.

Health experts have warned since the pandemic began last year that addicts and alcoholics are particularly vulnerable populations to the virus, and last fall, researchers writing for the peer-reviewed scholarly journal Diabetology and Metabolic Syndrome pointed out that “Marginalized communities, particularly those with substance use disorders (SUD), are particularly vulnerable to contract the infection and also likely to suffer from greater psychosocial burden.”

So when Travis Pyle, Cornerstone’s Director of Medical Services, saw an opportunity to acquire vaccines to provide COVID-19 vaccinations to patients seeking addiction and alcoholism treatment at the facility, he didn’t hesitate. In late 2020, the Cornerstone campus experienced a COVID-19 outbreak, but because of safety measures and health protocols enacted shortly after the pandemic began, it was contained quickly, infected patients were quarantined for the duration of their infection in a separate wing of the campus residence tower and drug and alcohol treatment continued for both populations throughout.

“I’m incredibly proud of the work we did to keep everyone safe and to prevent the spread of ongoing infection, but it wasn’t long after that that we started looking into how we could provide vaccinations to our patients,” Pyle said. “Because the Pfizer and Moderna vaccines require two shots, giving them wasn’t viable, since most patients are only with us for 30 days. When the Johnson & Johnson one-shot vaccine came out, we thought, ‘Let’s do this,’ because we wanted to increase the regional population of vaccinations, and more importantly, the population of vaccinated individuals at our center.” 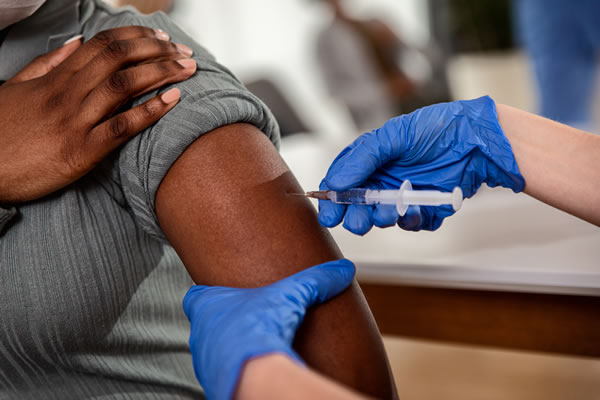 After the Centers for Disease Control lifted a temporary pause in the Johnson & Johnson vaccine distribution to study a rare clotting issue, those vaccines were again distributed regionally — which is where Ron Sherrill comes in.

Sherrill has served as a Knoxville-area pharmacist for more than four decades, and when Cornerstone founder Bill Hood established the fledgling drug and alcohol treatment center in Blount County’s Louisville community back in 1989, Sherrill and his partner at the time, Graham McNeil, were one of the company’s first financial backers.

“We didn’t have a whole lot of money at the time, so we didn’t count it as an investment as much as it was a way to help Cornerstone out, and it’s been great to see the growth of that,” Sherrill said.

A chance encounter at Bistro at the Bijou in downtown Knoxville between Pyle and Sherrill led to a productive partnership, and an opportunity fort Sherrill to again step in to assist Cornerstone. For years, Sherrill and his family owned CareMax Community Pharmacy before selling the company to Paragon Infusion, a Texas-based company. Today, he’s the owner of Phoenix Pharmacy on Gay Street in downtown Knoxville.

“We’ve done primarily the Moderna vaccine to a lot of nursing homes and that sort of thing — clinics and drive-thrus, and our employees have just been fantastic,” Sherrill said. “When Travis and I talked, and with the Johnson & Johnson vaccine opening back up, we determined that would be a better choice for a patient population that turns over pretty regularly.”

Volunteers line up for inoculation

On Wednesday, May 12, Phoenix Pharmacy provided 50 Johnson & Johnson COVID-19 vaccinations to the Cornerstone campus, where they were given to patients who sign up voluntarily from both Cornerstone and its sister facility, Stepping Stone to Recovery. There was no cost to the patients or to Cornerstone, Pyle pointed out, and because the clinic was successful, additional COVID-19 vaccinations may be offered as Cornerstone’s patient population changes on a monthly basis.

“Ron and his people are just doing it as a community service, and that’s just typical of what he does,” Pyle said. “He does a lot behind the scenes, and he doesn’t take credit for it or money for it.”

For his part, Sherrill is quick to demure any credit.

“We’re not doing anything that heroic,” he said. “The more people we get vaccinated, the quicker we can get this behind us and get back to something resembling semi-normal.”

ShareTweetWhatsappPinterestLinkedin
RedditStumbleuponDeliciousXingTumblr
Posted in About Us, Cornerstone of Recovery, Drug Addiction Treatment 101