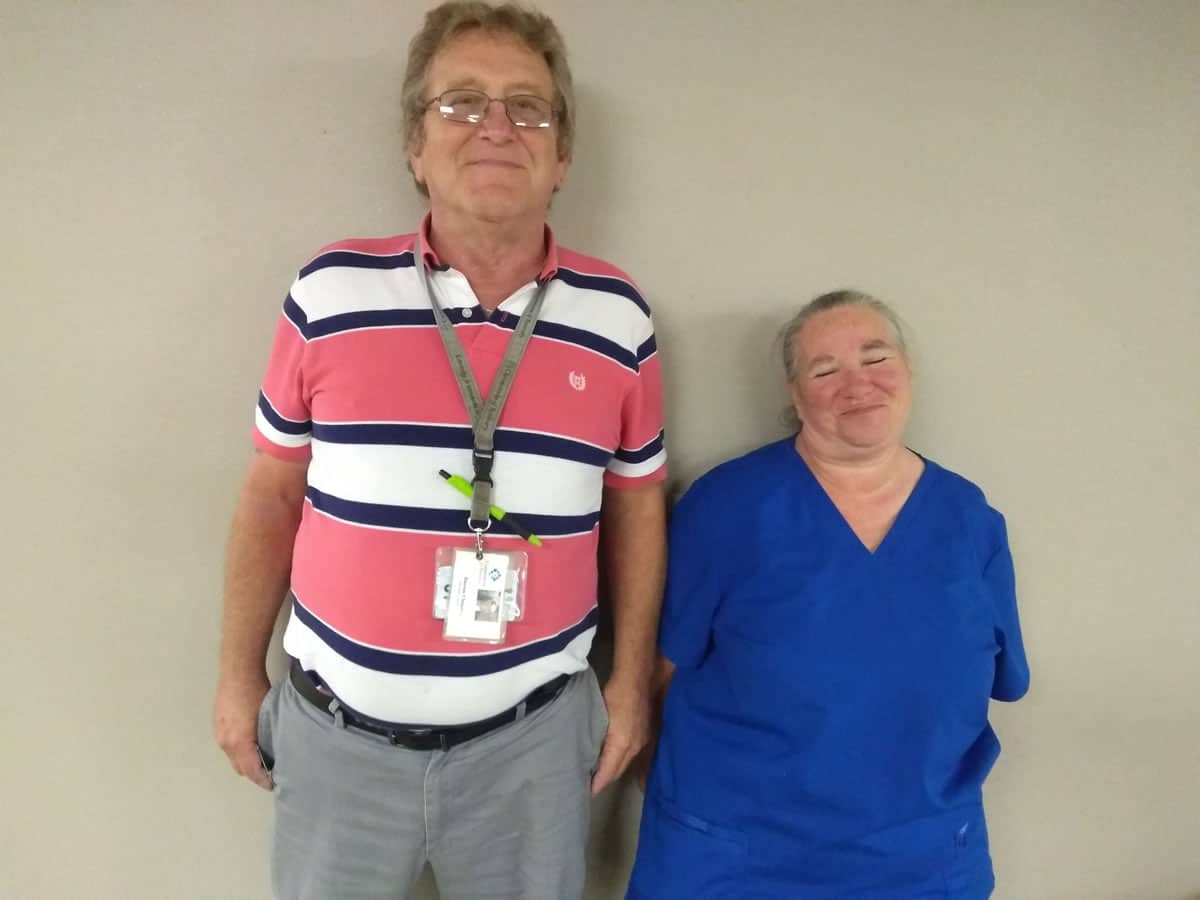 Riding the roads around the Tri-Cities, when they were young and in love, Bonnie and Darren (“Chappy”) Chapman used to drive by the Bristol Motor Speedway, home of one of the most popular races on the NASCAR circuit since 1961.

Every time, Chappy would point. Bonnie would roll her eyes, because she knew what was coming: Chappy’s best country boy impersonation, vowels drawn out for miles. He refers to it as his “Bubba Redneck” voice, and he’d tell Bonnie: “If I ever get you in there, baby, I’m gonna ask you to marry me!”

He was a changed man when the two first met, back in 2011 at Coldstar International, located in the Piney Flats community of Northeast Tennessee. Bonnie worked there in quality control; Chappy was hired to maintain machinery. She caught his eye; she liked to watch him walk away when he chased her down and got her to sign off on his timecard.

Bonnie had moved from New Jersey to Florida to Upper East Tennessee, and Chappy carried himself with the demeanor a man who had served his country. He joined in 1979, at 18 years old, and after a decade, left the Navy as an E6, or petty officer first class. After working for a short time in Detroit, he moved to Nashville and joined the Tennessee Army National Guard, where he served for another 13 years.

He also struggled with a drinking problem, which first brought him to Cornerstone of Recovery in 2002 as a patient. A year later, he was hired as a counselor in the Intensive Outpatient Program, but in 2004, he was activated with the 278th Armored Cavalry Regiment and sent to Iraq. Back home, he returned to Cornerstone briefly, bought some property near his parents’ home north of Nashville and “didn’t do what I was supposed to do,” he said.

“I was in and out of meetings, and then I went to Iraq the second time in 2010, and when I came back, I really went down the rabbit hole,” he says. “My dad took me to the VA hospital in Nashville, and they told my parents to call the funeral director, because they didn’t think I was going to survive detox. When I did, the doctor came out and said, ‘God’s not done with you yet!’”

The staff got him a bed at the VA rehabilitation center in Johnson City; to ensure he stayed sober, they quarantined him to a lockdown psychiatric ward at the Alvin C. York campus of the VA system in Murfreesboro, Tennessee.

“The doctor told me, ‘If you walk out this door, you’ll never make it back,’” he adds. 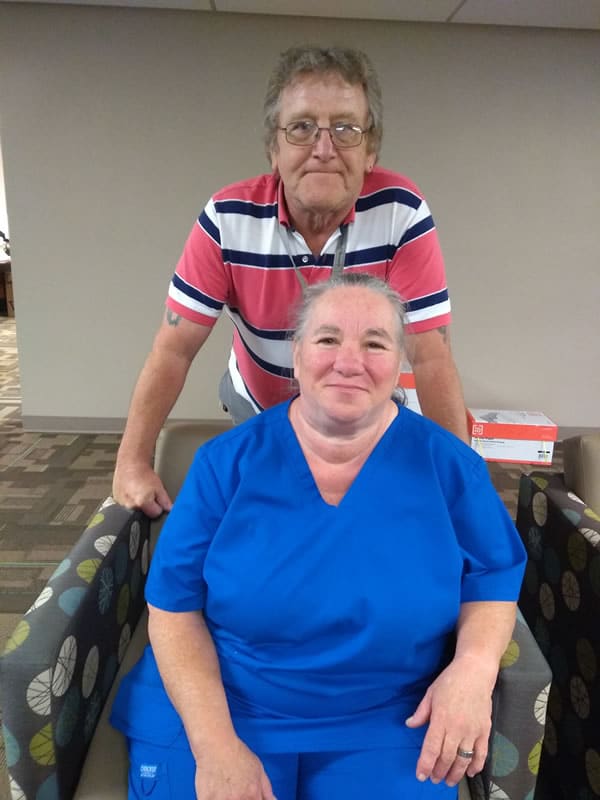 That was in December 2010. He and Bonnie started dating shortly thereafter, eventually falling in love and moving in together. An industrial accident almost cost him his thumb, and while he recuperated, he reached back out to Cornerstone about the possibility of a job. Extended Care Director Julie Hamlin called and asked him to interview for another IOP counseling position. When he arrived, she told him that Dan Caldwell, the CEO of Cornerstone at the time, wanted to speak with him.

“Dan told me, ‘Chappy, you have a history of relapse, and I’m not really comfortable rehiring you, but Julie’s going out on a limb, so we’re going to go ahead and offer you the job,’” Chappy says. “I stood up and walked to the door, and then I turned around and said, ‘Dan, I’m going to take that as a challenge, and a few years from now, I’m gonna show up with a bottle of hot sauce, because I’m gonna make you eat your words!’”

Once again, Chappy joined the Cornerstone family. Back home one weekend, Bonnie surprised him with tickets to the Saturday race at Bristol. It was a date, and once they got through the gate, he remembered his promise. He dropped to one knee, laughing, but Bonnie told him to quit acting silly. After they were seated, however, someone tapped Chappy on the shoulder.

“It was the preacher from our church, and all of the congregation, and he said, ‘She’s got something to ask you,’” Chappy remembers. “She flipped it on me and asked me to marry her right in the middle of the Bristol raceway, and I couldn’t say no!”

Bonnie smiles as Chappy tells the story, quiet while her boisterous other half punctuates the tale with his hands, as he’s prone to do. She turns red and grins as he recounts the best part of the evening: Their preacher gave them tickets to the Sunday race as well.

Eventually, Bonnie moved to East Tennessee to join Chappy, who introduced her to Gail Lawrence, Cornerstone’s housekeeping manager. Gail hired Bonnie, and on July 20, 2013, the two were married. Bonnie isn’t as loquacious as her husband, but he says enough for them both.

“Bonnie’s a very caring person who knows how to deal with people and comfort them,” he says. “She puts her own feelings aside for the time to help others get through their hurt and pain.”

“I just always tell people I love them, because love comes in different forms,” she says.

Co-workers became family, and on Thursday, as the pair were feted by their “family” members to mark the occasion of their retirement, it was obvious to all in attendance that the affection is mutual.

“There’s too much going on in the world that we don’t need to be at each other and think bad thoughts,” Bonnie says. “You need to be with your family, and you need to take care of one another.”

“Family’s all you’ve got,” Chappy adds.

And that was the tipping point in deciding to retire. For a while now, he’s been driving over to Middle Tennessee to help his parents out. When he was a full-time Methodist minister, driving over on Fridays, working all day on Saturdays and being back by Sunday in time for church was exhausting. Even after stepping down from the pulpit, he’s found himself working more and more to keep his parents’ place up, and their health has forced the Chapmans to move closer in order to more effectively care for them.

It is, Chappy adds, a serendipitous turn of events.

“On Dec. 22, my dad dropped me off at the VA hospital and said, ‘Get this shit or die, because coming home ain’t an option,’” he said. “But you know what? I’m going home — only this time, I was invited.”

It’s a bittersweet parting — he’s spent his last few years as a recovery coach and as leader of morning spirituals and the Cornerstone veterans groups, and seeing the lightbulb go off by patients who make the spiritual connections he once did, or hearing how a former patient is succeeding thanks to a recovery foundation laid at Cornerstone, is rewarding beyond measure. For Bonnie, her abilities to bring about serenity through cleanliness, to give staff members and patients one less thing to stress about by maintaining order, is a blessing.

And the people? Their family members? It’s not goodbye, by any means. They’ll be back around for a visit, and their door in Middle Tennessee will always be open.

“There’s people around here that will have your back,” Chappy says. “There’s people here I could call up in the middle of the night, and they’d be there.”