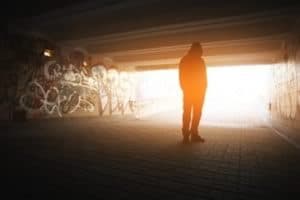 Ask my high school classmates, and I'm probably the last person they'd figure would turn out to be a heroin addict. I graduated fifth in my class, went to college on several scholarships and was a member of several extracurricular clubs. I come from a good family, and the one and only time I was sent to the principal's office, in the sixth grade, was enough to scare me so badly I never went back.

In the long run, none of that mattered. All of those things didn't address what was wrong on the inside: this gnawing black hole that seemed to eat away any sort of self-esteem or self-love that I had. I never felt good enough or worthy enough or popular enough or whatever. I could be in a room full of crowded people and still feel absolutely, terribly alone. For years, I was uncomfortable in my own skin.

Drugs -- and I use that term to refer to any mind- or mood-altering substance, including alcohol -- changed all of that. I think I became addicted from the first time I took a drink. For the first time, I felt different -- more confident and more popular, for sure, but that black hole in the center of my chest didn't seem as big or as painful. It quieted the demons I struggled with and made it easier to feel accepted, both in my own mind and by others.

So I went through life from that point donning a chemical suit of armor to function. I continued to get good grades, graduating magna cum laude from college, leading the school newspaper to several awards and serving as an officer in a number of organizations. I went on to land good jobs, go out with decent girls and make some great friends. And at the end of the day, when it was just me, and the sun had set on the world and in my troubled mind, I kept the darkness at bay with a bottle. Of liquor, of pills. Later, with a bag and a spoon and a needle. Until my life deteriorated, over time, into a smoldering wreck.

That chemical suit of armor turned on me, and suddenly I found myself unable to control it. It controlled me, and that black hole suddenly collapsed in on itself, and I felt myself falling. I was drowning, and I was helpless to do anything to stop it. I was using against my own will, destroying my health, my relationships, my career.

That suicide mission came to an end when I found recovery. I learned that I suffered from a disease known as addiction, a cunning, baffling, powerful, destructive force that had a singular mission: to kill me. Slowly and painfully. It wasn't a moral deficiency or a weakness of will, despite the stigma put upon it by society. I was sick. And the 12-step program I found taught me a way to get better.

Drugs, you see, were just a symptom of my problem. What was wrong on the inside, the rotted-out places eaten up by the worms of fear and self-loathing, had to be fixed. But I had to get clean first in order to do that.

Through recovery and the God of my understanding, I've been able to do that. I'm blessed that the staff here at Cornerstone of Recovery has asked me to use this blog as a forum, to talk about my own addiction and recovery in hopes that others who battle similar demons may read something that reaches them. I'm not a counselor, or a psychiatrist, or a priest. I'm not a certified expert in the field of alcohol or drug addiction, and I don't have all of the answers.

Most of what I'll write about will simply tell my own story, and repeat some of the advice I've taken and words of wisdom I've heard from other addicts and alcohol and drug counselors here at Cornerstone. My predecessors in recovery led me to the place I am today, but no amount of desire on their part could manifest the willingness on mine. I had to make a decision to take that first step into the light. They were there to hold my hand and help me along the way, but the initial steps had to be mine and mine alone.

Just for today, I'm free of that scourge that used to consume my every waking thought and action. And just for today, I can look myself in the mirror and see a man. Not a perfect man, but a good man, long kept in bondage, who walks without the armor that eventually turned to chains. A man who hopes his experience, strength and hope can give back to others what was so freely given to him, because I can only keep what I have by giving it away.