Patients who make the best candidates for Dialectical Behavior Therapy (DBT) are often trapped in the yin-yang pull of binary thinking.

Their brains slingshot back and forth between two areas of thought: The idea that stressful emotions surrounding negative events is a way of life that must be accepted, and the overwhelming desire to change those emotions to escape the turmoil they cause.

Their minds tell them, “This is the way it’s always been, and this is how you will always feel.” On the flip side of that coin, these individuals and their loved ones push them to make necessary changes to alter those thoughts and feelings, and they find themselves trapped: Which path, they wonder, do they choose?

Dialectical Behavior Therapy (DBT) teaches them to recognize there is an alternate way forward, out of psychological pain and into the light of healing: a middle path, if you will, that has roots in both Eastern philosophy and contemporary psychotherapy. As a result, recipients of this particular form of treatment can find respite from a disorder that has robbed them of so much, as well as a way out of the emotional turmoil that often contributes to it. 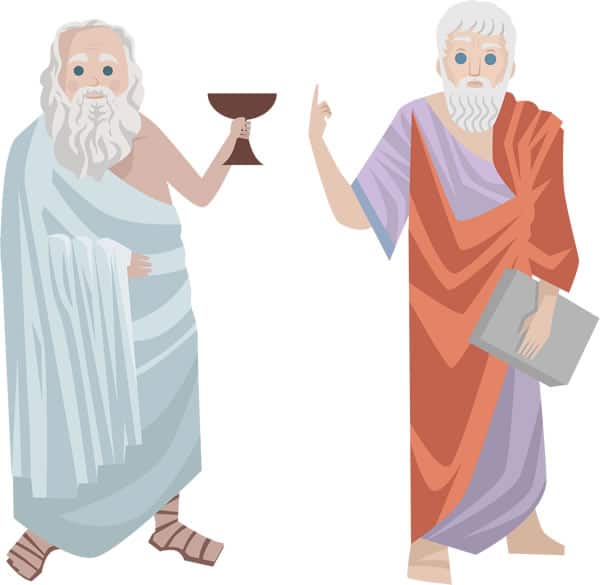 The Stanford Encyclopedia of Philosophy notes [1] that “’dialectics’ is a term used to describe a method of philosophical argument that involves some sort of contradictory process between opposing sides,” and its roots can be traced to the ancient Greeks. The writings of Plato, it’s noted, would often present “his philosophical argument as a back-and-forth dialogue or debate, generally between the character of Socrates, on one side, and some person or group of people to whom Socrates was talking (his interlocutors), on the other.”

The interlocutors, for example, would define “philosophical concepts or express views” that Socrates would challenge or oppose, but as discussion continued, both sides would begin to find common ground: “As the dialogues go along, Socrates’ interlocutors change or refine their views in response to Socrates’ challenges and come to adopt more sophisticated views. The back-and-forth dialectic between Socrates and his interlocutors thus becomes Plato’s way of arguing against the earlier, less sophisticated views or positions and for the more sophisticated ones later.”

The dialectical method was brought into contemporary focus by the German philosopher Georg Wilhelm Friedrich Hegel, who wrote extensive about “human freedom, or agency, and specifically the unique ability of human consciousness to be aware of itself and reflect on its future,” according to Phillip Dybicz and Loretta Pyles, writing for California State Polytechnic University in Pomona [2]. However, as Simon Blackburn points out in his book “The Oxford Dictionary of Philosophy,” “Hegel's own attitude to logic is complicated by the equation between history on the one hand and thought or spirit on the other, meaning that disharmony or 'contradiction' in the world is an instance of contradiction in thought.” [3]

DBT was conceived as a psychotherapy in the 1980s, thanks to the work of Marsha Lineman, a psychological researcher at the University of Washington. According to the university’s website [4], “Dialectical behavior therapy (DBT) is a cognitive behavioral treatment that was originally developed to treat chronically suicidal individuals diagnosed with borderline personality disorder (BPD) and it is now recognized as the gold standard psychological treatment for this population. In addition, research has shown that it is effective in treating a wide range of other disorders such as substance dependence, depression, post-traumatic stress disorder (PTSD), and eating disorders. As such, DBT is a transdiagnostic, modular treatment.”

The Development of DBT 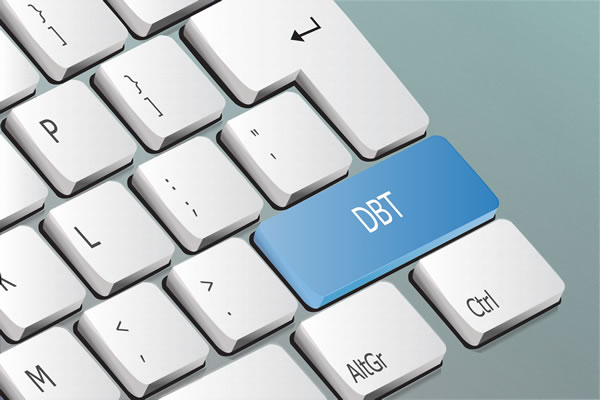 According to Dr. Alexander Chapman, writing for the peer-reviewed journal Psychiatry MMC [5], “Dialectical behavior therapy (DBT)1 evolved from Marsha Linehan's efforts to create a treatment for multiproblematic, suicidal women. Linehan combed through the literature on efficacious psychosocial treatments for other disorders, such as anxiety disorders, depression, and other emotion-related difficulties, and assembled a package of evidence-based, cognitive-behavioral interventions that directly targeted suicidal behavior. Initially, these interventions were so focused on changing cognitions and behaviors that many patients felt criticized, misunderstood, and invalidated, and consequently dropped out of treatment altogether.”

In other words, traditional methods of psychotherapy, such as Cognitive Behavioral Therapy (CBT), often placed patients and treatment providers on opposing sides of a particular issue. Because many of those initial clients presented with borderline personality disorder, Lineman sought to find middle ground — which, in turn, led her to the Middle Path.

First, a bit about borderline personality disorder: According to the Mayo Clinic [6], it’s “a mental health disorder that impacts the way you think and feel about yourself and others, causing problems functioning in everyday life. It includes self-image issues, difficulty managing emotions and behavior, and a pattern of unstable relationships.”

Randy Wolbert, a Zen teacher and trainer for Behavioral Tech — a Linehan Institute Training Company — recalls how “Linehan realized that she needed to include elements of acceptance to her treatment in order to both decrease the extreme suffering of her clients and to facilitate the changes necessary for them to build a life worth living.” To do that, Wolbert recalls on a Behavior Tech blog post [7], she began to seek out a way of acceptance that could be incorporated into DBT, which led her to some tenets of Buddhism.

In Buddhism, the Middle Path — or Middle Way, as it’s often called — “describes the way or path that transcends and reconciles the duality that characterizes most thinking,” according to the Buddhist organization Soka Gakkai International [8]. “In the broadest sense, the Middle Way refers to the Buddha’s enlightened view of life and also the actions or attitudes that will create happiness for oneself and others; it is found in the ongoing, dynamic effort to apply Buddhist wisdom to the questions and challenges of life and society. In this sense, the search for the Middle Way can be considered a universal pursuit of all Buddhist traditions — the quest for a way of life that would give the greatest value to human existence and help relieve the world of suffering.”

In other words, it’s the path between two extremes, which made it an ideal philosophy to bring into the DBT framework.

The Nuts and Bolts of Dialectical Behavior Therapy (DBT) 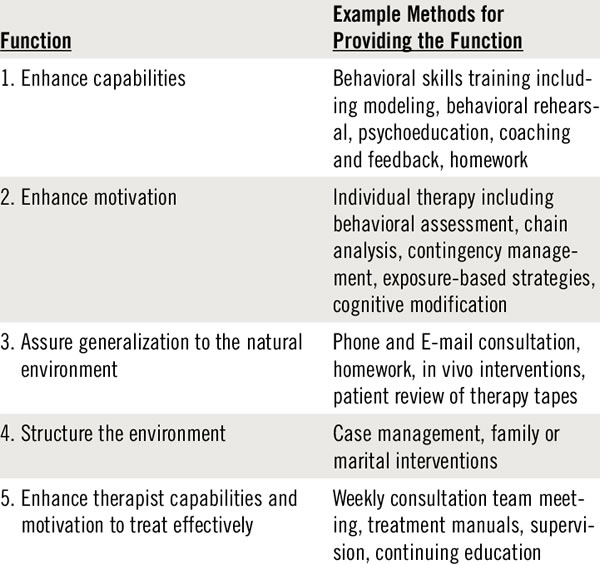 Dialectical Behavior Therapy (DBT), according to the Linehan Institute [9], is “is a cognitive behavioral treatment that was originally developed to treat chronically suicidal individuals diagnosed with borderline personality disorder (BPD) and it is now recognized as the gold standard psychological treatment for this population. In addition, research has shown that it is effective in treating a wide range of other disorders such as substance dependence, depression, post-traumatic stress disorder (PTSD), and eating disorders.”

There are, according to Linehan and Dr. Kelly Koerner [10], the five key functions of DBT:

So what do those functions involve? Within each is a specific set of goals: For example, enhancing a patient’s capabilities would involve helping patients to (a) regulate emotions, (b) pay attention to the present moment through attention regulation, (c) “effectively navigating interpersonal situations” and (d) “tolerating distress and surviving crises without making situations worse.” [5]

Each step in the DBT process is aimed at finding the medium between two extremes: the enhancement of a patient’s capabilities are well and good, but it’s necessary to help patients realize the practical applications of those enhancements — hence the goal of ensuring “that new capabilities generalize to the natural environment.” In other words, if a patient can’t apply them to their day-to-day lives, then is the therapy truly beneficial?

Another way that Dialectical Behavior Therapy (DBT) is unique is that it focuses on improving the quality of care as well as the care being delivered. As Chapman notes [5], while treating patients who present with problems that require more intensive care “can be stimulating and rewarding, these patients also engage in a potent mix of behaviors that can tax the coping resources, competencies, and resolve of their treatment providers.” By constructing a therapy team, the therapists can avail themselves of the collective resources of their colleagues, and in turn “maintain a compassionate, nonjudgmental orientation toward their patients.”

According to Linehan and Dr. Linda A. Dimeff, “the spirit of a dialectical point of view is never to accept a proposition as a final truth or indisputable fact. In the context of therapeutic dialogue, dialectic refers to bringing about change by persuasion and to making strategic use of oppositions that emerge within therapy and the therapeutic relationship.” [11] 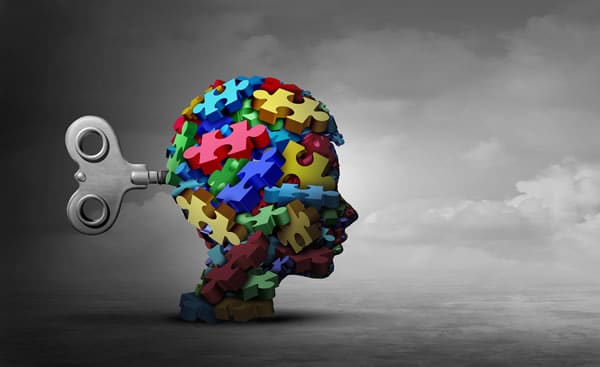 In a 2008 article for Addiction Science and Clinical Practice [11], Linehan and Dimeff expound on Dialectical Behavior Therapy as it relates to the treatment of substance abuse. Because DBT “classifies behavioral targets hierarchically,” the first of which is “to decrease behaviors that are imminently life-threatening (e.g., suicidal or homicidal),” addiction “is the highest order DBT target within the category of behaviors that interfere with quality of life.”

While the goal of DBT, within the confines of addiction treatment, is abstinence, the “middle path” method helps establish abstinence as a goal that’s attainable while allowing that slips and stumbles do not constitute failure: “The dialectical approach therefore joins unrelenting insistence on total abstinence with nonjudgmental, problem-solving responses to relapse that include techniques to reduce the dangers of overdose, infection, and other adverse consequences,” according to Linehan and Dimeff.

In that sense, DBT often begins by setting small goals that mirror the philosophy of 12 Step recovery programs: “Because a lifetime of abstinence may seem out of reach, the therapist encourages the patient to commit to a length of abstinence that the patient feels certain is attainable — a day, a month, or just 5 minutes,” the pair write. “At the end of this period, the patient renews the commitment, again for a sure interval. Ultimately, he or she achieves long-term, stable abstinence by piecing together successive delimited drug-free periods. The Twelve Steps slogan, ‘Just for Today,’ invokes the same cognitive strategy to reach the same goal — a lifetime of abstinence achieved moment by moment.”

Writing for the addiction and recovery website The Fix [12], Regina Walker adds that “Clients are then taught strategies for dealing with potential problems including ‘triggers’ to use drugs and/or alcohol. This ‘coping ahead’ skill is the DBT equivalent of relapse prevention. It acknowledges that an addict’s fallback coping mechanism in many situations is to use and it is essential that the individual identify other tools for addressing difficult situations ahead of time.”

When effectively applied to addiction treatment, according to Behavioral Tech [13], DBT “works by helping clients learn effective strategies for regulating emotions and coping with urges and cravings without using substances.” 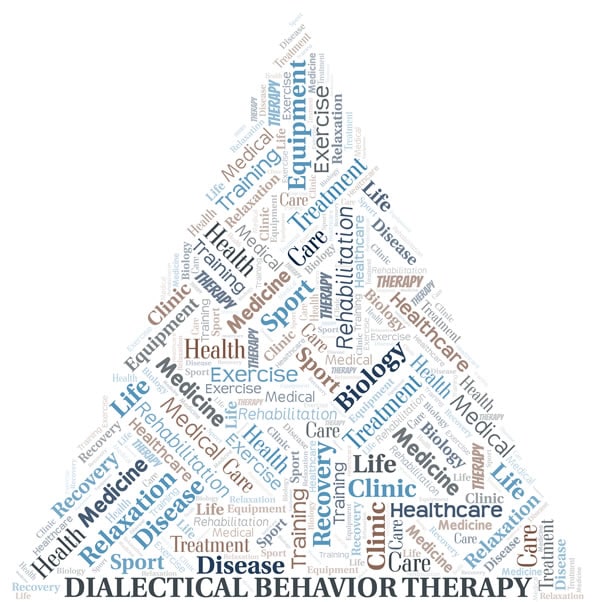 According to the Linehan Institute [14], “There is a wealth of evidence supporting the effectiveness of DBT. The first randomized controlled trial (RCT) of DBT was published in 1991, in which Dr. Marsha Linehan and her colleagues found that DBT resulted in significant improvements for chronically suicidal and self-injuring women with borderline personality disorder, a clinical population that had previously been viewed as untreatable. In the decades since this landmark study, DBT has been extensively researched for individuals with a wide range of mental health conditions receiving treatment in diverse practice settings around the world.”

When it comes to the efficacy of DBT application in the framework of addiction treatment, various studies have continued to show similar results:

While there is no “silver bullet” when it comes to psychotherapeutic tools to treat addiction, DBT is clearly another effective means by which those who struggle with chemical dependency can meet the universal goals of treatment: stop using, lose the desire to do so and find a new way to live.