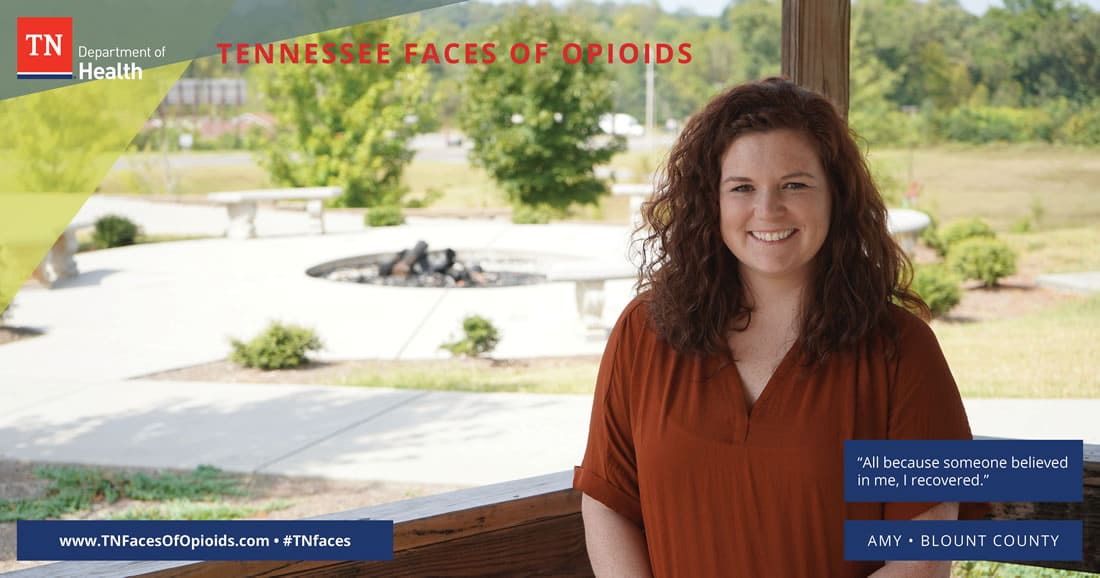 Her mother’s near-fatal motorcycle wreck wasn’t enough to stop it.

An emergency room doctor cutting into abscesses caused by IV drug use wasn’t, either.

In the end, it was love that brought Amy Sawyer out of the depths of addiction, and she found it as a patient at Cornerstone of Recovery. Today, she’s approaching four years clean, works as an Extended Care counselor in Cornerstone’s Intensive Outpatient Program and is sharing her story statewide as one of the “Face of Opioids,” a campaign by the Tennessee Department of Health to spotlight the state’s opioid epidemic by putting the names and faces of everyday Tennesseans on billboards and social media campaigns.

The idea, according to Elizabeth Hart, the associate director of the Office of Communication and Media Relations for the Tennessee Department of Health, is to help those unaffected by addiction see those who suffer as flesh-and-blood individuals rather than numbers on a sheet of statistics. The website, www.tnfacesofopioids.com, was started in July, and it includes testimonies from individuals like Sawyer who are in recovery, along with family members of deceased addicts, law enforcement and first responders, members of the clergy and more.

“It’s open to anyone from all walks of life, no matter their background, because the idea is really to reduce the stigma of opioids and show that there real people in this state who have been impacted by the crisis,” Hart said. “There are real people behind those numbers.” 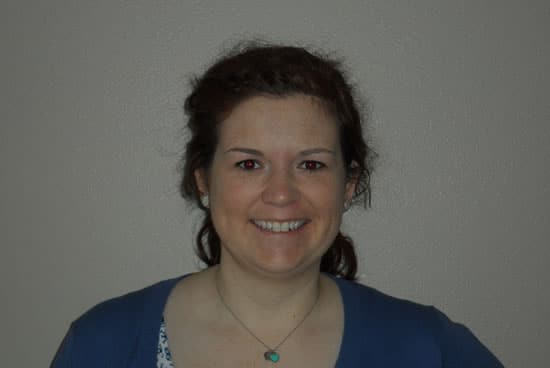 Sawyer’s story is as real as it gets. As the “Faces” representative for Blount County — to the south of Knoxville and home to Cornerstone for 30 years — she graduated from William Blount High School in 2002, but her childhood was a tumultuous one, she said. From the ages of 4 to 9, she was molested by a cousin, who only stopped because the cousin started molesting her sister. On top of that, she struggled to find her place in a strictly religious household.

“I always had this sense that I wasn’t important, and that I had to exaggerate a lot of things,” she said. ”I was bullied because I had red hair and freckles, but in the 10th grade, I met a girl who was super popular, and I wanted to be like her. She asked me if I smoked pot, and when I said no, she invited me to her house that night. We did pills, we smoked, we drank … and I woke up in her bed, with her boyfriend raping me. At that point, I started feeling like it was easier to give it away than to have somebody ask for permission and then have it taken from me if I said no.”

Her parents refused to give her permission to leave home until she was married, so at 21, she married her boyfriend. At the time, they merely smoked weed, and Sawyer became a phlebotomist. When her husband brought home a friend who introduced them to hallucinogens and pills, she became their hook-up for clean needles.

“I ended up going down that road of being strung out on IV drugs, I got divorced, and I ended up living in my car, because my parents wouldn’t let me move back in with them because I had gotten married and moved out,” she said. “I remember I had a horrible, knockdown, drag-out conversation with my mom, where she said, ‘I don’t love you,’ and I said, ‘I hope you die.’ The next day, I called into work and actually told them my mom had died so I could stay home and use, but then 30 minutes later, my sister called and said mom and dad had been in an accident on the Blue Ridge Parkway.”

The path leads to Cornerstone 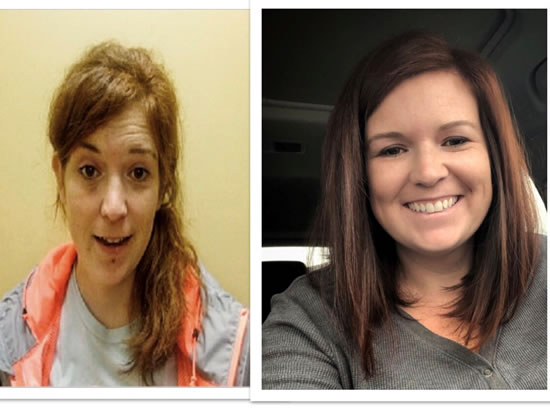 Amy Sawyer: Her Cornerstone intake photo in 2015 (left), and today.

Her mother was airlifted to a neuro-trauma intensive care unit in Asheville and spent 78 days in a coma. Doctors didn’t know if she would walk, talk or even remember her family, but through therapy at Knoxville’s Patricia Neal Rehabilitation Center, she slowly regained all she had lost. Her father, however, let Sawyer know that her presence wasn’t welcomed. To cope, she began a serious relationship with a new man who drank but didn’t do drugs.

She hid her addiction from him for a couple of years, she said, but when he found out, she was worse off that even he suspected. He helped her detox and kept a close eye on her, but on the anniversary of her mother’s accident, she started using again. He convinced her to go to therapy, but she bounced between being prescribed Xanax at a psychiatrist’s office in the same complex and working with a therapist who insisted that her journey was perfectly normal. She was in the psychiatrist’s office, in face, when a panic attack led to a trip to the local hospital, where doctors discovered the abscesses she had attempted to hide.

“I just remember as he was cutting them open, he said to me, ‘Are you done using now?’ And he was just so cold about it,” she said. “By that point, we had gotten married, and my husband told me, ‘I’m not going to give you an ultimatum, but I can’t watch you kill yourself, because I love you too much. So he took the dog and the new mattress and left, and I went on a bender for a couple of days.”

She eventually called him, agreeing to get help; a co-worker active in an area recovery program suggested Cornerstone, and after a tour of the facility, she packed her things, “got very drunk” and showed up in the Cornerstone parking lot five hours before she was scheduled to be admitted.

“I finally went in, and I never looked back,” she said. “I remember the counselors telling me, ‘You don’t have to live this way anymore. You can find a new way to live.’ It was wonderful to have somebody not be judgmental. Everybody, from the receptionist to the counselors to people in the cafeteria, were just so understanding. They didn’t judge me, and they just loved on me.”

From patient to employee

That was in December 2015, and Sawyer has been clean ever since. Her story makes her a perfect candidate for “Faces of Opioids,” which provides a condensed version for posters and social media graphics that represent all 95 of Tennessee’s counties. It’s an effort made possible by a grant from the Centers for Disease Control and Prevention, and the latest overdose statistics — 1,269 deaths in Tennessee in 2017 alone, part of roughly 72,000 nationwide — demonstrate that there’s a dire need for direct and personal conversations with individuals like Sawyer.

After all, her story has a happy ending, and her continued growth as a recovering woman and a responsible, productive member of society is inspiring — to her coworkers, her patients and all those affected by the “Faces of Opioids” campaign.

She’s still married and credits Cornerstone’s Family Fundamentals program, a weekend of workshops for patients and their immediate families, with saving that relationship. In addition, when she left treatment, she made it a personal goal to return to Cornerstone as an employee.

“The only way at the time was in Transportation, and I noticed that I was able to share my experience, strength and hope with patients as often as I could when they were down and out,” she said. “When an opening came up in Extended Care, several people approached me about the position, and when the director called me in to talk about it, I left with the job.

“The neat thing about that is that I had put down on my prayer list, a year to the day prior to that conversation, my goal was to become a counselor. Now, from 6-9 p.m. every night, I get to be an example to women who are trying to recover. I think that’s pretty bad ass.”