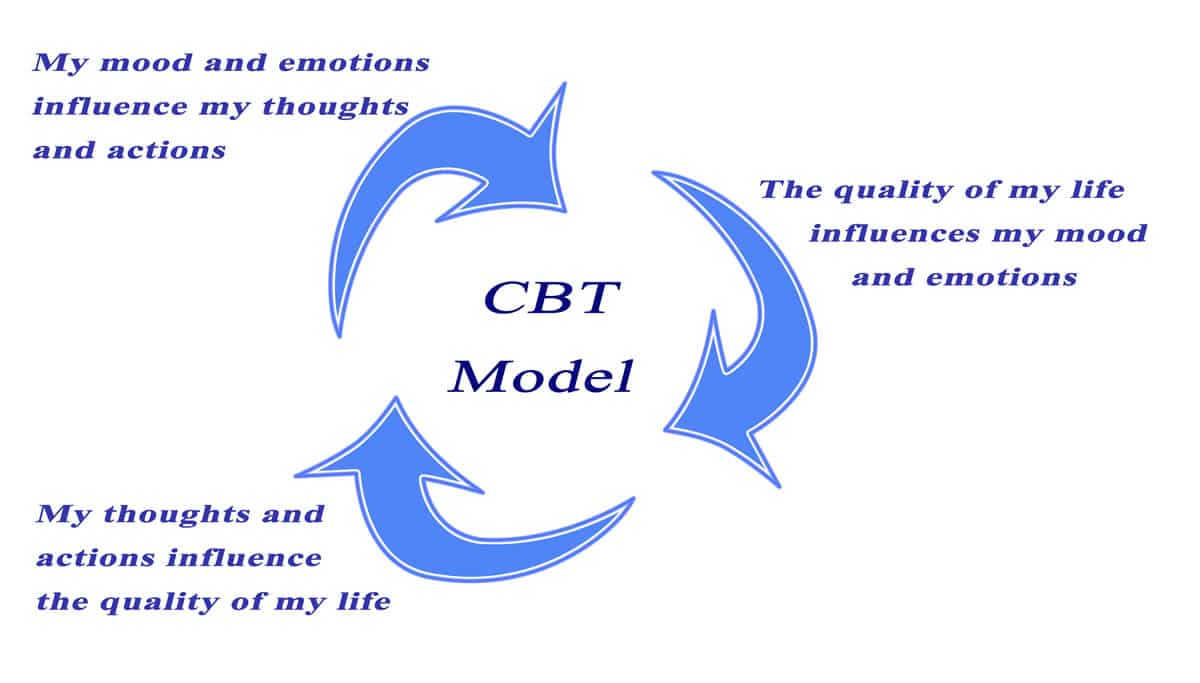 When it comes to a drug and alcohol treatment modality like Cognitive Behavioral Therapy (CBT), it’s always a good idea to ask: Does it actually work?

After all, for addiction treatment, there are as many therapeutic approaches as there are treatment centers, and the efficacy of those approaches is often debatable.

Some drug and alcohol rehabs, for example, still use confrontation therapy, in which patients in denial about the severity of their alcoholism or addiction are “confronted” by peers and staff. More than a decade ago, however, researchers William White and William Miller excoriated the practice, declaring [1] that “four decades of research have failed to yield a single clinical trial showing efficacy of confrontational counseling, whereas a number have documented harmful effects, particularly for more vulnerable populations.”

However, research into Cognitive Behavioral Therapy — or CBT — has consistently demonstrated its effectiveness for a variety of mental and emotional disorders. Originally designed as a treatment for depression, it’s since been adapted by a number of mental health treatment providers, and numerous studies have shown that it gives participants relief beyond the CBT sessions they attend.

So what is Cognitive Behavioral Therapy (CBT)? 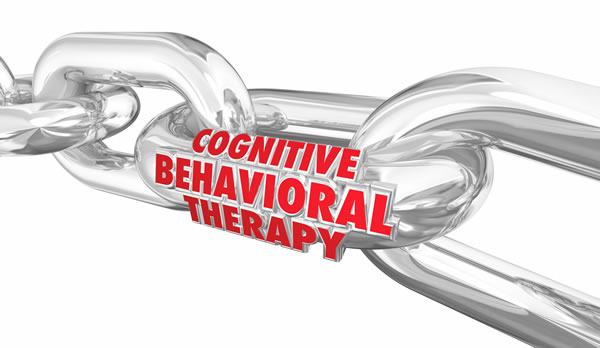 According to the American Psychological Association (APA) [2], “Cognitive behavioral therapy (CBT) is a form of psychological treatment that has been demonstrated to be effective for a range of problems including depression, anxiety disorders, alcohol and drug use problems, marital problems, eating disorders and severe mental illness.”

That’s well and good, but how does it work? To get a full understanding, it’s a good idea to understand where Cognitive Behavioral Therapy (CBT) comes from — and its origins go back much further than contemporary psychology. In fact, a 2015 piece in the Journal of Evidence-Based Psychotherapies [3] points out that the philosophical foundations of CBT can be traced all the way back to ancient Buddhist, Taoist, Existentialist and Greek Stoicist traditions. In their discourse, they trace those origins to the findings of Albert Ellis, one of the originators of CBT, who determined that “there are three fundamental sources of cognitive disturbance which he labeled ‘IB’s’ or ‘irrational beliefs,’ beliefs that caused individuals to react in dysfunctional ways to events in their lives. These three are: 1) ‘I must be successful,’ 2) ‘Others must treat me well’ and 3) ‘Conditions under which I live must be agreeable to me.’”

Greek philosophers — particularly Epictetus, the article points out — recognized this disconnect thousands of years ago: “Men are disturbed not by the things that happen, but by their opinion of the things that happen,” he once wrote, meaning that it’s the perception of events in the lives of men and women that determine the effect they have on the mind. Negative thought patterns developed around the perception of specific events can lead to attitudes, behaviors and feelings that that are psychologically harmful, and in the case of addiction and alcoholism, using and drinking often become maladaptive coping skills to deal with them.

By the same token, the CBT approach also takes its cue from Greek Stoicism and the Socratic Method. According to the National Association of Cognitive-Behavioral Therapists [4], “cognitive-behavioral therapy does not tell people how they should feel.  However, most people seeking therapy do not want to feel the way they have been feeling. The approaches that emphasize stoicism teach the benefits of feeling, at worst, calm when confronted with undesirable situations … when we learn how to more calmly accept a personal problem, not only do we feel better, but we usually put ourselves in a better position to make use of our intelligence, knowledge, energy, and resources to resolve the problem.

How does CBT work? 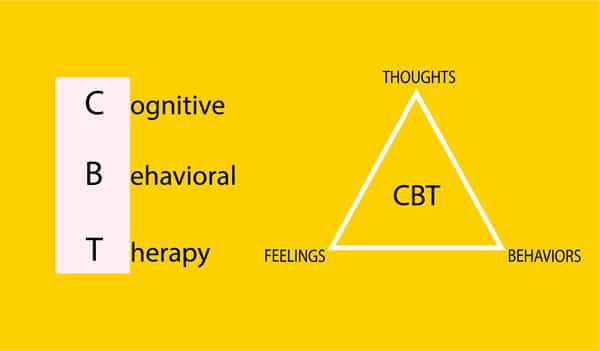 The website goes on to point out that therapists using CBT ask questions of their patients, but more importantly, encourage patients to ask questions of themselves. Someone who sees a group of individuals laughing, for example, might immediately assume they’re being made fun of or privately insulted. A therapist would encourage such an individual to ask, “‘How do I really know that those people are laughing at me? Could they be laughing about something else?’”

According to The Mayo Clinic [5], CBT is generally a four-pronged approach:

This isn’t an overnight process; in many instances, repeated CBT sessions are necessary to break these negative thought processes. Essentially, these processes are built around intense emotional experiences associated with a particular event — something that has led to psychological trauma, no matter how innocuous or tragic it may seem to an outside observer.

In one way of looking at it, the emotions surrounding those traumas are never stored properly within the brain, and whenever the individual recalls or thinks about that trauma, those emotions present as fresh. It’s a psychic wound that never quite heals, and to deal with the lingering pain of such wounds, the afflicted individuals turn to coping skills that may inflict equal, if not greater, amounts of damage — both psychological and spiritual.

Addiction and alcoholism are prime examples.

The role of CBT in addiction treatment

Because the emotions associated with a problematic event in an individual’s life tend to be negative or painful, that person can turn to drugs and alcohol as a way of coping. While there are plenty of social drinkers and even casual “soft” drug users who partake regularly with no ill effects or consequences, those who drink and use to fill an internal void run the risk of developing a problem. And once they become a problem, they can be difficult to overcome, even with CBT, according to a writer for the Beck Institute of Cognitive Behavior Therapy [6]: “When people habitually misuse a psychoactive chemical … they typically receive significant, immediate positive reinforcement (e.g., a sense of ‘high’) as well as powerful, immediate negative reinforcement (e.g., relief from negative emotions and/or withdrawal symptoms). Even when people are motivated to change, these experiences are formidable opponents to healthier, more stable, more meaningful sources of gratification, such as the pride one feels in having the ability to say ‘no’ to urges, the satisfaction of having spent a productive day, and the trust of caring others, including therapists.”

However, the writer goes on to point out, CBT can provide a way out — or rather, a way forward: “In a nutshell, this includes skills in self-awareness (e.g., of the onset of cravings and urges), self-instruction, planning, problem-solving, well-practiced behavioral strategies to reduce risk and to increase enjoyable sober activities, and methods of responding effectively to dysfunctional beliefs (about drugs, oneself, and one’s ‘relationship’ to drugs).”

The founder of the Beck Institute, Aaron Beck, co-authored a novel about this very process in 1993. Titled “Cognitive Therapy of Substance Abuse,” it [7] “describes seven main areas of potential psychological vulnerability, each of which represents a factor that contributes to the patient’s risk of alcohol and other substance misuse, and each of which suggests a potential area for therapeutic intervention.” These include:

In other words, addiction and alcoholism can become traumatic experiences associated with problematic emotions, behaviors and thinking patterns. Fortunately, CBT can be used to treat both addiction and underlying psychological trauma that may have precipitated the addiction. When it comes to substance abuse, Beck writes, the goal of CBT is “(1) to reduce the intensity and frequency of the urges by undermining the underlying beliefs, and (2) to teach the patient specific techniques for controlling or managing their urges. In a nutshell, the aim is to reduce the pressure and increase control.”

So how effective is Cognitive Behavioral Therapy (CBT)?

In a 2006 paper published in the journal Clinical Psychology Review [8], researchers found that Cognitive Behavioral Therapy (CBT) “is highly effective for adult unipolar depression, adolescent unipolar depression, generalized anxiety disorder, panic disorder with or without agoraphobia, social phobia, PTSD, and childhood depressive and anxiety disorders,” “is associated with large improvements in symptoms for bulimia nervosa” (with better results than those found using pharmacotherapy, the study adds) and “has shown promising results as an adjunct to pharmacotherapy in the treatment of schizophrenia.”

But that’s not all: CBT was found to be moderately effective in treating “marital distress, anger, childhood somatic disorders and several chronic pain variables (i.e., pain expression behavior, activity level, social role functioning and cognitive coping and appraisal),” and was even “somewhat superior to antidepressants in the treatment of adult unipolar depression.” Even more importantly: The benefits of CBT “are maintained for substantial periods beyond the cessation of treatment. More specifically, significant evidence for long-term effectiveness was found for depression, generalized anxiety, panic, social phobia, OCD, sexual offending, schizophrenia and childhood internalizing disorders.”

In addition, numerous studies have shown CBT to be effective in drug and alcohol treatment settings. In a 2011 article for the peer review journal JAMA Psychiatry [9], researchers concluded “Providing group cognitive behavioral therapy for depression to clients with persistent depressive symptoms receiving residential substance abuse treatment is associated with improved depression and substance use outcomes. These results provide support for a new model of integrated care.” Even the National Institute on Drug Abuse recognizes the value of CBT in addiction treatment [10]: “Research indicates that the skills individuals learn through cognitive-behavioral approaches remain after the completion of treatment. Current research focuses on how to produce even more powerful effects by combining CBT with medications for drug abuse and with other types of behavioral therapies.”

Such scientific studies on the effectiveness of CBT give it an important distinction: It’s a psychotherapeutic tool that’s evidence-based, which should be a hallmark of any successful treatment protocol. According to a 2017 article in the journal Neurotherapeutics [11], “By incorporating research into clinical practice, providers use research-driven evidence rather than rely solely on personal opinion … incorporating research inevitably promotes the development of guidelines, databases, and other clinical tools that can help clinicians make critical treatment decisions.”

In other words: Evidence-based therapies are guided by more rigorous, peer-reviewed standards, are implemented based on acceptable and ethical practices and contribute to the trust in an organization’s overall standard of care. When included as part of a comprehensive treatment modality for alcoholism and addiction, it can be extremely effective — for dealing with the issues surrounding the substances, and those with which the substances have been used to cope.