If whether or not you seek addiction or alcoholism treatment is dependent on finding a rehab where you can smoke cigarettes, chances are good it won’t be a deal-breaker at most facilities you call.

(It’s important to note, however, that this varies according to geographic location: According to a 2018 report by the Centers for Disease Control, “a third of substance abuse treatment facilities (35%) reported having smoke-free campuses in the 50 states, Washington, D.C., and Puerto Rico.”)

Most drug and alcohol treatment facilities understand the fact that, according to the CDC, “People with mental and/or substance use disorders are more than twice as likely to smoke cigarettes as people without such conditions.”

However, it’s also important to point out that the CDC also reports that those individuals “are more likely to die from a smoking-related illness than from a behavioral health condition.”

So if you’re wanting to get help from a drug or alcohol rehab where you can smoke cigarettes, there’s nothing preventing you from doing so. However, if the goal of treatment is to help you give up, get over and adjust to a life without substances, perhaps it’s not a bad idea to look into opportunities to give up smoking as well.

A Rehab Where You Can Smoke Cigarettes: Hey, We Get It 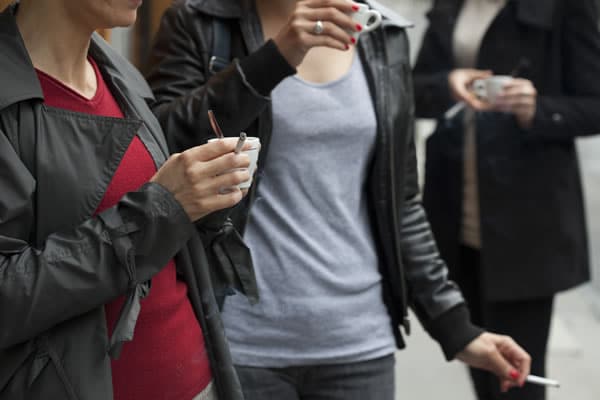 No one will defend a newly recovering addict’s or alcoholic’s right to enjoy a cigarette more than those with years of recovery under their belts who also partake — of which there are plenty. A 2015 paper published in the scholarly journal Substance Use and Misuse found that “a recent review of 42 empirical papers on addiction treatment programs for multiple substances from 1989 through 2005 found that the prevalence of tobacco use among persons in recovery ranged between 65% and 87.2%.” Compare that to the fact that in 2012, only 18.1% of adults in the general population reported smoking cigarettes, and you understand why “individuals in treatment for, or recovery from, alcohol and substance use disorders are one group that continues to use tobacco (cigarette smoking) at rates that concern health practitioners.”

Those numbers vary according to other studies — one reported on in 2015 by Forbes “concluded that the overall rate of smoking among addicts in treatment for drug and alcohol use was 84%, compared with a rate of 31% for individuals of the general public” — but the findings are the same: Addicts and alcoholics, in treatment and in recovery, smoke. A lot.

And some drug and alcohol treatment providers have made bold moves to do something about it. In 2008, the New York Office of Alcoholism and Substance Abuse Services issued a tobacco policy that “required that all publicly funded addiction treatment programs implement smoke-free grounds, have ‘no evidence’ of smoking among staff, and make tobacco dependence treatment available for all clients.” A year later, according to a 2012 paper in the American Journal of Public Health, client smoking rates dropped from 69.4% to 62.8%.

In 2019, the city of Philadelphia issued a ban on smoking at all city-funded addiction treatment programs — roughly 80 of them around the City of Brotherly Love. While there are no hard numbers as to its effects on smoking rates, at least one recovery advocate — Devin Reaves, executive director of the Pennsylvania Harm Reduction Coalition — pushed back in an opinion piece in the Philadelphia Inquirer: “Is cigarette smoking an issue we should address? Absolutely, yes. But this should be done in addiction treatment through engaging people and offering education, nicotine replacement therapy options, smoking cessation resources, and support around individuals goals for quitting — not forcing people to stop smoking or else be barred from inpatient treatment.”

Still, there seems to be a prevailing attitude, even among front-line treatment providers, that given the gravity of a life-threatening addiction to drugs like heroin or a drinking problem that leaves some alcoholics on the cusp of liver failure, giving up cigarettes is a can that can be kicked down the road. Bill Lee, an Assistant Program Manager at the drug and alcohol treatment facility Cornerstone of Recovery, understands that desire from personal experience.

“I smoked for 25 years, and I never saw myself giving it up, not even in recovery,” said Lee, who had roughly a decade of sobriety before putting down cigarettes. “I think part of it is that it’s a drug many of us start with, and it’s there throughout the whole process. On top of that, I think that the denial of what it’s doing to us is much stronger than it is with other chemicals, primarily because the consequences aren’t as immediate.

“When I talk about nicotine dependence in one of the lectures I give, I tell them that I think it would have been easier to quit smoking if every time I lit a cigarette, I had gotten hit in the head with a hammer, because it’s really the consequences that motivate us to stop anyway. But with smoking, a lot of times those consequences are 30 years away.” 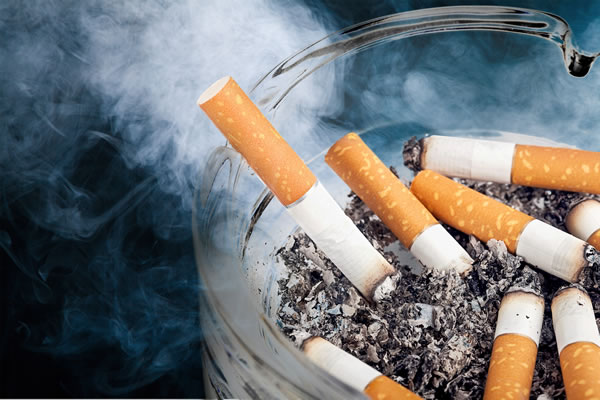 In an ideal world, those seeking a drug or alcohol rehab where you can smoke cigarettes would find a facility that permits it but also offers smoking cessation techniques and therapies for those who want to give up the habit.

Cornerstone of Recovery is one of those facilities. While Cornerstone is not a tobacco-free campus, smoking is permitted in designated areas only. Nicotine dependence is included in the initial intake evaluation for each patient, and there is a semi-organized effort, Lee said, to “help people recognize the risks of tobacco smoking as it relates to recovery rates and death rates.”

“There are some of us who tend to be pretty verbal about the need to start (quitting) now rather than waiting, because really the context of it is, do you want to live a long time, or are you willing to shave a few years off your life?” Lee said. “Generally what happens is that if a patient is interested in quitting, they’ll talk to me after my lecture, and we’ll sit down and discuss it. I’ll ask them the usual questions — if they’ve tried to stop before, what kind of success or lack of success did they have, and how long they’ve been smoking.

“The approach I take is the same as I heard someone say about quitting drinking — they quit every time they passed out. The problem was that they always picked it up again. I quit smoking every time I put a cigarette out. The problem was that I kept picking up another one. My approach is just to help them not have the next one yet. I’ll offer to keep their tobacco products in my office — that out-of-sight, out-of-mind thing, but I always tell them that if they want them, they can always come back for them, and I’ll give them back.

And there is evidence that quitting smoking pays dividends in early recovery — or at the very least, reduces the chances for further harm. Research in 2018 published by the National Institute on Drug Abuse (NIDA) found that “cigarette smoking increased the likelihood of relapse among people in recovery from substance use disorder (SUD)” and that “helping patients quit and remain abstinent from smoking may improve their chances for sustained recovery from use of other drugs.”

In addition, a 2014 study published in the scholarly journal Alcoholism: Clinical and Experimental Research found that, according to study co-author Dr. Timothy C. Durazzo, “Over eight months of sustained abstinence from alcohol, active-smoking ALC (alcohol-dependent individuals) showed poorer recovery than never-smoking ALC on measures of learning, and both former-smoking ALC and active-smoking ALC recovered less than never-smoking ALC on processing speed measures.” In other words: In alcoholics, nicotine “interferes with their neurocognitive recovery during the first stages of their alcohol cessation.”

And yet the prevailing wisdom has long been “that cigarette smoking should not be addressed in the early phases of treatment for fear that incorporating tobacco cessation into the treatment protocol might overwhelm individuals experiencing withdrawal symptoms from alcohol and drugs,” according to the research in Substance Use and Misuse.

A Rehab Where You Can Smoke Cigarettes: And Quit 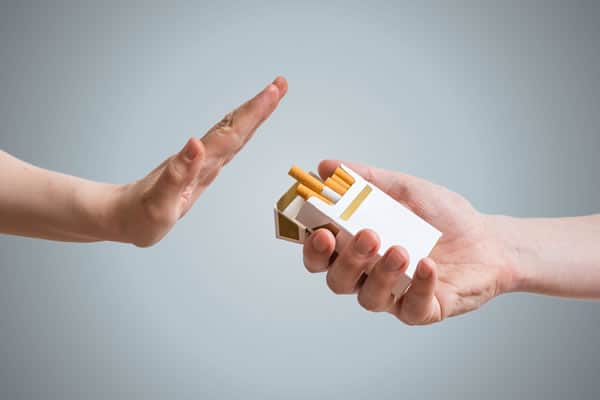 While conventional thought was “that intervening on smoking too early in the recovery process could potentially remove a coping mechanism, or soothing agent, for the anxiety and discomfort associated with withdrawal thereby increasing, rather than decreasing, relapse rates,” or that “cigarette smoking could ostensibly be addressed later in the recovery process after individuals had successfully transitioned through the most difficult and sensitive phases of recovery and entered a more stable period,” some researchers pushed back against that in the early 1990s.

So if you’re a tobacco user in search of a rehab where you can smoke cigarettes, ask yourself this: Do you have the desire to give up smoking while you give up other substances? If not, then a facility like Cornerstone of Recovery won’t push you to do so or remove your ability to do so (in designated smoking areas, of course). But if you do have that desire, wouldn’t it be wise to choose a facility — like Cornerstone — where you can take advantage of the available tools that can help you quit?

“The main thing is that we just keep talking about how they’re doing, if they want to quit smoking, and I help them look for patterns,” Lee said. “Where are they smoking? When are they smoking? I think everybody’s tobacco use increases when they come to rehab, and a lot of people even start smoking, or start dipping and chewing, when they come to rehab, because it’s one of the few drugs available on campus.

“We have this brain disorder, so we’re going to use substances like nicotine or caffeine even if we don’t like them, because that’s all there is. I just put it in the context with other drugs of abuse, but in the end, I remind them that nicotine kills more recovering addicts than all other drugs combined, primarily because of our denial about it and our inability to stop.”