If you follow social media and engage with any news outlets, then stories of addiction inevitably bring out a singular question from a great many people unfamiliar with the disease: Why can’t an addict stop using?

From the outside looking in, it seems like a black-and-white solution: Just quit. Reality, however, is much more complex, and the inability of individuals with substance use disorder — the clinical terminology for addiction — to just put down the drugs and walk away is dependent on a number of variables.

So what are they? Why can’t an addict stop using? When does the initial choice to consume mind- and mood-altering chemicals cross the line into dependence and addiction? Let’s take a look. 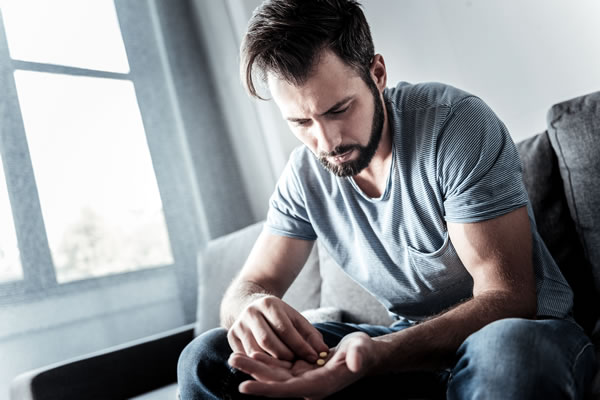 To answer the question “why can’t an addict stop using?,” one must first understand the biological nature of addiction. Different drugs work through different neurological mechanisms, but according to the National Institute of Health (NIH), the end result is the same: The brain is hijacked by drugs.

A healthy brain receives reward from activities that release various neurotransmitters associated with pleasure. A rigorous workout, a good meal, sex — they all promote the release of chemicals in the brain that make individuals “feel good,” and as a result, the brain is motivated to repeat those behaviors, according to the NIH. At the same time, the brain’s “fight or flight” response is connected to the part of the brain that makes decisions that help a person determine whether a risky choice is dangerous or not.

But, as the NIH continues, “when you’re becoming addicted to a substance, that normal hardwiring of helpful brain processes can begin to work against you. Drugs or alcohol can hijack the pleasure/reward circuits in your brain and hook you into wanting more and more. Addiction can also send your emotional danger-sensing circuits into overdrive, making you feel anxious and stressed when you’re not using the drugs or alcohol. At this stage, people often use drugs or alcohol to keep from feeling bad rather than for their pleasurable effects.

“To add to that, repeated use of drugs can damage the essential decision-making center at the front of the brain. This area, known as the prefrontal cortex, is the very region that should help you recognize the harms of using addictive substances.”

“Brain imaging studies of people addicted to drugs or alcohol show decreased activity in this frontal cortex,” says Dr. Nora Volkow, director of NIH’s National Institute on Drug Abuse (NIDA). “When the frontal cortex isn’t working properly, people can’t make the decision to stop taking the drug — even if they realize the price of taking that drug may be extremely high, and they might lose custody of their children or end up in jail. Nonetheless, they take it.”

On top of that, according to the American Psychiatric Association, “these changes can last long after the immediate effects of the substance wears off, or in other words, after the period of intoxication. Intoxication is the intense pleasure, euphoria, calm, increased perception and sense, and other feelings that are caused by the substance. Intoxication symptoms are different for each substance. When someone has a substance use disorder, they usually build up a tolerance to the substance, meaning they need larger amounts to feel the effects.”

Why Can’t an Addict Stop Using: The Long-Term Effects 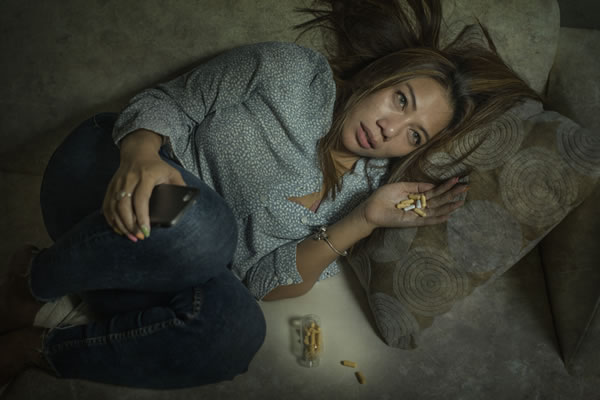 While certain drugs act in certain ways to promote a flood of various feel-good chemicals throughout the brain, the release of dopamine is what promotes drug-seeking behavior — and understanding this goes a long way toward answering the question, “Why can’t an addict stop using?”

According to the NIDA, “large surges of dopamine ‘teach’ the brain to seek drugs at the expense of other, healthier goals and activities. Cues in a person’s daily routine or environment that have become linked with drug use because of changes to the reward circuit can trigger uncontrollable cravings whenever the person is exposed to these cues, even if the drug itself is not available. This learned ‘reflex’ can last a long time, even in people who haven’t used drugs in many years. For example, people who have been drug free for a decade can experience cravings when returning to an old neighborhood or house where they used drugs. Like riding a bike, the brain remembers.”

But are drugs that powerful? If the brain can get a feel-good boost from healthy activities like exercise, why isn’t that good enough? The NIDA has an excellent analogy: “For the brain, the difference between normal rewards and drug rewards can be likened to the difference between someone whispering into your ear and someone shouting into a microphone. Just as we turn down the volume on a radio that is too loud, the brain of someone who misuses drugs adjusts by producing fewer neurotransmitters in the reward circuit, or by reducing the number of receptors that can receive signals.”

As a result, the pleasure someone experiences from healthy activities is diminished, which “is why a person who misuses drugs eventually feels flat, without motivation, lifeless, and/or depressed, and is unable to enjoy things that were previously pleasurable. Now, the person needs to keep taking drugs to experience even a normal level of reward — which only makes the problem worse, like a vicious cycle.” By the same token, repeated drug use means that the brain and the body “adjust” to the level of neurotransmitters released by a drug’s mechanism of action — to the point that in order to achieve the “high” the individual seeks, more drugs will be required to do so.

This is known as tolerance, which takes place “when a person no longer responds to a drug in the way they did at first,” the NIDA reports. “So it takes a higher dose of the drug to achieve the same effect as when the person first used it. This is why people with substance use disorders use more and more of a drug to get the ‘high’ they seek.”

Increased use leads to physical dependence, which “means that when a person stops using a drug, their body goes through ‘withdrawal’: a group of physical and mental symptoms that can range from mild (if the drug is caffeine) to life-threatening (such as alcohol or opioids, including heroin and prescription pain relievers).” While dependence isn’t the same thing as addiction, the NIDA adds, “if a person keeps using a drug and can’t stop, despite negative consequences from using the drug, they have an addiction (also called a severe substance use disorder).”

So Why Can’t an Addict Stop Using? 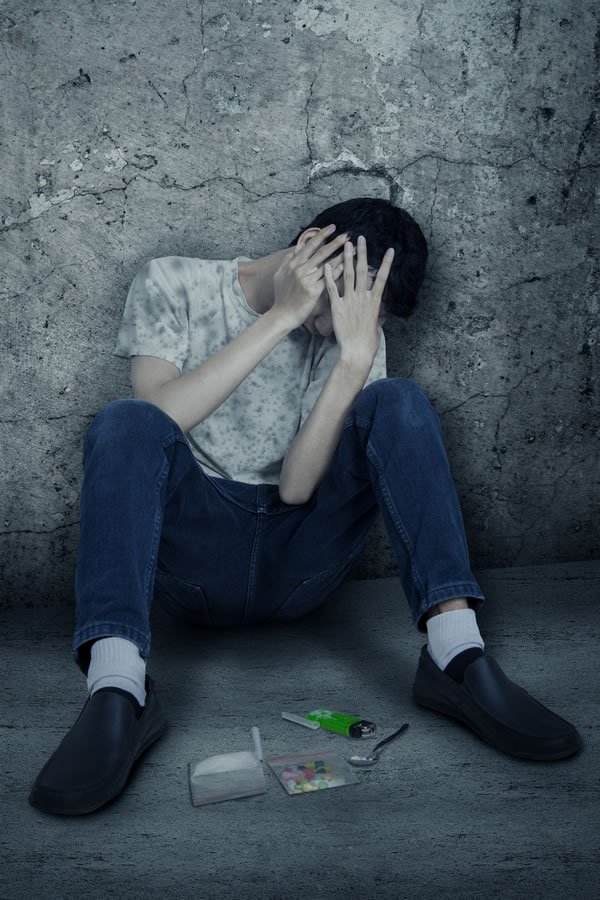 Even those with a drug problem find themselves asking, “why can’t an addict stop using?,” and they often set out to be one of those who do. As the NIDA reports, “Although some people are successful, many attempts result in failure to achieve long-term abstinence. Research has shown that long-term drug abuse results in changes in the brain that persist long after a person stops using drugs. These drug-induced changes in brain function can have many behavioral consequences, including an inability to exert control over the impulse to use drugs despite adverse consequences — the defining characteristic of addiction.”

The best route for sustained recovery, and abstinence from drugs, lies in understanding the biological component of addiction, as well as the need for psychological treatment, the NIDA continues: “Psychological stress from work, family problems, psychiatric illness, pain associated with medical problems, social cues (such as meeting individuals from one’s drug-using past), or environmental cues (such as encountering streets, objects, or even smells associated with drug abuse) can trigger intense cravings without the individual even being consciously aware of the triggering event. Any one of these factors can hinder attainment of sustained abstinence and make relapse more likely.”

Relapse, or the return to active drug use, is commonplace among those with a substance use disorder. Unfortunately, because of the stigma associated with addiction, any return to drug use is seen as a “failure,” either of an individual’s willpower or the treatment process itself. That’s not the case at all, a group of experts told ABC News several years ago: “Gantt Galloway, PharmD, a scientist in the Addiction Pharmacology Research Laboratory at the California Pacific Medical Center Research Institute in San Francisco, explains, ‘If we look at recovery as a lifelong process that may include one or many relapses, a far more realistic view of success emerges. We need to think of a treatment trajectory: it may take five, seven, nine times before they get it. Chronic depression has similar success rates. Seizure patients? The noncompliance rate is just as high. High blood pressure? All they have to do is take their medicine. It's not as difficult as staying sober, but the rate of noncompliance is just as high.’”

According to Dr. Jonathan Morrow, speaking with the University of Michigan Health blog, “the severity of an addiction and its triggers can vary from person to person — and genetics and life experiences can play a role. It is common to relapse and go back into drug use because of intense subconscious yearnings.” Early recovery is often spent on resistance of a return to drug use, through a number of various psychotherapeutic tools — many of available through a 30-day treatment stay at a drug rehab. Various counseling and therapeutic techniques help addicts identify what are known as “triggers,” those aforementioned psychological cues tied to drug use that can set off a cascade effect of desire known as a craving.

To the outside observer wondering “why can’t an addict stop using?,” it may make little sense. But, Morrow pointed out, ““Addictions are fundamentally irrational. People may lose their job, their family and everything they care about, but the drug doesn’t care about those things. It activates subconscious parts of the brain that mindlessly draw them back to the drug, regardless of the consequences.”

The good news, however, is that addiction treatment can make a world of difference, as the NIDA emphasizes: “Research indicates that active participation in treatment is an essential component for good outcomes and can benefit even the most severely addicted individuals.”

“Why can’t an addict stop using?” is a valid question from the perspective of someone who doesn’t understand addiction. For those who do, the better question, however, is, “What does an addict need to stop using?”