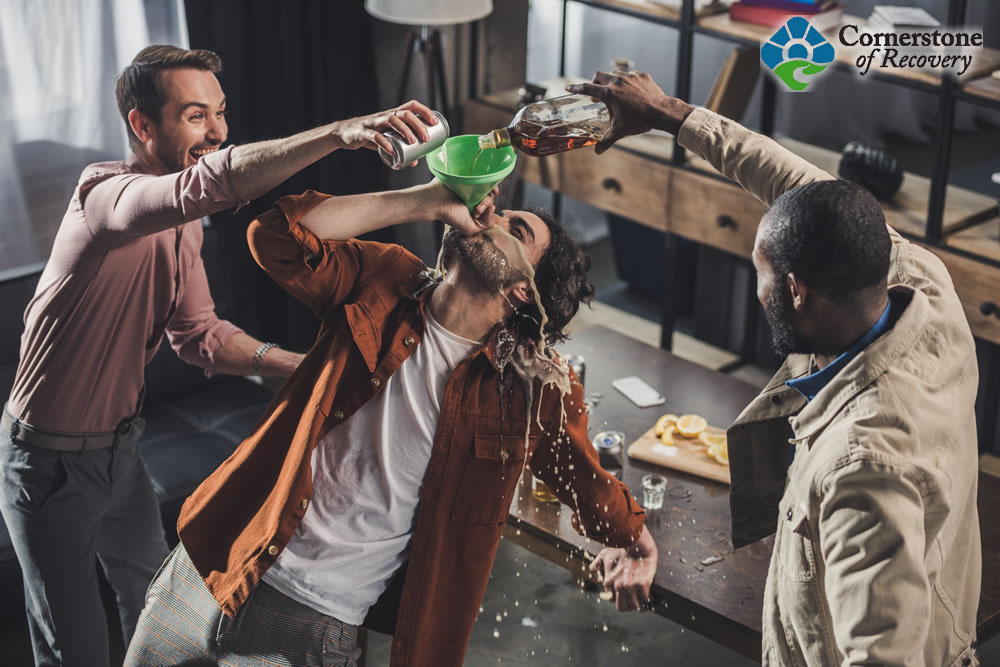 If you spend any amount of time in social situations where alcohol is involved, you’ve probably run across that one person who concerns you.

Perhaps it’s a close friend. Maybe it’s a family member. It might even be your spouse or partner. Inevitably, they drink a little too much, a little too often. If everyone else is pleasantly buzzed, that person is “trashed,” as it’s colloquially known. If everyone else needs to call a cab because they had a few too many, that individual has already passed out and needs to be carried to the car.

It’s easy, and part of human nature, to look the other way. After all, suggesting that someone may have a drinking problem often seems like an accusation, but that shouldn’t be the case. Alcoholism is a disease recognized by medical professionals around the world, and if we wouldn’t hesitate to suggest that someone who suffers from some other malady seek help, then why would we turn a blind eye to an ailment involving alcohol?

What to look for

It’s important to remember that alcohol affects everyone differently. If you’re a social drinker, you might feel a pleasant buzz after a couple of cocktails, while your companions may feel nothing or a lot more inebriated. To determine whether you should approach someone about a drinking problem, it’s important to remember not to judge them by the standards of your own consumption.

That said, if the individuals about whom you’re concerned are people you associate with on a regular basis, then you’ve probably developed a keen eye for their habits, especially if their drinking concerns you. So how do you spot a potential alcoholic? First of all, remember there’s no hard and fast checklist, but there are certain habits that might indicate a problem, according to health professionals of the website Verywell Mind:

What you can do

It’s important to note that while these signs may indicate a potential problem, they’re hardly a professional medical diagnosis. For one thing, alcoholism has been replaced in the contemporary medical lexicon by the term “alcohol use disorder,” and there are varying degrees of that disorder. For example, according to the health information website HelpGuide, “not all alcohol abusers become full-blown alcoholics, but it is a big risk factor. Sometimes alcoholism develops suddenly in response to a stressful change, such as a breakup, retirement, or another loss. Other times, it gradually creeps up on you as your tolerance to alcohol increases. If you’re a binge drinker or you drink every day, the risks of developing alcoholism are greater.”

If you feel reasonably confident that the person about which you’re concerned has a problem with alcohol, there are a number of ways you can help them. It’s certainly not something you should bring up in the moment; those who are inebriated will often be resistant to anything you have to say, and the fact that you confront them while they’re drinking will immediately put them on the defensive.

Having a conversation with someone who may have an alcohol problem is something we’ve written about previously. You may be hesitant to do so, but given the fact that alcoholism can lead to serious health problems and even death, not doing so may lead to regrets down the road. Do your research, plan a course of action and don’t hesitate to reach out to alcohol treatment professionals who can offer suggestions for a successful intervention.

At what point is alcoholism treatment necessary?

Remember: Alcoholics aren’t bad people; they’re sick people. And as with most illnesses, they need all the support they can to get better. And like most ailments, they don't have to arrive at death's door before help is sought.

There are those alcoholics who recognize that their lives have become unmanageable. They may not articulate it or discuss it openly, but it might surprise you how desperate they are for help if the subject is broached. Sometimes, a simple conversation is all it takes to nudge them in the right direction.

Other times, they hang on to the facade of normalcy until all of the trappings of the term "functional" are stripped away. In those situations, an intervention may be necessary. You can attempt one yourself, but you will likely have a better chance of success by involving drug and alcohol treatment professionals to assist you. After all, approaching a loved one about a drinking problem is often fraught with emotional tension, and there are a number of things you should NOT do during an intervention.

The most important thing to remember is that there's never a wrong time to encourage your loved one to seek help. They may be "functioning," but that doesn't mean their lives aren't unmanageable; it doesn't mean they're not lost in an emotional maelstrom of depression and self-loathing; it doesn't mean that they can't find a new way to live through alcoholism treatment that will allow them to flourish without the bondage of their disease.

Treatment doesn't have to be a last resort. In many instances, it can be serve as a redirection for a life and a career that are slowly slipping away. A "functioning alcoholic" is still alcoholic, and alcoholism treatment is always the best course of action for those so afflicted.