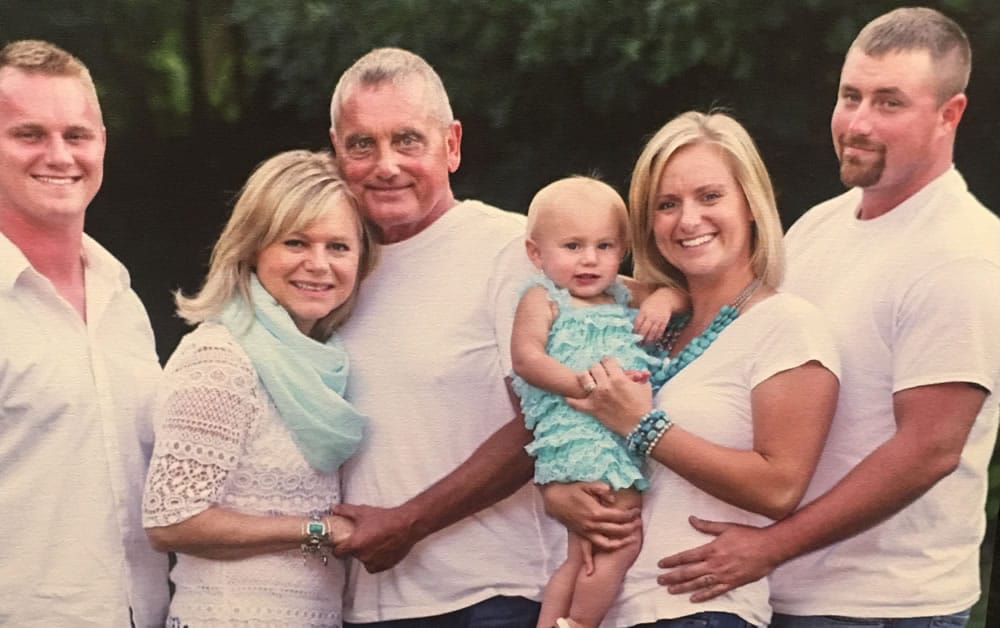 It was the 38th Friday of the year when a dedicated group of employees opened the doors to Cornerstone of Recovery on Sept. 22, 1989, full of hope tempered by the grim reality that their quaint little start-up venture faced steep odds of survival. 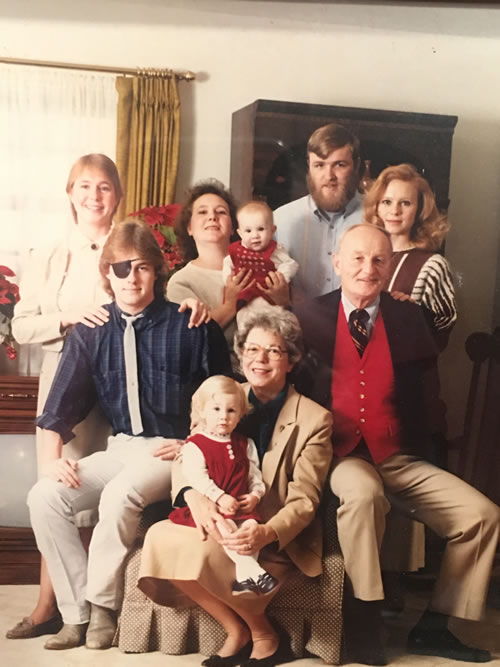 The autumnal equinox was still a day away [1], but the weather in East Tennessee that day heralded its impending arrival: a high of 73 and a low of 64, according to the Weather Underground archives [2], but the skies were filled with fat clouds that would distribute 1.42 inches of rain in that 24-hour period. While the average sliding rainfall total for September is slightly less than 3 inches [3], September 1989 would almost triple that amount.

Around the world, the headlines were much the same as they are today, with death and mayhem dominating the news cycle. In Deal, England, the Provisional Irish Republican Army detonated a time bomb at the British Royal Marines School of Music Building; the structure collapsed, killing 11 and injuring 21 [4]. American composer and lyricist Irving Berlin, widely considered one of the greatest American songwriters in history, died at the age of 101 [5]. Shortly after midnight, Hurricane Hugo, a Category 4 storm, came ashore at Sullivan’s Island, S.C. [6], damaging up to 80 percent of roofs in the city of Charleston and laying waste to the cities of Mount Pleasant, Awendaw and McClellanville.

It wasn’t all gloom and doom, of course. On NBC, a soap opera about a group of lifeguards led by actor David Hasselhoff debuted on that day. "Baywatch" would be canceled after a single season but find a second life and international success when it was revived in 1991 [7]. French-Canadian pianist and singer-songwriter Cœur de pirate, and South Korean singer and TV personality Kim Hyo-yeon were both born that day. Americans may have even given a cursory acknowledgement to the 127th anniversary of the issuance of the historic Emancipation Proclamation [8], which President Lincoln delivered on Sept. 22, 1862.

No one quite remembers who turned the lock on the front door at 1120 Topside Road, where Cornerstone of Recovery first opened for business after receiving provisional accreditation from the Joint Commission to offer treatment services to addicts and alcoholics. It wasn’t like there was a line of folks waiting to get in, anyway — that stretch of road is spartan today, even more so back then, and to most folks passing by, it was the first door in a nondescript strip mall on the outskirts of Knoxville, Tennessee, and nothing more.

Inside, however, a beaming William J. “Bill” Hood had enough faith to go around. The facility, which celebrates its 30th anniversary on Friday, Sept. 20, was the culmination of a divinely ordained mission, he believed.

“I remember my dad telling me about it, and he was very excited — and it never occurred to him that it wouldn’t work, not ever,” says Susan Hood Toth, whose brother, John, will speak at Friday’s 30th anniversary ceremony. “It really didn’t. That’s what strong faith he had in it. He felt this was what God’s will was for him.” 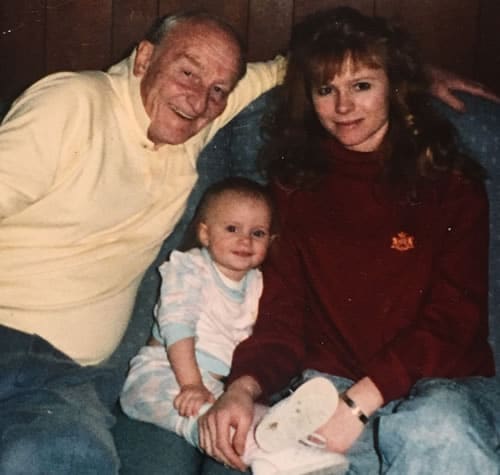 Bill Hood, left, with his granddaughter, Lauren, and his daughter, Susan Hood Toth, sometime in 1990.

These days, Sue is a grandmother, but at the time, she was preparing to make Bill and Jean Hood grandparents themselves: She and her husband, Larry, would give birth to a Hood grandchild, Lauren, in November of that year. The Hood family is still close, despite the loss of the patriarch in 1993, three years after Cornerstone first opened.

It wasn’t always that way, however.

“When he was actively drinking in Ohio, I had a boyfriend at the time, and I remember we looked up Al Anon (a 12 Step support program for family members) meetings and were going to go,” she says. “I remember saying, ‘OK, mom, we’re going to this meeting,’ and I remember my dad sitting there in his chair, which was molded to his body, and saying, ‘Goodbye! Tell them what a drunk I am!’”

When Jean moved to East Tennessee so Bill’s parents could help her raise her younger brother, Sue remembers sitting down with her mom and trying to plan a life around her father’s alcoholism.

“I went to an Al Anon meeting with my mom, and I walked away feeling like a thousand pounds was lifted from me — like, ‘Wow, this is not just my family,’” she says. “It was a real eye opener, and I remember expressing that to my mom, but she didn’t feel any of that relief, because she was still in so much pain. And I remember sitting down with her and asking, ‘What job skills do you have?’ She had worked as a dietician at some point, and we really looked at that as being maybe something she could do — because obviously, something had to be done.”

When Bill Hood went to Peninsula Hospital in 1979, it was his third trip through a treatment center for his alcoholism. Even then, his spiritual awakening was slow in coming, Toth says: Just as he had the previous two times, Hood refused to surrender control over his life, and after the alcohol was removed from his system, he was convinced that he could drink again.

“I remember him telling us that he was fully convinced that he wasn’t an alcoholic, that he thought, ‘When I get out of here, I’m going to go for a drink. These people are crazy. I don’t have a problem,’” she says. “But then, four or five days before his dismissal, he had a moment of clarity, and when he did become sober, he became a totally different guy.”

Putting the pieces in place 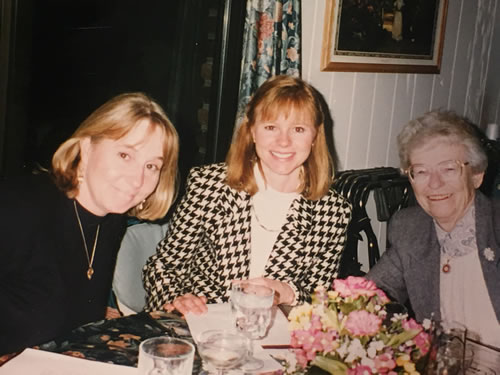 Over the next decade, Hood threw himself into sobriety, and when restructuring at Peninsula Hospital led him to step away from the facility, he began canvassing all available resources to launch Cornerstone. He and his wife, Jean, had inherited the family’s lake house, and he mortgaged it for startup money. He used what he had inherited from his late parents. And he approached his own family, including his sister, Marmie, and the husband of his wife’s cousin, who owned a business in the Toledo area.

He also approached Susan and her husband, Larry.

“We didn’t invest a whole lot, but I was impressed that he asked us,” she says. “I think that speaks to just how convinced he was that it would be successful, because he was willing to ask his own family to be a part of it. He was definitely all in, and I don’t think he was truly expecting a return for a long time.”

Susan was seven months pregnant with her daughter, Lauren, on that fateful September day when the doors to Cornerstone were first opened. She would give birth in November of that year, and the Hoods were doting grandparents to the girl, as they were to the others who came before her. As passionate as Bill was about family, however, he was equally as passionate about recovery and the facility in which others like himself could discover it.

At first, plans to operate Cornerstone as a treatment resort at Tapoco Lodge, just across the North Carolina line, concerned her: Hood took the family to tour Tapoco, and the accommodations were lavish by the standards of drug and alcohol treatment, Toth remembers thinking.

“They only had a couple of patients at that time, and I remember they had steak on the menu for dinner,” she says with a laugh. “I remember thinking, ‘He’s going to put my mother in the poor house — this is going to be a disaster!’ I just remember the look of fear on my mom’s face, and while I never said anything, I kept thinking, ‘Oh my gosh, what have you done?’”

The Higher Power in which Hood believed, however, soon brought an end to his North Carolina dreams. When that part of the venture was shut down, and operations were confined to Topside Road, that’s when Cornerstone began to grow, she says.

Guided by a divine hand 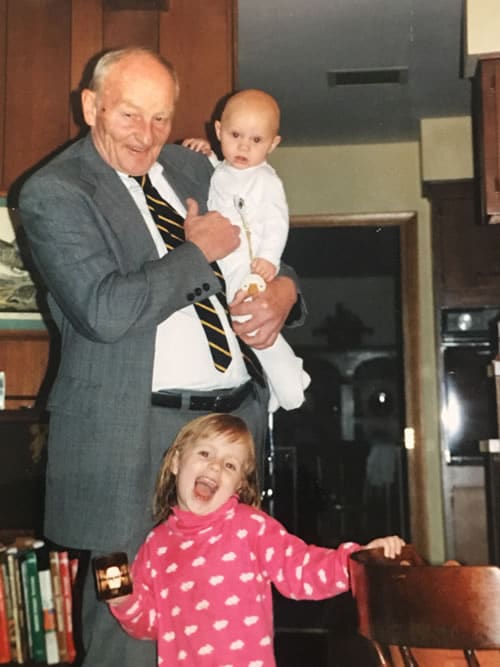 Bill Hood with his grandchildren: Nick Toth and Lauren Toth, at his feet. Their mother, Susan Hood Toth, estimates this picture was taken only a few months before his death in 1993.

Toth only visited Cornerstone a time or two, on her trips down to East Tennessee to visit her parents, but she has a few fond memories. Some are second-hand stories, like the ones about her father convincing vendors and business partners to settle Cornerstone’s accounts for a percentage of what the treatment center owed. Others are personal observations, like walking in to the office Bill shared with the late Polly Bales, one of the facility’s co-founders, and being greeted by billowing clouds of cigarette smoke.

“I walked in, and there was so much smoke, I couldn’t really see either one of them,” she says with a laugh.

There were, of course, worrisome times. As investors, the Toths never felt the pinch, but she does remember the concern her mother expressed in those early years, and how her Aunt Marmie stepped in with a much-needed cash infusion. It was never a money-making venture while Hood was alive, she points out — but he was never in it for the money anyway.

“I do know that my dad never saw it really turn (a profit),” she says. “It was starting to, right before his passing, but he never reaped any of the benefits. He never took a penny out.”

In that respect, she’s reminded of the Biblical story of Moses, who led his people to the Promised Land but was unable to enter it himself. His faith never wavered, however, and from afar, she’s watched her family’s company continue to surpass any expectations those involved might have had when it opened for business on Sept. 22, 1989.

“Even the building at 1214 Topside (opened in 2003), it was remarkable that we were able to build that,” she says. “Nobody ever thought we could ever have needed more space than that, so when it came time to build the new campus (at 4726 Airport Highway), we wished we had reinforced the ceiling, so we could have just added a second level. But there was no way we would have ever had suspicions that we would have grown that big, ever.”

Even her father, optimistic as he was on Sept. 22, 1989, likely couldn’t have envisioned that Cornerstone would grow, 30 years later, to one of the largest private residential addiction and alcoholism treatment centers in the state.

“God’s hand has definitely been on it from day one, no question about it,” she says. “He always said that when he realized he wouldn’t see any reward for it, that Cornerstone is going to be for the next generation. But even then, there’s no way that he would have envisioned this.

“But I know he’s smiling. And he’s happy. He planted a lot of good seeds, and it all came back.”