Can alcoholics drink nonalcoholic beer? It’s a fair question, especially in the heat of summer, when a sweaty job of mowing the grass is often followed by the thought, “a cold beer would be nice right now.”

And despite the trappings of alcoholic consumption — namely, to drink as much as possible, as quickly as possible, to get as drunk as possible — there are those in recovery who actually enjoyed the taste of beer. Perhaps they thought of themselves, before their drinking problem grew out of control, as beer connoisseurs. Perhaps one of the biggest impediments to recovery was having to give up something they enjoyed, at least before their drinking habits took a dark turn.

There’s a wealth of information on the internet about the dangers, or lack thereof, of individuals in recovery choosing to indulge in nonalcoholic beverages. But can alcoholics drink nonalcoholic beer? The consensus seems to be this: Some can, and some do, but every person who makes a decision to do so needs to weigh his or her motives, consider his or her recovery and choose wisely. 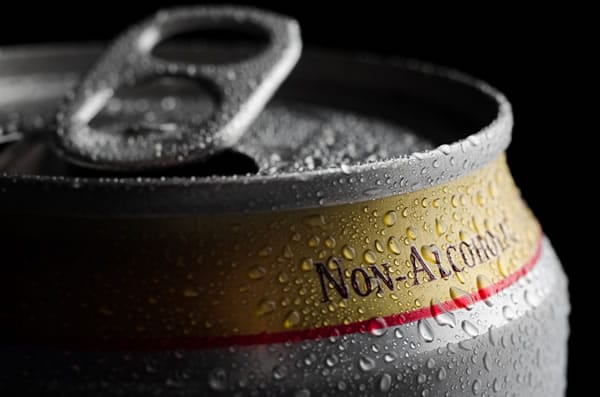 Nonalcoholic beers date back to Prohibition, when the Volstead Act was enacted in 1919, making alcohol effectively illegal in the United States. According to the website Gizmodo, the law made illegal any beverage that was “0.5 percent alcohol by volume (ABV). If that number sounds familiar, it’s because that percentage has stuck, and ‘non-alcoholic’ beers today still have 0.5 percent ABV as their upper limit. So, some of the large breweries began making ‘near beer,’ stuff that was very pale, didn’t have much flavor, and was right at 0.5 percent ABV.”

When Prohibition ended in 1933, however, nonalcoholic beer didn’t disappear completely, according to the website Mixer Direct, because consumers actually liked it, and “some drinkers still wanted a beer that tasted like the non-alcoholic option. In light of this, many American brands created bland, light beer because of this consumer preference.”

But while American breweries developed blander options that would become full-alcohol brands like Budweiser and Busch and Miller, there was little demand for true nonalcoholic beers, at least until the craft and home-brewing renaissance of the 1990s. Then, according to Popular Mechanics, nonalcoholic options began to gain traction again, “fueled by changing consumer habits and brewers’ successful tinkering with the complex processes required to make it.” Between July and September 2020, the magazine continues, “NA beer sales were up approximately 38% in the U.S. compared with the same period in 2019, according to data analytics group IRI. Craft operations dedicated to NA suds have sprung up across the country, not to mention beer giants like Heineken and Anheuser-​Busch — the maker of Busch NA and O’Doul’s, two long-running NA beers that clock in below 0.5% alcohol by volume (ABV) — which are also investing millions to launch alcohol-free products.”

However, if you’re wondering “can alcoholics drink nonalcoholic beer,” it’s important to keep in mind that many products advertising themselves as “nonalcoholic” actually do contain some alcohol … and for some, more than what they advertise. According to a 2010 study published in the Canadian Journal of Clinical Pharmacology, out of a study of 45 NA beers, “Thirteen (29%) of the beverages contained ethanol levels higher than the declared concentration on their label. Six beverages claiming to contain no alcohol were found to contain greater than 1% ethanol.”

So what does that mean for those in recovery from alcoholism? Can alcoholics drink nonalcoholic beer? 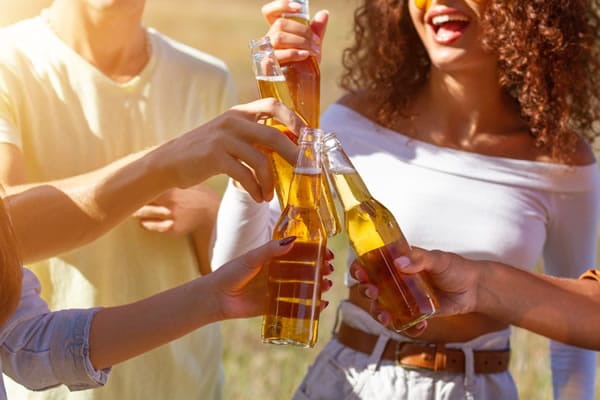 It’s important to remember that nonalcoholic beers — most of them, anyway — still contain alcohol. It may not be much, but it’s in there, as a writer for the website I Am Sober points out: “To be marketed as ‘alcohol-free’ beer, the product needs to contain less than 0.5% alcohol. This means that it’d take about 10 bottles of non-alcoholic beer to equal 1 normal beer. It’s highly unlikely for a person to become drunk from drinking non-alcoholic beer, but it does still contains alcohol.”

And while that may seem like no big deal, this is where the recovery concept of “playing the tape all the way through” comes into play. If you’ve never heard of it, it’s a psychological tool in which addicts and alcoholics are urged to consider the ramifications of such a decision — beyond just the initial good time that drinking and drugging always promised. As Katie MacBride, writing for Healthline, points out, “as someone who was so severely addicted to alcohol that some mornings I drank cough syrup or mouthwash just to get my hands to stop shaking, I don’t mess around with even small amounts of alcohol.”

While MacBride goes on to point out that “Brands like Heineken and Budweiser have started producing alcohol-free beer … not ‘a little alcoholic’ beer, but genuinely 100 percent alcohol-free beer,” it’s not so simple as substituting a beverage with no alcohol whatsoever for one that used to contain it … not when the ritual around drinking was almost as addictive for some of us in recovery as the drinking itself.

One writer for the website NA Beer, a clearinghouse of information about nonalcoholic beverages, puts it this way: “The thrill of drinking even an alcohol free beer could become a slippery slope that leads back into drinking alcoholic beverages. This because the taste is really similar to that of traditional beers and other beverages. The smell and taste may be enough to trigger a relapse in some individuals as it could bring the person back to a period before recovery.”

How, you may ask? The nonprofit recovery organization the Stout Street Foundation puts it this way: “Tasting beer can trigger euphoric recall, which is the memories of the good times of drinking. For an addict or alcoholic, part of the disease is having difficulty remembering or acknowledging all of the negative consequences of active addiction.”

And anyone who’s made it through early recovery has a more than passing familiarity with cravings. As the National Institute on Alcohol Abuse and Alcoholism puts it, “The words ‘urge’ and ‘craving’ refer to a broad range of thoughts, physical sensations, or emotions that tempt you to drink, even though you have at least some desire not to. You may feel an uncomfortable pull in two directions or sense a loss of control.”

So … Can Alcoholics Drink Nonalcoholic Beer? 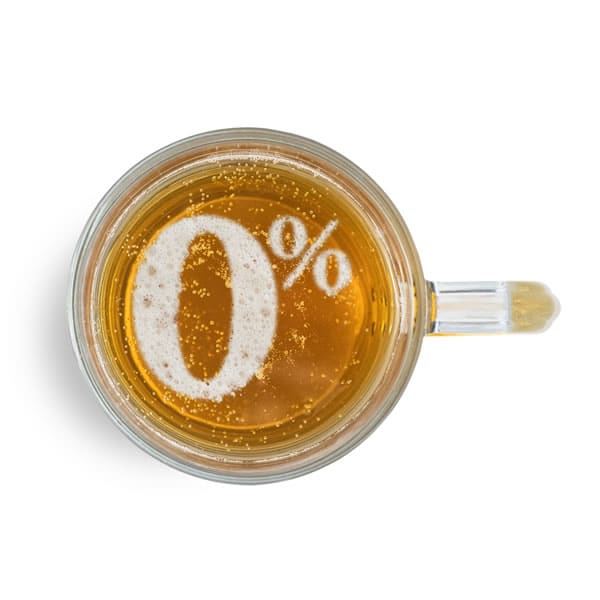 If you ask Google “can alcoholics drink nonalcoholic beer,” you’ll get a multitude of responses, including some from individuals who maintain sobriety blogs. These individuals stress the importance of responsible decision-making, but they also detail how they arrived at their own decision. Blogger Jean McCarthy, who maintains the blog UnPickled, admits that she never gave drinking a nonalcoholic beer much thought until a sober friend questioned her decision. She even posed the question online and found that “many (Alcoholics Anonymous) discussion board participants are adamant that drinking NA beer is considered a relapse and many recovery organizations say avoiding it entirely is a best practice.”

However, she continued, her opinion was based on her own sobriety and experience, and she advises readers to “know your triggers and stay away from them.”

“I eat some food that is cooked with wine (i.e. pasta, soups and stews) but I don’t eat deserts such as tiramisu or rum cake,” she writes. “I feel safe drinking NA beer and the occasional NA cider, but I don’t drink de-alcoholized wine. To me, the benefits of having a NA beer delivered to my table outweigh the risks of ordering a mocktail and possibly getting the wrong drink. I stay aware and keep myself safe, but what works for me might not work for someone else.”

Blogger Kelly Fitzgerald Junco, a.k.a. “the Sober Senorita,” acknowledges similar warnings by those in recovery about nonalcoholic beers: “From what I’ve heard and read online, most 12-step programs advise against consuming non-alcoholic brews. They say it’s a slippery slope. Just the smell of something similar to alcohol could be enough to trigger a craving and lead to a relapse. Some people suggest that pretending you are drinking alcohol is  ‘romanticizing the drink’ and can be dangerous.” However, she continues, while she understands that point of view, her own experience is contrary to it: “Personally, it doesn’t do that for me.

“I believe the decision to indulge in ‘fake drinks’ is a personal one,” she continues. “For myself I think non-alcoholic beer is a blessing. I can indulge when I am at a social gathering, out to dinner, or after work on a long day. It helps me feel not left out, it gives me the momentary feeling that I am not different, and yes it acts maybe as an alcoholic drink would for normal people — it takes the edge off. The best part is — it’s not an alcoholic beverage and I don’t have to worry about controlling my drinking, getting myself in trouble, being hungover, and all the other bad behaviors that went right along with my drinking.”

However, both Junco and McCarthy stress the importance of individual choice — and the fact that their experiences are their own and shouldn’t be taken as a wholesale affirmative to the question, “can alcoholics drink nonalcoholic beer?”

Every recovering addict and alcoholic needs, as the NIAAA points out, to be aware of his or her triggers, and to do two things:

In short, if you’re wondering, “can alcoholics drink nonalcoholic beer?,” ask yourself this: Are the rewards of doing so worth the risk to your sobriety? If the answer is no, then don’t do it.