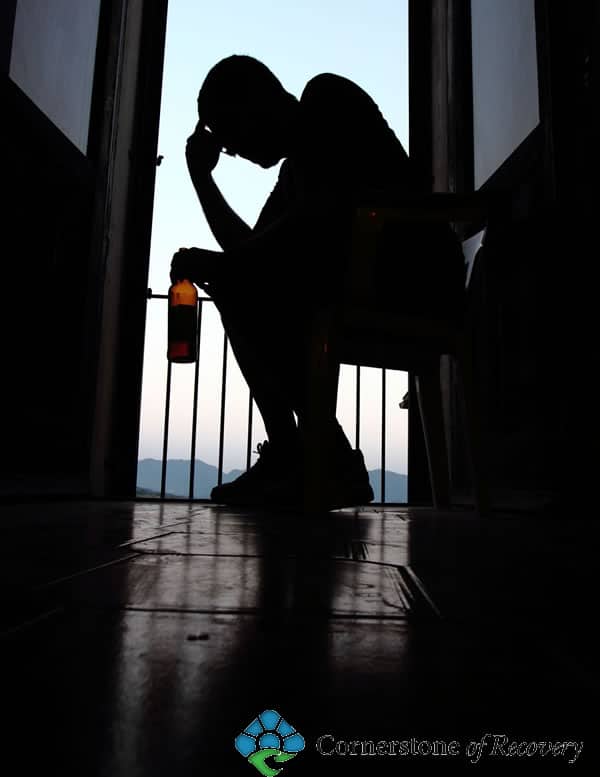 Back in February, Jessica Booth wrote a piece for the MSN Lifestyle page that was eye-opening, to say the least. "I stopped drinking completely for two years — and it showed me how the world treats sober people differently" is one woman's account of self-imposed sobriety and the reactions of those in her everyday circle to it.

After battling with ulcerative colitis, she made the decision one morning to swear off booze altogether. A decision made for health reasons, not because her life was unmanageable — but what she found, she writes, was "that giving it up made me feel like a total outcast." At most social events, she details, the subject of her sobriety inevitably came up, and simply declaring that she was "good" never seemed to be an adequate answer:

"At some point, someone (an acquaintance, a friend of a friend, maybe even a total stranger) will inevitably ask why I'm still sober. In the beginning, when I was embarrassed by my condition, I would make excuses. If I said I was tired, they would roll their eyes, offering to buy me a shot. If I said I didn't feel well, they would quickly inch away, assuming I was contagious. If I said I couldn't mix alcohol with a medication I was on (which is true), they would offer me a story of when they mixed alcohol with medication, and they were fine, just fine."

Still others, she continues, seemed to take her sobriety personally: "Several times, my statement that I'm not drinking has been met with someone saying something along the lines of, 'Ugh, boring!' which, surprisingly, does not make me feel spectacular. More often than not, people seem slightly annoyed with the idea that I'm going to stay sober for the night. Every once in a while, someone seems personally offended that I won't let them buy me a drink, even after I become clean about the real reason."

Needless to say, she never went to meetings or to a drug and alcohol rehab center, because — at the risk of being repetitive — her drinking wasn't tied to a disease that made her life unmanageable because of her alcohol consumption. However, she writes, she begins to discover some truths about herself through her abstinence that sound remarkably similar to recovery principles: "It took me over a year to get comfortable with my real self: a girl who likes to be with her friends, but who isn't great in a huge crowd, and someone who will likely never be the life of the party. I stopped trying to force myself to go out and accepted that maybe I just didn't want to go out. Maybe I liked quiet nights with friends or my fiance or my family members more than being in a bar — and that was okay."

Although the thought of living life without alcohol (or drugs) may seem terrifying to those who have yet to give it a try, the goal of recovery and sobriety isn’t to don the robes or habits of a religious order and live under measures of austerity that deny us pleasure. If the goal of a recovery program is to teach us a new way to live, we can certainly apply those principles to do the things that bring us joy, and to do them without feeling as if our recovery is in jeopardy every time we do so. Drugs and alcohol — especially the latter — are so prevalent in our society, in fact, that we’re assailed by their consumption on a daily basis. Whether it’s a TV ad for beer or dining in a chain restaurant where the barstools are always full, we’re unable to insulate ourselves from the suggestions that we should drink, and it’s pointless to lament that fact.

As time goes by, we begin to understand that not drinking and using is the only decision we need to make to live happy, productive lives. We find ourselves able to be in the company of those who order a beer or a glass of wine without staring at it in envy; we find we can stand in a crowd of fellow rock ‘n’ rollers and scream for the band’s latest hit without having to have a drink in each hand. We realize that we don’t want to withdraw from the rest of the world because so many people in it are able to drink and use casually, and why should we? After all, there are others who are allergic to gluten or shellfish or strawberries, and they don’t deny themselves the simple pleasure of a meal at a restaurant; they simply take the precautions needed to safeguard their own health, just as we do when we venture out among “normal” people.

Life in recovery, we discover, can be adventurous, fulfilling and fun — without the need to drink or use. As long as our motives are in check, we can participate in these things that bring us joy without fear of relapse. Relapse, after all, is not a monster waiting in the shadows to shove a bottle between our lips or a pill down our throats; it’s a conscious decision we make, and if our recovery is strong, we can move freely in the world of “normal” people, even those who imbibe, without the constant specter of our old way of life reasserting itself. We can stand on our own two feet, decline anything put in front of us and instead focus on the reason we attend these events in the first place — to live life instead of hiding away out of fear that our disease will leap from the bushes and overpower us.

As recovering addicts and alcoholics, that freedom is a powerful defense against any negativity we may encounter over our decision not to drink or use.