It had been a crazy day in Cornerstone of Recovery’s Women’s Program, where she serves as a therapeutic assistant. Like many members of the clinical team, Toni wears a great many hats — as one of her coworkers described, “Toni is the one behind the scenes making sure the women are up, their rooms are cleaned, they’re on time for groups; she does AMA (discharging Against Medical Advice) blocking and gets them to and from on and off campus appointments.”

But patient drug screens need to be logged into the system, and she spent a good chunk of that evening worrying about it.

“The weight on me that night!” she said. “I know we need to document them, and I was expecting to get in trouble when I went in to tell Patty (Brewer, assistant director of the Women’s Program) the next morning. And Patty said, ‘Was that the worst thing you did yesterday?’ And I said, ‘Well, yeah.’ And she said, ‘OK.’

“‘OK.’ That was all she said. That’s how (her co-workers) are — they’re amazing, and they’re supportive. Any time I need to just sit and collect my thoughts, I can. They allow you to take whatever time you need when it gets really stressful, and they take care of you. I’ve never had a job like that. I totally, wholeheartedly appreciate them, as well as everyone at Cornerstone.” 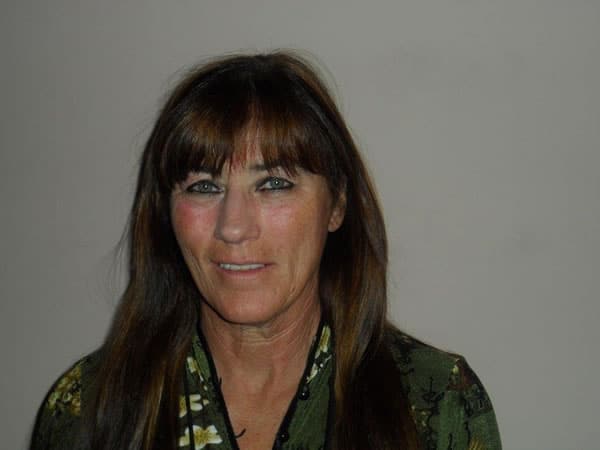 To be fair, it’s the least Cornerstone can do for an employee like Toni. Spend enough time on campus, and you’ll see her zip by on one of the golf carts … escorting a newly minted Intensive Outpatient client up to the Polly Bales Building … checking on the Women’s Program clients in the Fitness Center … answering the phones in Assessment and Orientation. She’s still a woman of many hats, and she’s no stranger to hard work.

She grew up in Canisteo, New York, in the Finger Lakes region of the state, about an hour and a half from Rochester. It was a bucolic upbringing in gorgeous countryside of which East Tennessee reminds her, she said, but in high school, she moved to Florida. As a young woman, her parents settled in Tennessee, and to keep an eye out for their needs, she followed. In 1990, she enrolled in Tennessee Technological University in Cookeville, and while she graduated in 1994, she stayed in Cookeville until her children were out of high school.

“I didn’t want to move them, because I wanted them to have that stability,” she said. “I worked at Tennessee Tech; I did some painting and a lot of odd jobs. I worked three jobs at one time to put food on the table, and I didn’t see my kids much. I hated that, but you’ve got to do what you’ve got to do.”

In 2003, she moved to East Tennessee to accept a job at Cornerstone of Recovery. She had been working with foster children, and working as a counselor in the various programs was an eye-opening experience, she said.

“I didn’t really understand (addiction), but I paid attention, and I learned a lot of things,” she said. “I’m that kind of person that I like to be able to understand the people I’m trying to help, and the first time I saw the 12 Steps, I remember thinking, ‘Wow — I’ve applied those to my own life to get me through!’ It really was kind of an amazing a-ha moment. I’m not in recovery, but I learned so much that I can’t even begin to tell you. God has a way of putting you in a place where you need to be, and coming to Cornerstone helped me out with a family member tremendously.”

The honor of watching them grow 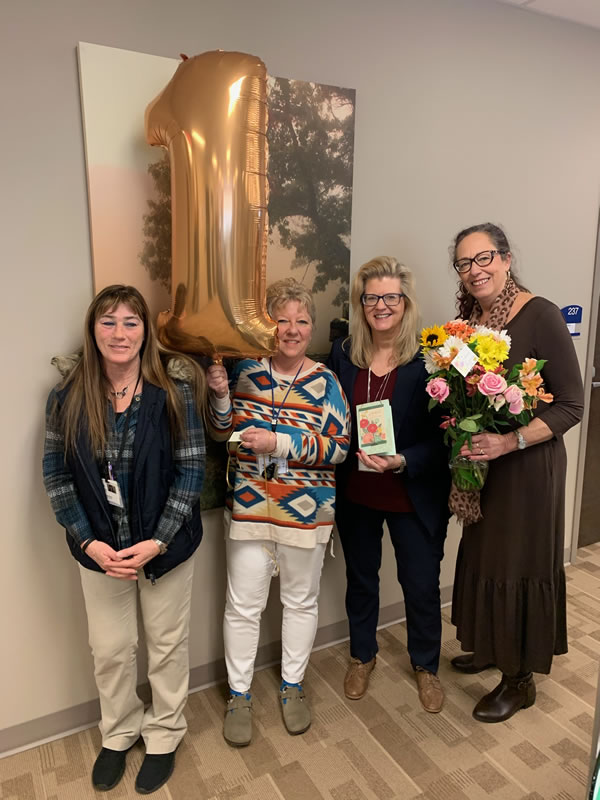 In January, a former patient in Cornerstone's Women's Program celebrated one year clean and sober. To mark the occasion, she reached out to the program's therapeutic staff to thank them for getting her started: Toni Pierce (from left), Patty Brewer, Anne Young and Debbie Hartman.

In 2006, she returned to foster care work for the next decade, working temporarily at Ridgeview Behavioral Health in Oak Ridge before returning to Cornerstone in 2016. Shortly after her return, the new campus opened, and the Women’s Program was launched.

“It helped tremendously when they put that in place, because it helped the women to be able to talk about their things,” she said. “They work on their Schemas and things like that, but if there’s any kind of abuse, they’re not going to talk about that so easily if it’s a co-ed group.”

Today, she’s an integral part of the Women’s Program — as well as a part of the A&O team who pitches in on Mondays, Tuesdays and Thursdays to help where it’s needed. Her days are long — 12 hours or more, on occasion — but when she’s not here, she can usually be found on her motorcycle. (She owns two — a 2004 Harley-Davidson Sportster 1200 XL Custom, and a 2007 H-D Street Glide.)

“I’m an outdoors person,” she said. “I don’t sit much — it’s hard for me! But riding my motorcycle is my mindfulness, my best of both worlds. I don’t have to talk to anybody, and I can just be within myself, and then if we stop for an hour over lunch, I get the camaraderie — and then I’m back on it again. It gives me that sense of freedom to do my mindfulness, and it’s where I do my best thinking.”

And she’s always thinking. Even more than that, she’s always observing — and that, she added, is probably the best part about her job.

And, she said, it’s a spiritual bonus that can’t be measured by conventional methods.

“Here’s what I tell people: If this is just a job to me, I don’t need to be here,” she said. “It’s not just a job to me. I don’t take it that way, because it’s a life or death situation, and I’m part of that equation. Am I a little hard on the girls? Sure I am, because I don’t want them to die. I think they know that, and I think they know I love them, just as they know I’m going to be hard on them when I need to be.”

I ask Toni five questions, without any premeditation or forethought. She answers in the same manner.

QUESTION: If money wasn’t an option, what kind of bike would you buy? ANSWER: “Probably just another Street Glide. It’s a good bike! I’d have to (customize) it to fit me — the first one I got, I couldn’t even reach the kickstand the first time I got on it. That was a little tough that day … but I rode it like a boss.”

Q: Where’s your favorite place to ride around here? A: “The mountains. Twisty roads. I like to play on my curves.”

Q: What’s your favorite music? A: “Anything by Tesla, or 3 Doors Down. I see (3 Doors Down) every year at Harrah’s (Casino), because I’m part of Bikers Against Child Abuse — I’ve been a member for six or seven years — and we do a bike ride for the Better Life Foundation to go see them, and all the proceeds go to kids.”

Q: “Favorite food from back home in New York that you can’t find down here?” A: Orville’s hot dogs. That was actually a bar, and it was just a homey, ‘Cheers’-type of family bar. The doors were always open, and if you were a kid, you could just traipse in there and say, ‘I want a hot dog!,’ and he would bring one out. It was the best.”