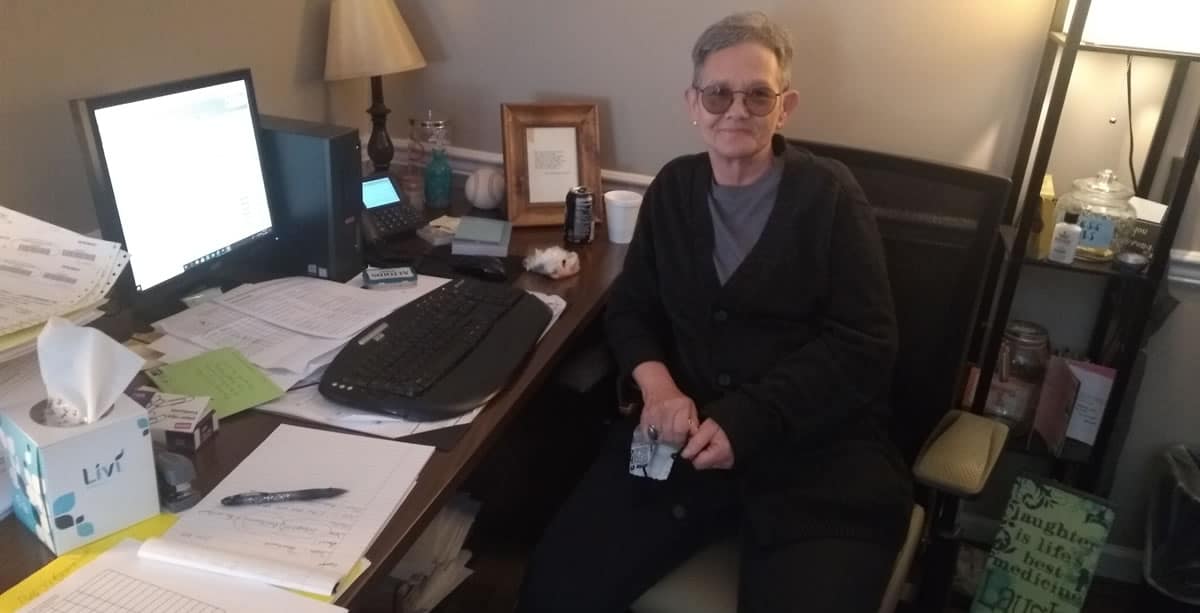 Susan Mullaly is a badass. 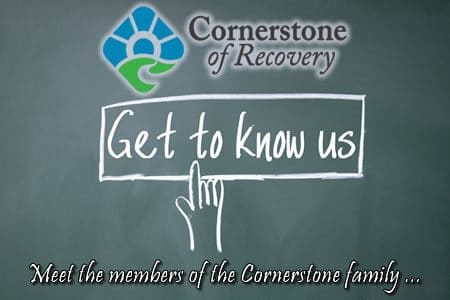 Don’t believe it? Ask to see her bracelet, a trinket gifted to her from a patient. Inscribed on the underside of it, discreetly engraved so as not to offend delicate eyes: “You’re a badass.”

It’s a sentiment shared by many of the patients in the professionals Intensive Outpatient groups she supervises as an Extended Care counselor at Cornerstone of Recovery, men and women whose identities are wrapped up in their vocations. Recovery is a journey of discovery, and it’s a sometimes painful process for those individuals to accept that why they do is a part of who they are — but it doesn’t define them.

“You’ve got to kick them in the ass sometimes,” Susan says. “The biggest thing about professionals is that they think they are what they do — and nobody is what they do. I try to make them aware that their job is what they do; it’s not who they are. I say this a lot: ‘The reason you’re here is because you’re big ol’ drunks and drug addicts, and the hook was your license.’ Because of that, they often like to say, ‘I have to be here,’ and I tell them, ‘No, you don’t: You can be anywhere, or you can be nowhere.’ You’re choosing to be here, but what you do is just a part of the person you’re supposed to be.”

Sometimes, though, those professional retreat behind their credentials under Susan’s brooks-no-bullshit gaze, peeking out only to question her qualifications. What, they ask, was her occupation?

“I tell them I’m very well qualified: I was a drug dealer,” she said with a laugh.

It was not, however, the glamorous stuff of Hollywood movies. In fact, Susan got sober on Dec. 31, 1982, after being arrested with 84 quaaludes. She was 22 at the time and was already a drug and alcohol treatment center veteran.

“I went to treatment once before when I was 19, and I was the youngest person the ever had,” she said. “All of the patients were much older than I was, and they all told me that it was a phase, that they’d spilled more on their tie than I’d ever drank, all of that. The staff was great — they never said anything like that, but unfortunately, I started listening to what the other patients were saying, and I agreed.” 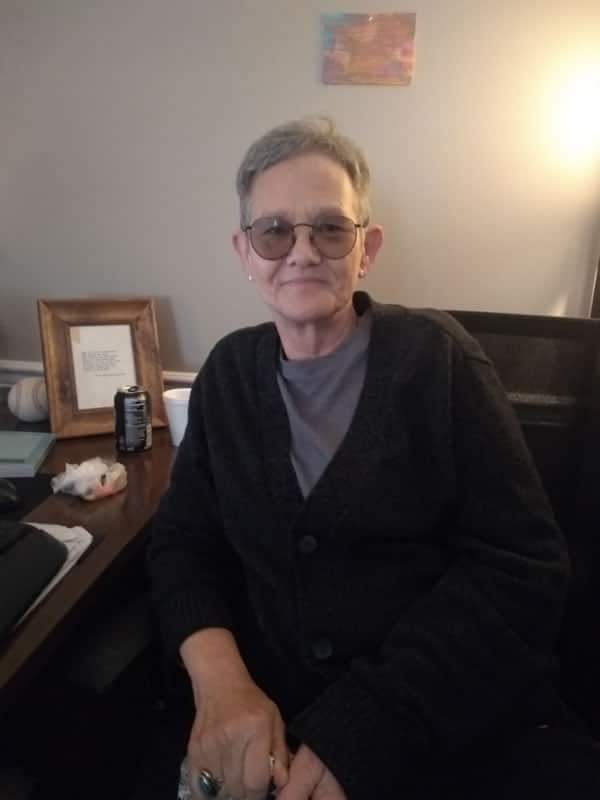 She’s often asked if she picked Dec. 31 as her clean date as some sort of New Year’s resolution — but honestly, she said, she didn’t even know what day it was. In fact, she and her partner at the time were on their way to commit suicide together, in a remote location, but the cops got to them first. As part of her sentence, she was sent to residential inpatient in Virginia for three months, and it was there that recovery found its foothold in her young hear.

“The people who saved me were (Alcoholics Anonymous) members who came in and picked up patients to take us to meetings,” she said. “It was in Blacksburg, Virginia, and I remember one time there was 18 inches of snow on the ground. I just knew I wouldn’t be going anywhere that night, but then all the sudden, this woman named Joyce from AA came trudging in. I couldn’t believe it, but she told me she learned how to put chains on her tires when she was drinking so she could go get alcohol, so why would snow stop her from getting to a meeting?”

Like many individuals in recovery, working in the drug and alcohol treatment field was a convenient career placeholder after she got sober: “I thought I’d do this for a little while until I figured out what I wanted to do with my life,” she said. “That was 35 years ago.”

She entered the Cornerstone orbit in the 1980s, when her first treatment job at Peninsula Hospital — working in the Youth Chemical Dependency unit with 12- to 18-year-olds — introduced her to Bill Hood, Polly Bales and Dan Caldwell. A native of East Tennessee — she grew up in Farragut — she almost didn’t get the job, she said, because administrators thought she looked too young. That, she told them, would work to her advantage: Her youthful appearance would help patients feel more comfortable about opening up.

After three years, she went to work for the University of Tennessee Medical Center as a mental health tech, staying there for almost a decade. Between treatment positions, she went to work as a receptionist at Knoxville Business College when an old UT colleague called and suggested she apply at Cornerstone of Recovery. After a brief stint as a counselor in the Adult Residential Program, she transitioned to IOP and stayed until 2001. From there, she went to Parkridge Valley Hospital in Chattanooga (where Matt Callihan of Stepping Stone to Recovery, who was director at the time, hired her) for almost four years, followed by 2 ½ years at Focus before returning to East Tennessee and working for more than four years at English Mountain.

After leaving there, she worked briefly at the Florence Crittenton Agency and Steps House before returning to Cornerstone in December 2013. It was, she said, a homecoming of sorts. She remembers fondly hearing of Bill Hood’s Cornerstone dreams before the doors opened. She recalls how John Hood, Cornerstone’s executive vice president, was a lifeguard at Peninsula when she worked there, and how “we had to keep all the female (patients) away from him, because he was so hot!” she said with a laugh. She was one of a select few staff members who took care of Miss Polly, making sure she got home and checking her mail when she became unable to drive.

After starting off once again residential, she again made her way to Extended Care, where she’s remained ever since, working closely alongside Janet Hicks as part of the Professionals Program team. It’s a badge of honor that some of her coworkers were once her patients, but Susan is too humble to take credit for their sobriety — all they did, she added, was listen, just as she did when she was getting sober.

“I always wanted to be like my first sponsor, Bonnie Ferrell: I wanted to have what she had, so I was with her all the time, and she was one of the best counselors I ever had in my life,” Susan said. “I just want to show people that there’s always hope, and it’s a privilege to be able to instill some tools in them to do that. ‘Work hard in silence, and let your success be your noise’ — I’ve always liked that.”

I ask five questions, with no premeditation or forethought put into what they’ll be. Susan answers in the same manner.

QUESTION: What was your favorite alcoholic beverage? ANSWER: “Miller Lite. But when I started drinking, they didn’t have light beer yet! And then when I got sober, I tried to keep it light by drinking Tab, which was godawful shit, even if you put lemon in it.”

Q: What was the most meaningful sobriety medallion you received? A: “My fourth year. Bonnie gave it to me, and my parents came (and her father gave her an engraved Zippo that said, “Architect in Adversity”). It was a meeting in East Knoxville at the Phyllis Wheatley Center.”

Q: What do you do for fun? A: “Well, I moved back home to take care of my parents who are elderly, so mostly I read. I just read Patricia Cornwell’s latest. I started reading her when I was working at UT, and she wrote ‘The Body Farm,’ which I loved, because I went to UT for forensic anthropology. But I realized I work better with living people rather than dead people, so I switched over.”

Q: Got any pets? A: “Wolfie. She’s a Chihuahua terrier mix, and a rescue. My dad got her for me, and she’s named after Eddie Munster’s stuffed werewolf on ‘The Munsters.’”

Q: Is there a particular class of professional that stands a better chance of making it in recovery? A: “Well, the research shows that if they’re involved with the monitoring boards, they’ll have so much success, because they have more time that they’re supervised. But if they work on building their recovery, it won’t matter about the monitoring board. The monitoring board starts out as a necessary evil, but if they hang their hats on their recovery, it becomes about that instead of catering to the board … and that’s when they have their best shot.”