Labor Day weekend 1985 was the last hurrah for Anne Young, the Director of Residential Programs at Cornerstone of Recovery.

She remembers vividly driving up to a hotel in the mountain resort town of Gatlinburg, where her cousin tended bar. The liquor was plentiful that weekend, and the mission was succinct: finish it off.

“They were actually closing the hotel, and our goal was to get rid of all the liquor in the bar,” she recalled this week, on the eve of the 35th anniversary of her sobriety. “I was really up for that, so we spent the weekend drinking as much alcohol as we could and literally dancing on the tables. In the process, I remember I lost my grandmother’s beautiful sapphire ring from Hong Kong that she’d given me.”

Driving back home the following Monday, she dreaded a meeting her father had insisted she take with representatives of Peninsula Hospital, the combination psychiatric facility and drug and alcohol treatment center in rural Blount County, Tennessee. The week prior, she’d gone in for a drug screen and evaluation “because things were not going well in my life,” she says, but she had stopped doing cocaine before that.

She didn’t realize, however, that everything would show up.

“I hadn’t done it for a few days, but I didn’t understand I needed to stop doing everything else,” she says. “All the things clearly in my system from the drug screen told me I did qualify for treatment for alcoholism and drug addiction.” 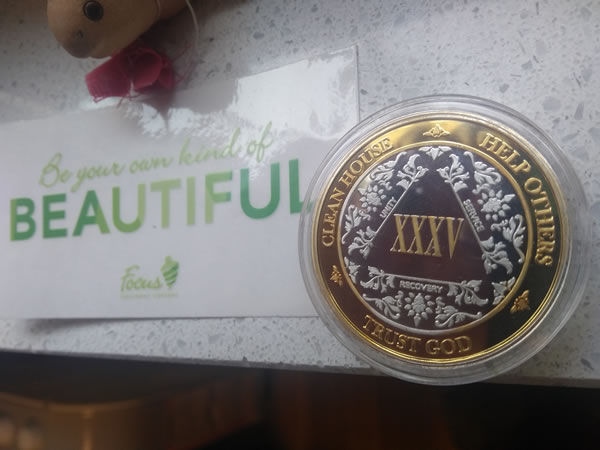 She was immediately flooded by three emotions, she remembers: shame, “that my father and mother were getting this news also,” she says. “Guilt, that I was not the daughter they thought I was going to be. And relief that, ‘Oh, that’s what’s wrong with me. I’ve got an answer.’”

Thirty-five years later — her sobriety date is Sept. 3, and her coworkers helped her celebrate the occasion with cake and well wishes — she holds fast to those three emotions, and in doing so is able to empathize with the patients who come to Cornerstone of Recovery and feel the same. In a way, losing that precious ring during her final weekend of drinking was symbolic of the loss of her true self to drugs and alcohol … and it didn’t take long into the treatment process for her to realize that she was on the precipice of a great and wonderful change.

“I really didn’t like myself, and I really didn’t like my life,” she says. “I felt like there had to be more, and I remember being in treatment, probably about my third week, and having a spiritual awakening. I realized that my life had been that way because I was supposed to do something with the information I was being given — that I was supposed to be a part of this field and help others.”

It helped, of course, that the team overseeing her treatment at Peninsula was made up of iconic figures in the East Tennessee recovery community: among others, Bill Hood, who would establish Cornerstone in 1989; Dan Caldwell and Polly Bales, two of Bill’s trusted confidants who worked to get Cornerstone off the ground and helped ensure its success after Hood died in 1993; and Bob McColl, a long-time Cornerstone therapist.

From patient to employee 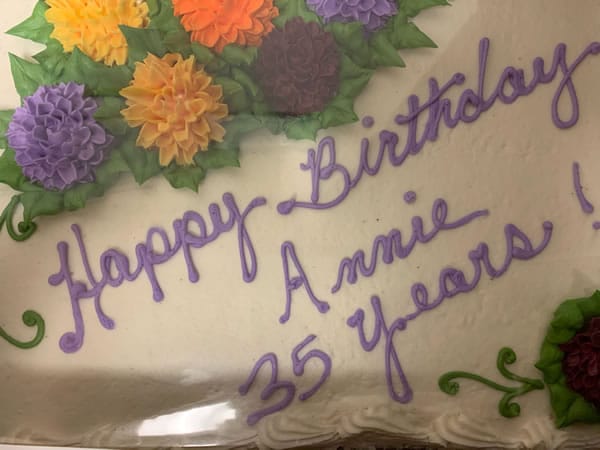 Young's coworkers brought her a sobriety birthday cake on Thursday of this week.

She went to Hood and McColl when she had four months clean, in fact, and asked for their blessing to begin work with adolescents at the new Peninsula Village program. The program’s new director, Patti Mitchell, facilitated groups at the sober living facility where Young lived was impressed when Young suggested role-playing a scenario to help a young adult resident resolve a problem at school. When she found out Young had a teaching certificate, she invited her to be a part of the new venture.

“She told me about starting this adolescent program, and she wanted me to be her first staff,” Young recalls. “I asked Bill and Bob if I should do it or not, and they both said they had some reservations, but probably!”

For the next 22 years, Young was a fixture at Peninsula in various therapeutic capacities, and when her time there came to an end, she decided to dust off her educational skills and teach again. Halfway through the year, however, despite her love of teaching music to middle schoolers in Knoxville, she ached for the opportunity to get back into the drug and alcohol treatment field. That’s when Julie Hamlin, the Director of Extended Care at Cornerstone of Recovery, called.

“Julie and I had worked together at (Peninsula) Village — me, Julie and (Cornerstone Trauma Therapist) were all partners,” Young says. “When Julie called me and said, ‘I need a spiritual advisor,’ I said, ‘Oh my God, please let me do that!’”

Her first spiritual groups were with the Intensive Outpatient Program participants at Cornerstone, and she knew immediately that she was “home,” in a sense. She finished out her year as a teacher, and when a position opened for the director of Cornerstone’s Recovery Renewal and Young Adult programs, Young jumped at the chance to come to Cornerstone full time. That was in October 2009, and once again, she found herself back in the field in which she knew she belonged shortly after getting sober. 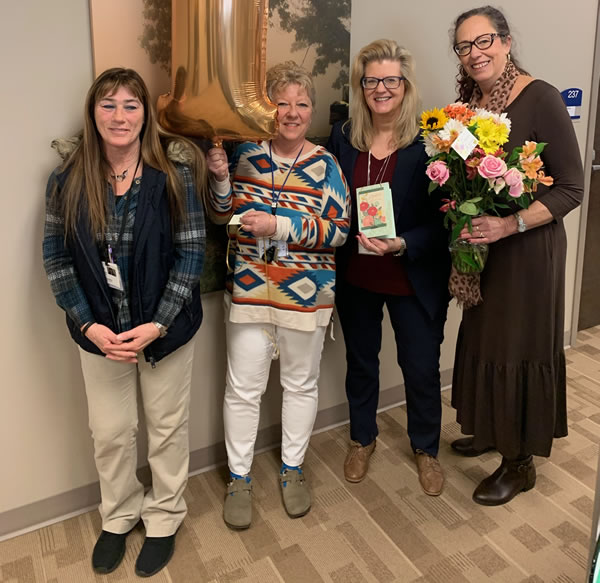 Treatment team members Toni Pierce (from left), Patty Brewer, Anne Young and Debbie Hartman were honored by a former patient who sent them cards, flowers and a balloon when she celebrated a year sober.

It is, she likes to joke, one way she’s stayed sober:

“I’ve never left treatment!” she laughs. “I’ve been in treatment for 35 years!”

Along the way, she’s remained teachable, drawing on the experience, strength and hope of mentors in the field who have guided and nurtured her: Mitchell, who gave Young a chance as part of that initial Peninsula Village clinical team; Scott Anderson, Cornerstone’s Clinical Director; Hood and McColl and Ms. Polly and Caldwell and so many others whose legacy is inextricably tied to Cornerstone, as Young’s is.

“I’ve had lots of incredible training and people in my life who have taught me a lot over the years — and I’ve had some bosses who have taught me how to not be a boss and how not to treat people, which is just as important as the other pieces,” she says. “You treat people how you want to be treated. That’s always been my goal.”

It’s one of her guiding principles with both the staff members who work for her, and with the patients who look to her and her staff for guidance. Together, they form a recovery ecosystem that’s unique in so many ways, Young points out — from the response by Cornerstone leadership to COVID-19 to the day-to-day operations that put the recovery of those who come to Cornerstone for help first and foremost.

“It’s the heart of this place. It’s the people,” she says. “At other places, people react. I think we plan, and what they’ve done for us, the way they’ve taken care of us, through our COVID response is just one example. We’ve got grace, we’ve got personalities, and we’ve got heart.”

With that sort of wind in her sails, putting together days that add up to 35 years is … well, it isn’t easy, necessarily, but it’s so much easier, and so much more fulfilling, than the life she was living prior to Labor Day weekend, 1985.

“I want to quote my good friend, Howard (Bowlin, Cornerstone’s Spiritual Liaison): Don’t drink, don’t drug and don’t die, and time adds up,” she says. “It’s about keeping your house clean and learning how to live.”