A few months ago, Cornerstone CEO Steve McGrew asked for some thoughts on giving everyone an opportunity to know Cornerstone of Recovery a little better — specifically, the people. We pride ourselves on the fact that our most important commodity is the people — those we serve, and those we consider part of the family. With Steve’s encouragement, I offered to use this Friday motivational space once a month to introduce you to members of the Cornerstone family you may not know, or that you should know better.

You know Chris Rowe, even if you don’t know him. 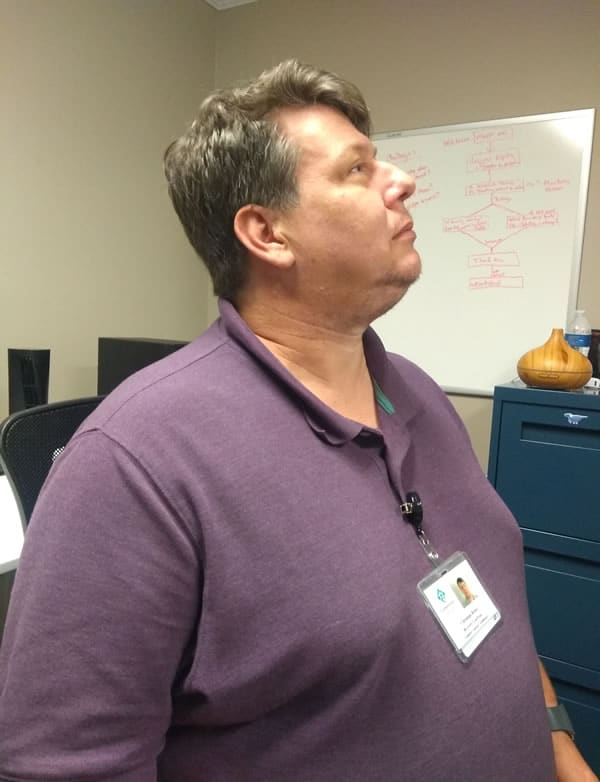 He’s often the big guy posted up at one of the tables near the coffee pot in the Polly Bales Building, and more often than not, he’s got a small crowd of Intensive Outpatient Program patients around him. His droll sense of humor is matched only by his earnestness about recovery, and it’s easy to see why he was such a success as a counselor in the Young Adult program, and why he’s a good fit in Continuous Care.

His official title is Recovery Coach and Volunteer Liaison, but that doesn’t give the full picture of what his responsibilities entail.

“I contact patients post-treatment to see how they’re doing and help with any services they need, and I encourage people to volunteer,” he says. “I set up Aftercare plans and educate them about the importance of Aftercare; I do the Railroad relapse prevention groups on Tuesdays and Thursdays; I handle alumni services; and I coordinate all of the special events, like our participation in the Haunted Cave (the annual Halloween event at Cherokee Caverns in Knoxville) and the (Cornerstone float in the downtown Knoxville) Christmas parade.”

It’s would have been hard for Chris to imagine having any responsibilities, much less ones that assist others in their recovery journey, 18 years ago. He got clean on Nov. 12, 2001, and he still recalls the moment of clarity that led him to the rooms.

“I’d just gotten out of jail, and I came home, and when I came to, my dad was standing over me,” he says. “There was a moment during all of this where he was trying to talk to me, and I looked at my dad, and I truly believed, in that moment, he wished I’d never existed. I didn’t get clean for a while after that, because he sent me back to jail that night, but that was when I knew I needed to change or kill myself.”

Chris is one of those behind-the-scenes guys who, on the surface, seems to spend more time chatting with patients and coworkers than he does in front of a computer or behind a desk, but that’s all part of the job: human interaction. Face to face connections. It’s the way he was “brought up” in Cornerstone’s culture, so to speak, when he started working here full-time 12 years ago this month.

“There’s something special about this place,” he says. “I feel cared for and loved like no other job where I’ve worked. When I first started working here, we used to take patients to the climbing center, and in my first 90 days, there was a serious accident where a patient got hurt. It’s was pretty traumatic, honestly.

“That’s how I met (Clinical Director) Scott Anderson for the first time. If I had been in their shoes, I probably would have fired me and said to heck with it, but they talked me through it and helped me and believed in me, and here I am, 13 years later.”

Over that time, he’s served as the weekend coordinator for the Young Adult and Recovery Renewal programs at the old facility, then as the weekend coordinator for all programs once Cornerstone moved to its current campus. A year and a half ago, he went to work for Julie Hamlin, director of Extended Care, and one of the highlights of his current role is interacting with the facility’s alumni.

“What I love is seeing the people who were here before me come back and talk about how (Cornerstone) happened,” he says. “There’s almost this really beautiful mysticism about Cornerstone when they talk about it, and I feel like I’m really a part of something special.”

That love goes both ways. His brother died unexpectedly a year ago — on his clean date, no less — and the pain was devastating … but it was also felt by coworkers who are also friends and, in some respects, siblings born of recovery from addiction.

“We had a service for my brother in North Carolina, where he was living at the time, and I know at least two coworkers, both of them supervisors, who came over and were there until 9:30 on a Friday not — not knowing anybody but me, but just being there,” he says. “When I was gone, my supervisor literally called me every day, asking if I needed my grass mowed or my dog walked, just all of these little things I wasn’t thinking about. Nothing was too big or too small.”

In his down time, he enjoys live music — and more importantly, taking others in recovery to their first concerts clean and sober. (Just don’t get him talking about Jason Isbell.) He put in a garden for the first time this year, and when he’s not at Cornerstone, he’s a big believer in down time:

“Doing nothing and watching TV, man,” he says. “And meetings. I like going to meetings.”

I ask five questions, with no premeditation or forethought put into what they’ll be. Chris answers in the same manner.

Q: “First CD you ever bought?” A: “Skid Row,” by Skid Row. I broke it throwing it at my brother, and I cried for a day. That’s what anger gets me.”

Q: “Movie you’ll stop and watch all the way through, any time you run across it on television?” A: “Unforgiven.”

Q: “Farthest city from East Tennessee where you’ve gone to a 12 Step meeting?” A: “Bartow, Florida.”

Q: “First thing you do when you get up in the morning?” A: “Take my pants off. There’s some people around here who will appreciate that.”