As the Railroad Program Coordinator at Cornerstone of Recovery, Jill Burbidge serves as a living example of the power of transformation. 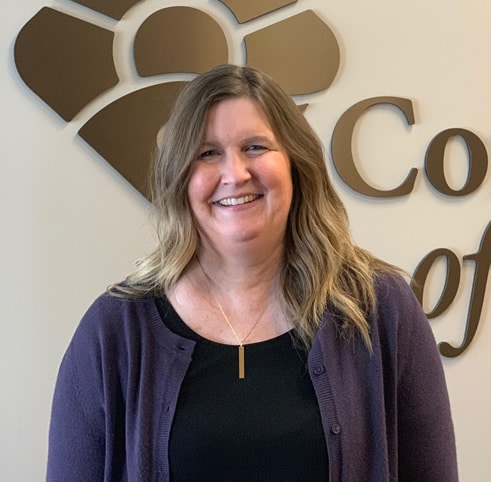 When “railroaders,” as they’re known in the industry, come to Cornerstone for residential addiction treatment, Jill acts as a liaison between the companies for which they work and the combination of therapists and clinicians that introduce them to a new way of life. She helps monitor their progress, stays in constant communication with their Employee Assistance Program coordinators and sets a living example of the power of recovery: that anyone can stop using, lose the desire to use and find a new way to live.

For men and women who live in a distinct culture where stress is often chemically assuaged, it takes a steady hand and a calming presence to assure them that such a way is possible, even after they return to their jobs.

“They have specific things they do that other people have no idea about,” she says. “They’re on call, they have a different type of work schedule that’s not a 9-to-5 job, and they really have a difficult time seeing how they can fit recovery into their life and continue to work for the railroad. That is a huge part of what we’re able to do, to show them and give them other options outside of the box so they can see that recovery is achievable.”

That desperation for a way out, compounded with the disbelief that it’s unattainable, is something Jill remembers well. As a self-described “super mom” in the Salt Lake City suburbs, she built a façade of perfection around her life. On the outside, she was the classroom volunteer who made sure her children were well-scrubbed and her house was spit-shined. As the mother of five boys, it wasn’t an easy task, and when her sister lost a child at the same time she gave birth to her fourth child, it sent her into a tailspin of addiction.

“I had incredible survivor’s guilt, and I just couldn’t cope,” she says. “I was still expected to be a mom and do all of these things, and I really started abusing medications then, along with whatever I could get. I was a huge doctor and dentist shopper, because I had the typical ‘innocent mom’ look, and I knew how to play the emergency rooms.”

When her meticulously constructed facade eventually crumbled, however, her family was adamant: It was time for her to seek inpatient treatment at a drug and alcohol treatment center. Like many of the railroaders who come to Cornerstone, she agreed, albeit reluctantly.

“I was just doing it for them to shut them up, because I didn’t think I had a problem,” she says.

An awakening and a rebirth

During her second week of treatment, however, she experienced what’s known in recovery parlance as a spiritual awakening. That was in June 2000, and from that point forward, she began to embrace a program of recovery that delivered her from the high desert of Utah to the foothills of the Great Smoky Mountains of East Tennessee. She volunteered at the treatment center where she was a patient, her attendance at Aftercare and 12 Step meetings eventually led to the expungement of her record. She went from facilitating Aftercare meetings to running the program, during which time she began working with patients from Union Pacific.

“Before that, I worked in warehousing and trucking, so I was always involved in the transportation industry, but now I was doing what I loved,” she says. “I would go to work every day, and I couldn’t believe I was getting paid to do something I loved every single day, and I still feel that.”

Downsizing and company mergers eventually led to the elimination of her position, but serendipity led her to Cornerstone. Through work in the industry, she had grown familiar with Cornerstone of Recovery’s Railroad Program, and after careful consideration, she realized that she could make a more effective difference as part of the Cornerstone family.

“I just really felt like this is where I needed to be,” she says. “I’ve always just really been impressed with the programming at Cornerstone; I feel like it’s very unique in the industry, and of all of the treatment centers I’ve gone to see over the years, there isn’t another one like this.”