Is hand sanitizer a relapse trigger or a necessary preventative measure during the ongoing coronavirus pandemic? When it comes to alcoholics and addicts new to sobriety, it can be both.

At drug and alcohol treatment centers like Cornerstone of Recovery, COVID-19 is a serious concern. As an essential business providing a service to individuals who need help for addiction and alcoholism in the middle of a pandemic, Cornerstone, like other drug and alcohol rehabs, has remained open since the outbreak of coronavirus began. And while stringent protocols have been put in place to protect patients and staff members from a potential COVID-19 outbreak, the hand sanitizer stations placed throughout the Cornerstone campus have remained alcohol free.

“We use an alcohol-free product that comes in water-based foam and contains a 1 percent concentration of benzalkonium chloride,” says Travis Pyle, the Director of Medical Services at Cornerstone of Recovery. “The reason we don’t use alcohol-based hand sanitizer is because it can be a trigger for alcoholics.” 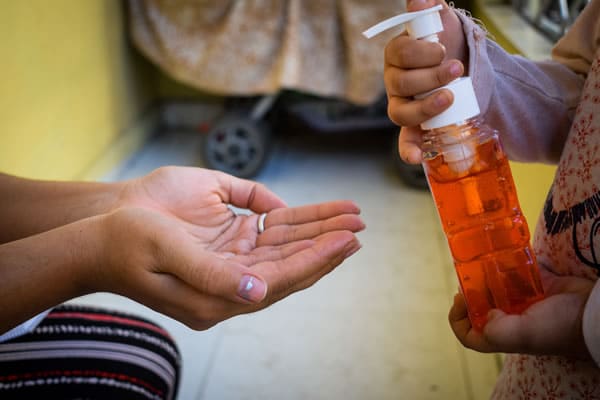 As a March Vanity Fair profile about the company Purell pointed out [1], “When we talk about hand sanitizers, we’re talking about non-water cleaners; hand sanitizers are a different branch of the cleanliness tree than soaps, which are thousands of years old and require water.”

The article goes on to detail how the first non-water/non-soap cleaning agent found to be effective was ethanol, the properties of which were uncovered in 1875 by a man named “Leonid Bucholz of what is now the University of Tartu in Estonia.” Ethanol is a grain alcohol, often included as an additive in gasoline, “fermented from many sources of starch, including corn, wheat, grain sorghum, barley, and potatoes, and from sugar crops such as sugar cane and sweet sorghum. Because there has been has been an abundant supply of corn, most of the ethanol made in the United States is from corn,” according to the University of Illinois Extension [2].

Of course, “ethanol, or ethyl alcohol, is the only type of alcohol that you can drink without seriously harming yourself, and then only if it hasn't been denatured or doesn't contain toxic impurities,” according to the educational resource ThoughtCo [3]. “The bottom line is that all ethanol is alcohol, but not all alcohols are ethanol.”

By 1911, according to the Vanity Fair piece, other researchers had determined that 70 percent ethanol made for the most effective antiseptic, and in 1936, other researchers discovered that isopropyl alcohol was more effective than that. In 1946, Goldie and Jerry Lippman established GOJO and began to market GOJO Hand Cleaner, “which is that industrial orange-smelling stuff you still see in auto repair shops and other places where people get grease on them. It is a cleaner, not a sanitizer, and based with petroleum. It’s not meant to kill germs, but to scrub off oil, grease, and other junk from the skin.” [1]

During the 1970s, however, an oil embargo caused the prices of their raw materials to skyrocket, and so they began working on “a viscous isopropyl hand sanitizer, laced with antimicrobials and other chemicals to make the product more gentle on the delicate skin of the hands.” While the information is hard to pin down, it appears, according to Vanity Fair, that alcohol gel as a sanitizing agent was conceived by a student nurse named Lupe Hernandez in 1966 in Bakersfield, California.

By 1998, GOJO had copyrighted the name “Purell,” added a thickening agent to make it less messy and began a slow roll-out to consumers. The Centers for Disease Control and Prevention (CDC) picked up on its effectiveness, and “the early 2000s was the inflection point for Purell and hand sanitizer in general; this is when it became a staple in hospitals, schools, and offices.”

Around the same time, others began to look into the possibility of alcohol-free hand sanitizers, which were often met with mixed reviews. However, for facilities like drug and alcohol treatment centers, they quickly became necessary — because alcohol-based hand sanitizer was a relapse trigger for those attempting to get sober.

Is Hand Sanitizer a Relapse Mechanism? 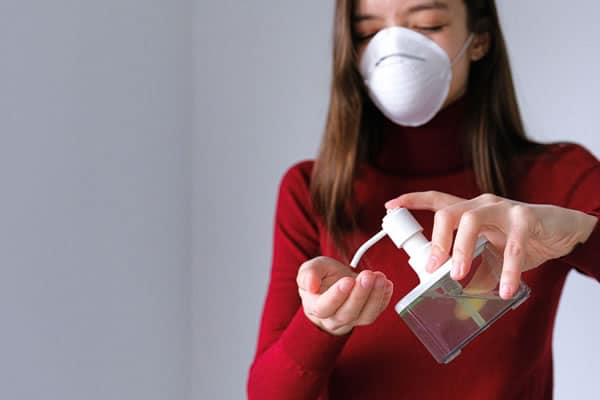 “About five or six years ago, we started noticing that we were running out of hand sanitizer too quickly, around the same time that a number of patients were getting drunk, even though they hadn’t left campus,” Pyle said. “If I remember right, we caught a couple of them filling up their coffee cups with it, and they’d drink it and get drunk — and sick.”

It’s a problem not unique to Cornerstone. In 2007, the New England Journal of Medicine detailed two cases of individuals who consumed hand sanitizer [4]: “a 49-year-old prison inmate in Maryland who got drunk one night by drinking a hand sanitizer containing ethyl alcohol,” and “a 43-year-old alcoholic in Cincinnati who was admitted to a hospital for chest pain” and witnessed drinking hand sanitizer from the bathroom dispenser. As a result, the authors of the journal piece recommended that “health care workers and administrators in hospitals and prisons ‘should be aware of this potential misuse of the products as intoxicants and should take steps to minimize such use in high-risk populations.’”

That may have been the first time health officials questioned whether hand sanitizer is a relapse trigger, but it wouldn’t be the last. In a 2016 article in The New York Times [5], reporters noted that “last year the nation’s poison control center received 19,729 reports of exposure to hand sanitizer, up from 17,821 reports in 2011,” and while most were involved accidental ingestion by children, “1,394 of last year’s incidents involved intentionally swallowing the liquid, according to the American Association of Poison Control Centers.”

For those whose familiarity with alcoholism is limited to the perception of bottles in brown bags, the idea of drinking hand sanitizer may seem ridiculous. Pyle gets it — when he first heard the recommendation that alcoholics should avoid mouthwash with alcohol, it sounded like “the lamest thing ever,” he said.

“I didn’t realize people drank mouthwash to get high,” he said. “It’s the nature of the disease. People don’t realize that it’s the little things like mouthwash, or hand sanitizer, that can be a trigger.” 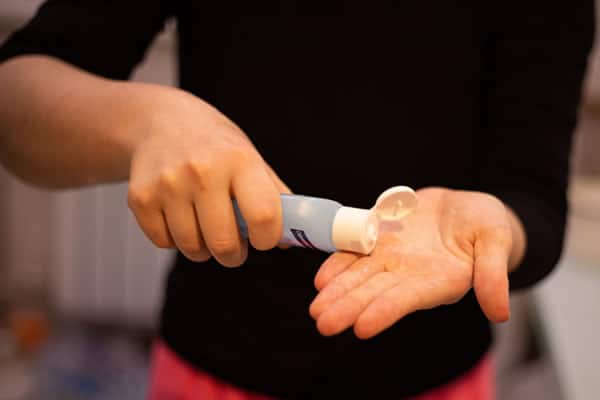 And for healthcare facilities like Cornerstone of Recovery, it can prove to be a challenge. After all, the CDC recommends that hand sanitizers “with greater than 60% ethanol or 70% isopropanol (isopropyl alcohol) in healthcare settings.” [7]

However, isopropyl alcohol is a different antiseptic altogether, and was first synthesized in 1920 by chemists with Standard Oil Company who were studying petroleum by-products [8]. In addition to hand sanitizer, “it is also used in aftershave lotions, hand lotions, and other cosmetics. In industry it is used as an inexpensive solvent for cosmetics, drugs, shellacs, and gums, as well as for denaturing ethanol (ethyl alcohol). Added to wet gas, it helps to prevent separation and freezing of a water layer. Isopropyl alcohol is easily oxidized to acetone, another important solvent.”

It’s also much harsher on the body than ethanol, according to an article for ThoughtCo [9]: “This alcohol is toxic and will damage your nervous system and internal organs if you drink it. Possible effects may include blindness, brain damage, and kidney and liver damage. These effects may be permanent. It's also possible to die from drinking this chemical.” But, the article adds, it’s also a cheap drunk for a desperate alcoholic: “Although rubbing alcohol is not good to drink, it's unlikely a person would be able to tell the effects apart from those caused by drinking grain alcohol. Drinking isopropyl alcohol initially causes intoxication, slurred speech, blurred vision, and dizziness.”

And when there’s no other alcohol around, those who are addicted to alcohol will often turn to whatever substance they can to experience the high that they crave — even if they’re in treatment for alcoholism. In fact, in 2011, the Sydney Journal of Medicine reported on a “45-year-old Australian man in treatment for alcoholism (who) was found to be dangerously drunk after ingesting six 375 milliliter bottles of hand sanitizer from his hospital bathroom. (That’s as much liquid as three wine bottles!) His blood alcohol level was 0.271 percent.” [10]

For a great many people, such behavior is unfathomable … but the inability to grasp such a raw and desperate measure only illustrates a need for a deeper understanding about the nature of addiction. Alcoholics, Pyle pointed out, like to joke that they’re “allergic” to alcohol, but there’s some anecdotal evidence that may bolster that humor … just not in the way most people think of “allergies.”

“Whether it’s the taste of mouthwash or the smell of hand sanitizer, the body detects the alcohol on a subconscious level, and it can really send somebody straight to the liquor store before they realize what’s happening,” he said.

Or, straight to a relapse via a hand sanitizer dispenser. But why? Ruben Castaneda, writing for U.S. News and World Report, puts it simply: brain chemistry. [11]

“Using drugs and alcohol releases dopamine in the reward pathway of the brain; dopamine is a neurotransmitter that helps regulate the brain’s reward and pleasure centers, as well as emotional responses,” he writes. Adds Dr. Marvin Seppala with the Hazelden Betty Ford Foundation: “This can affect alcoholics and addicts to the point their brains re-prioritize what’s most important, such as eating and survival. The drug use becomes recognized [by the brain] as more important than survival itself.

“It’s almost unfathomable that the survival instinct could be superseded by something else. Trying to understand what that looks like is hard. People will risk their lives to keep using drugs.” Combined with the effects of addiction on the prefrontal cortex of an addict or alcoholic’s brain — the part responsible for recognizing problems and figuring out solutions — and it becomes clear that individuals suffering from alcoholism and addiction make rash decisions that are in service of the substances they so crave and in total disregard to their personal health and safety.

Does that mean that every alcoholic who walks down the aisle of a grocery store and sees a shelf full of hand sanitizer will relapse? Of course not. But those individuals who are in the end stages of addiction should be aware that hand sanitizer can be a relapse trigger. More importantly, facilities that provide hand sanitizing stations in addition to treatment of any kind for addicts and alcoholics should take into consideration: Is hand sanitizer a relapse trigger for this particular patient population.

Again, the answer isn’t so simple as a yes or no. There are alternatives, such as those implemented by Cornerstone of Recovery, and when it comes to any type of germ — coronavirus or not — there’s always a more ideal solution:

“None of them are a substitution for hand washing,” Pyle said.