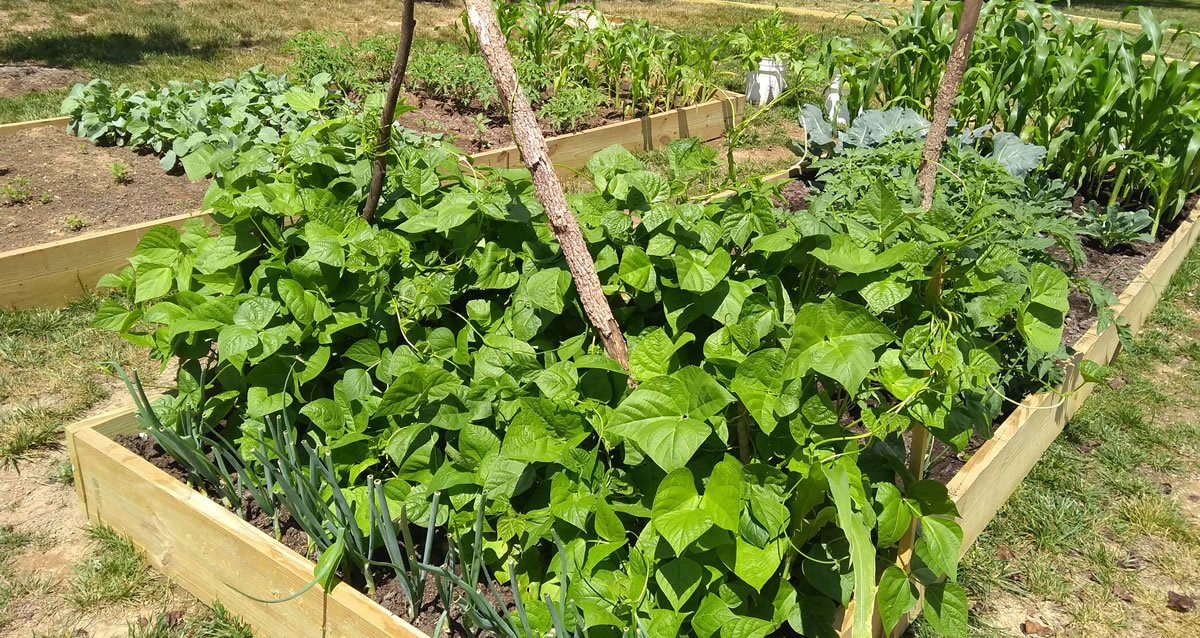 When individuals struggling with a drug and alcohol problem consider rehab, gardening therapy in addiction recovery probably isn’t high on their list of potential amenities.

Nevertheless, it’s found a way into the supplemental programming at Cornerstone of Recovery, where two raised beds adjacent to the on-campus fitness center have provided another outlet for therapy for some of the facility’s patients.

“It’s like I told an (alumni page) on Facebook — you plant seeds and watch them grow, just like you do the seeds of recovery,” says Chris Dupre, a Cornerstone alumnus who recently completed treatment and is now staying temporarily in Forth Worth, Texas, before returning home to Montana. “To be honest, I really just love to put something in the ground like that. Just to watch it grow, you realize, ‘I did that. I cultivated that. I put that in there.’ And it just brings you a lot of enjoyment.”

A therapeutic idea nurtured into a reality 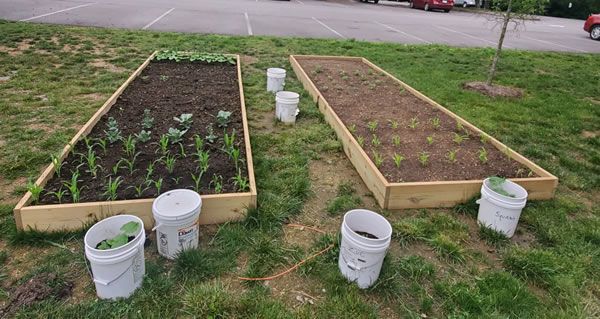 The idea of a community plot of vegetables as part of gardening therapy in addiction recovery at Cornerstone goes back several years, says Chris Rowe, a Recovery Coach and the Volunteer Coordinator for Cornerstone. Before the organization moved to its current location and contracted with the food services company Unidine to supply meals in the new dining hall, Cornerstone employed its own kitchen staff, Rowe adds.

“We talked about sustained, natural farming and growing supplemental vegetables for our own kitchen, and it was an idea we bounced back and forth, but it never really got started,” Rowe says. “Once COVID-19 hit, there was a lot of sitting around for the patients, because we couldn’t take them to outside recovery meetings or off-campus activities, so they were kind of stuck, and we wanted something to give them on campus that would utilize their time. We talked about gardening in one of our spiritual groups as an analogy for recovery, and everybody was like, ‘I have a garden at home,’ or, ‘We would love to do a garden here!’”

The idea began with patients in Cornerstone’s Intensive Outpatient Program (IOP), many of whom live as part of the organization’s Sober Living facilities (SLF). IOP serves as a transition program between residential inpatient treatment and a return home, and residents have more time to engage in supplemental and extracurricular activities like gardening, Rowe points out. The idea of an on-campus garden was taken to Cornerstone’s Leadership Team, which granted permission for space to be used on campus, and the idea slowly came to fruition.

“I’ve always done gardening. The first house I ever bought, I had a pretty good-sized garden, so I know the benefits that I get when I go out there and look at it,” Dupre says. “When we brought the idea to Chris and he helped get it organized, a lot of the guys were kind of skeptical at first, saying things like, ‘I don’t know if I have time for that,’ or, ‘I don’t know if I want to do that.’ I just said, ‘Look, what else do we have to do? There’s a pandemic going on, so it’s not like we can leave!’ So we planted the seeds in cups, and I watered them every day, and then on May 10 — my birthday — we planted the garden. It was a great present for me to be able to do that.”

The City of Maryville provided some dirt, and the Leadership Team granted a small budget request for wood for the raised beds. While the vegetables grown on the main campus — beans, corn, squash, tomatoes, watermelon, broccoli and more — will provide produce for the IOP/SLF patients who stay at Hood Hall, the campus residential tower, Rowe also helped the men staying at Cornerstone’s off-campus housing nearby put in their own garden.

“I built them a box for peppers, but then they took over and built a whole other garden, so they have their own thing,” Rowe says. “They have a kitchen to prepare their meals over there, and the guys in Hood Hall have a kitchen in their community room, so they can use these vegetables however they want.”

Gardening therapy in addiction treatment: an exercise in serenity 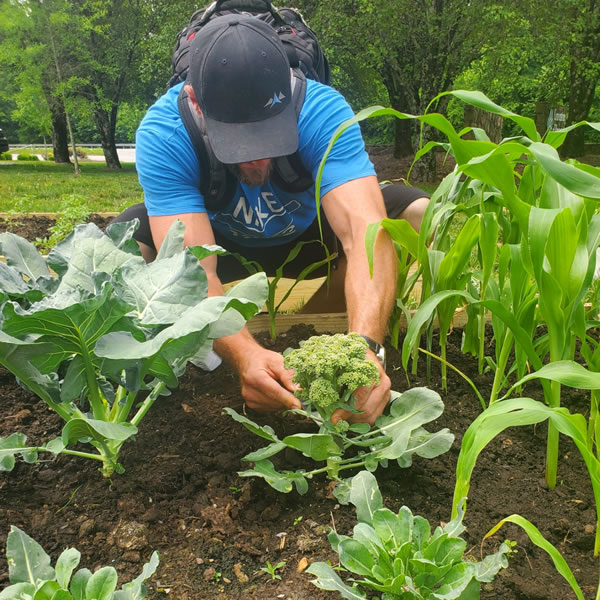 Rowe knows full well the benefits of gardening — although, he jokes, he’s more of a “sower” than a gardener.

“I’m a hands-off gardener: I put it in the ground and water it, and I’m just always amazed by how fruitful it is for the lack of work I do,” he says. “But when you eat those vegetables, it’s just an amazing feeling. You think, ‘This is the best tomato I’ve ever had in my life.’ Even if it isn’t, it feels like it is, in that moment.”

The IOP/SLF guys, however, are more hands-on gardeners. Even his more skeptical or inexperienced peers, Dupre said, quickly came around to the idea of gardening therapy in addiction recovery.

“It brought guys who normally wouldn’t do stuff like that together,” he says. “There was a guy in my group from Chicago who had no clue about gardening, but he wanted to learn all about it, and now he wants to plant a garden when he gets back. I learned so much from him, because he’s such a spiritual guy, and he learned a lot from me about gardening and how to do it. And that’s the kind of service work I want to do now as I go forward in my recovery.”

It’s late in the season for starting a garden, but once Dupre gets home to Montana, he hopes to put out some established plants in containers. It won’t be the same as getting out in the dirt and letting the rich aroma of soil and plant fill his head, but that’s OK — there are plenty of growing seasons to come, and now that he has a clean and sober future after establishing his sobriety at Cornerstone, gardening therapy in addiction recovery will be a part of his future going forward.

“I actually got to eat some broccoli before I left out of it,” he says. “I cooked a steak and made some broccoli to go with it. The guys who are still there let me know how it’s going, and even though I won’t be there to harvest it, somebody’s going to get enjoyment out of it. Someone is going to say, ‘Chris planted these tomatoes, and they’re delicious.’ And that’s the joy I get out of it.”

“I just think it gives them something to take some pride in,” Rowe adds. “The guys that really bought into it, you could see the excitement on their faces when something would come up. I think it’s just another thing to help build their esteem, and for the patients who work on it, it really does wonders for them.

“I think they go somewhere else when they garden. When you’re out there, you’re not in treatment, because it’s not something they have to do. It’s something they want to do, and they’re just tending a garden. That’s the beauty of it.” 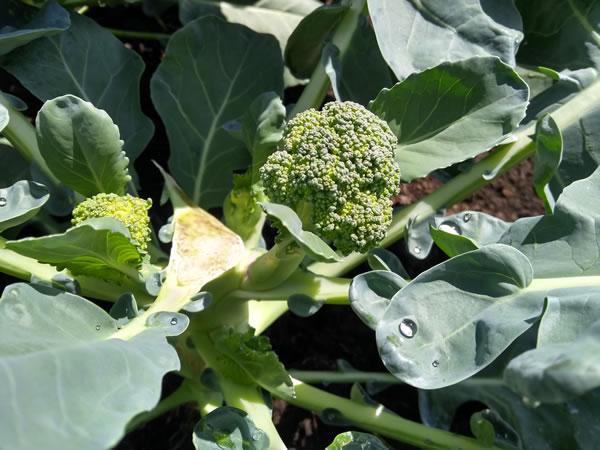 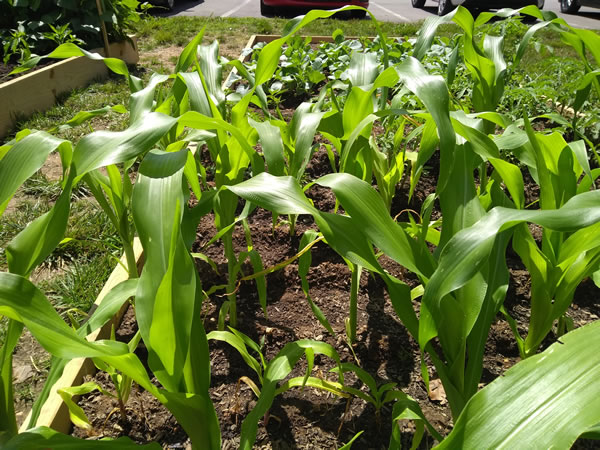 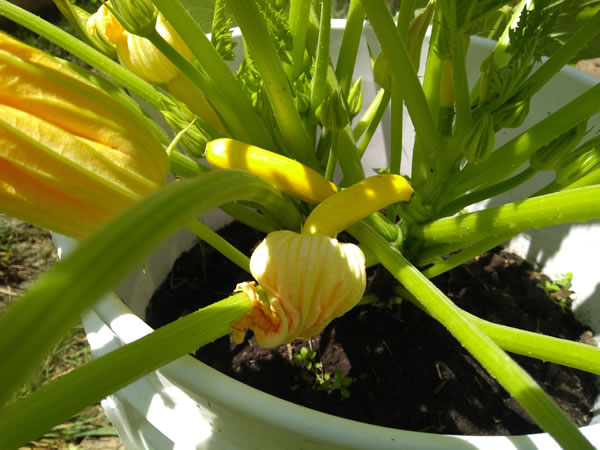