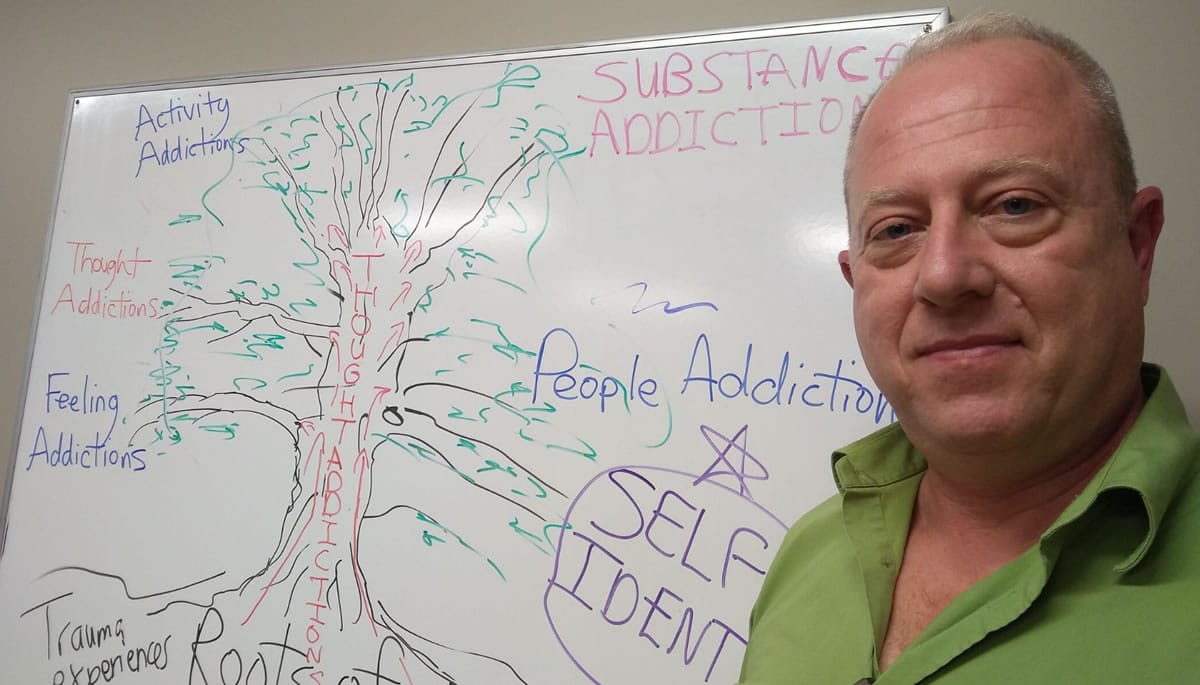 The fundamental teachings of Buddhism are known as the Four Noble Truths, and the very first is one with which Greg Meade is intimately familiar.

“The first Noble Truth,” writes Dr. Rick Hanson, “is that life contains inevitable, unavoidable suffering” — from acute distress like the diagnosis of a life-changing disease to the emotional distress of mental illness. Greg checks all those boxes … but if there’s one thing his experiences have taught him is this:

While suffering is unavoidable, misery is very much optional.

“I carried a lot of emotional pain in me, all through my life, even after I got to Cornerstone (of Recovery, the drug and alcohol treatment center where Greg works as a therapeutic assistant in the facility’s Assessment and Orientation unit) — and a lot of it was subconscious. I didn’t know why, and it probably had a lot of complexities to it,” he says. “But I’ve had my breakthrough on emotional pain in the recent past. It’s been a life journey of unspecified emotional pain without fully knowing why, but I believe that’s turned around.

“To me, all that I’ve gone through has set the framework, the way of being, to feeling the need to reach out and make things better. There was pain and suffering in my life, but it’s now become this passionate fuel to make a better world and show people that we can work together. I want to make people feel better in a healthy way. I want people to love themselves, to like themselves, to take care of themselves.

“I want people to reach that optimum,” he adds quietly, sitting in the room on Cornerstone’s Medical Detox wing where he leads classes introducing the newest, rawest patients to the opening steps of their recovery journeys. “I have a passion to make everyone and everything around me the best it can be.” 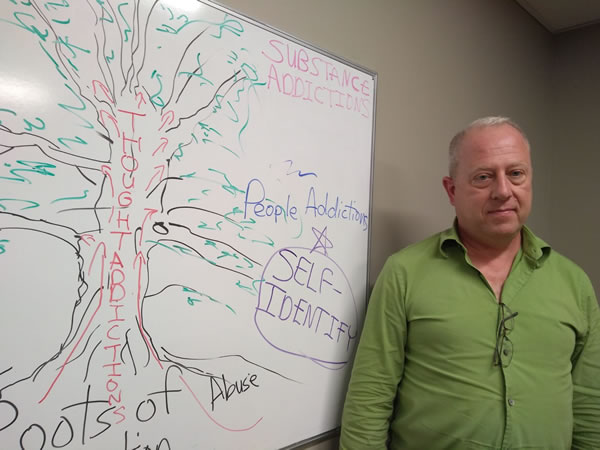 Greg grew up in the upper East Tennessee town of Kingsport, where his family owned a franchise of Munford Do-It-Yourself Stores, a hardware chain that became the family business. His older brother was a big part of the venture, and Greg remembers how his father used to wear strap-on roller skates, gliding down the aisles to re-order merchandise and making customers grin.

“I would say his biggest legacy was his humor and making everybody laugh,” Greg says.

When Greg was a child, however, his father endured several battles with brain tumors, and as Greg got older, he began to deal with his own mental and physical health problems, primarily depression, agoraphobia and social anxiety.

“It was just really deep, dark depression, and I remember one of my high school art teachers saw me struggling because I couldn’t even get a painting done,” he says.

Although the social aspects of his illness abated somewhat after he went to college at East Tennessee State University, where he pursued a degree in psychology, by the time he was 21, he developed Obsessive Compulsive Disorder that quickly became crippling.

“It was not just handwashing and rituals and counting — that was in there, but what plagued me were very, very horribly intrusive and unwanted thoughts,” he says. “It was so unbelievably severe, and I was so bad off, that it was almost to the point that I had to be institutionalized. I had to quit driving because I was afraid of hitting somebody, and it crippled my daily living with mental torment over the fear and doubt of it all.”

It forced him to withdraw from college, but around 1989, he found treatment at Woodridge Hospital in Johnson City, Tennessee, by the facility’s namesake. He signed up for a drug trial protocol as one of the first patients to receive clomipramine (brand name: Anafranil), an antidepressant with anti-obsessional properties that became a godsend. Within several months, he was free from roughly 80 percent of his OCD symptoms, and while he credits the medication for helping, that was also the planting of the spiritual seeds that would grow into the system that nurtures and sustains him today.

“The helplessness, the knowing that no human being could hold your hand or hold you and comfort you, that was when I knew I had to get some help from something way beyond human,” he says.

As his mind settled into one of its periods of relative calm, he returned to college, where he excelled in psychology, broke out of his shell and found the motivation and drive to accomplish his degree. Still, the obtrusive thought patterns of OCD would occasionally break through, and depression was often an omnipresent shadow. His love of learning and of psychology, however, made the difference, and toward the end of his college career, he joined the Presbyterian Student Fellowship, which altered the direction of his post-college journey.

The journey to Cornerstone 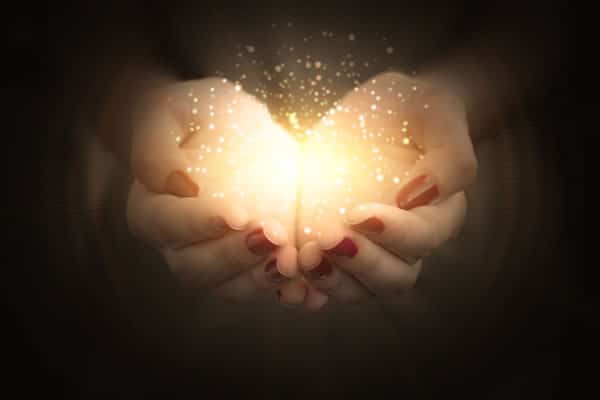 After leaving ETSU, he went to a graduate seminary nearby to pursue a master’s in divinity. Two-thirds of the way through his studies, however, his best friend, who also suffered from OCD, committed suicide, and something in Greg broke. After picking up the pieces, he went to Nashville to pursue his Licensed Professional Counselor’s certification, graduating from Trevecca Nazarene University and returning to Upper East Tennessee, where he did his practicum at the Northeast Correctional Complex in Mountain City.

Life took another hard left turn, however, as the Anafranil, which he’d been on for 10 years, lost some of its effectiveness. Behavioral health facilities in Upper East Tennessee closed left and right, leaving him unable to obtain his licensure. And in 2003, he had a literal nervous breakdown, he says.

His mental health became an ephemeral thing that was addressed through trial and error via the Mountain State Health Alliance, which over the next eight years helped Greg discover a medication regimen that would allow him to function. During that period, he also suffered severe trauma in 2007 that resulted in a diagnosis of anorexia nervosa and post-traumatic stress disorder, which only compounded his troubles.

During that time, he worked in landscaping, drew unemployment and enrolled in a vocational rehabilitation program that eventually helped him get a job as case manager for a nonprofit organization that was awarded a $1 million government grant. When that program fell through, however, and with the encouragement of his mother, he realized it was time to leave the Tri-Cities.

That was in 2016, and over the next year, with the help of a job coach through the vocational rehabilitation program, he began seeking a way to apply his education and his passion for helping others. That, he said, is when he found a job listing for Cornerstone of Recovery.

“The way it was worded, I looked at it through my skill sets, as I was taught to do in vocational rehab, and I placed myself in all of the (requirements), and it became very interesting as I scrolled,” he says. “There was a section that paid special attention to people with disabilities, and that comforted me. Compared to other places, I had not seen in them what I saw in Cornerstone.”

He called, applied, got the interview … and got the job. In February 2017, he joined the Cornerstone family, which has embraced him and been embraced by him in turn ever since. 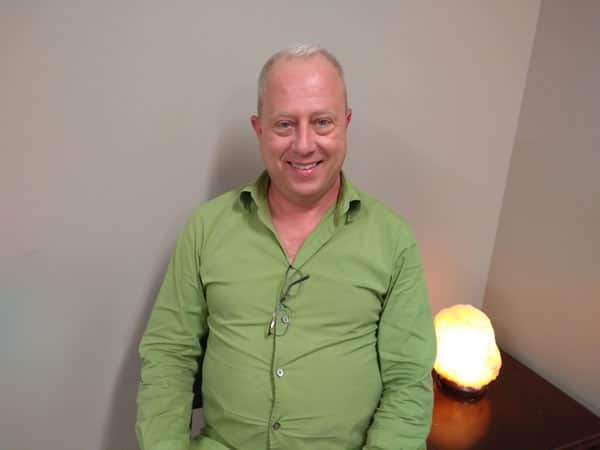 Although he never struggled with a chemical addiction, he has experienced his own battles with other addictions, he says, and he understands intimately the nature of having an incurable disease that affects the mind. His has been a lifelong ordeal, just as it is for those who seek recovery, and as a counselor who transitioned to the role of therapeutic assistant in Cornerstone’s Newcomers Program, he found his calling.

“As a spiritual group facilitator, it brought everything out: compassion, understanding, love and unconditional positive regard,” he says. “It all came out working with newcomers, and it just became so beautiful taking care of these patients, no matter what walk of life they were from. I made a commitment to steadfastly check on every patient, to learn at least their first names and always ask how they were doing, and even though I had these ways of doing and being and micromanaging, it became an incredibly effective experience.”

And it was, he said, the sunrise on the spirituality that today is his North Star. In May 2019, he transitioned to the A&O unit, where he continues to lead groups and work one-on-one with patients at various points in the beginning stages of their journeys — from intake to day three of detox to walking them over to transition into one of Cornerstone’s four residential treatment programs. He does it all with a steady kindness and a regal sort of gentility, his affect one of wisdom and tempered pain that brings out a little bit of peace in those who so desperately crave it.

“This is even deeper, because the mental, emotional, spiritual and physical spots the patients are in are all different,” he says. “I brought what I had to offer over here, and it’s been really, really rewarding. I get to see a lot of gifts.”

And he does so with the stoic endurance of a man who continues to understand that, as that First Noble Truth teaches, life is indeed a journey of suffering: Last year, inexplicable joint pain led to a moment of panic at home, when he tried to stand up ... and couldn’t. His physician ran a number of tests, and Greg feared a diagnosis of multiple sclerosis. After several days in the hospital slightly less than a year ago, doctors delivered the grim news: acute Myasthenia gravis, exacerbated. It’s an autoimmune disease in which a breakdown in communication between nerves and muscles causes weakness and rapid fatigue of muscles under voluntary control.

“Intuitively, when all this was developing throughout that summer, I felt that there was something really bad coming,” he says. “I wasn’t negatively minded, but I knew it was something. However, I choose to look at it as part of my spiritual journey. I wasn’t going to let it defeat me.”

Today, he walks with a cane on some days, and there are nights when, at the end of a long shift, it’s all he can do to get his muscles to cooperate enough to get home and in bed. However, he does it all with the beatific smile of one who is privy to a higher spiritual truth: that while he has and will continue to suffer, he chooses not to be miserable.

“Cornerstone was the ultimate putting-together of all the pieces of my coping mechanisms, going back to that spiritual experience of having OCD so severe that I knew no human being could take those afflictions away from me,” he said. “Over that time, I have persevered spiritually. I’ve had several therapists who have helped me along the way, and I’ve been in support groups since I was 21, along with individual therapy, but I’ve always expressed my feelings and emotions. I’ve always tried to be good at active listening.

“And I love what I do. Love — that, to me, is the greatest recovery tool, and Cornerstone is a special place to receive and give that. I try to exercise that wherever I go, that and spiritual principles: humility, compassion and empathy. Every day, those spiritual principles are a part of me, and that’s become my fuel.”