Drug and alcohol use among college students is a topic that’s often treated, in many circles, with kid gloves.

Consider, for instance, the vast repository of Hollywood films made about the party culture in higher education, from “Horse Feathers” to “Animal House” to “Revenge of the Nerds” to “Van Wilder.” Popular culture often depicts college life as a rite of passage, in which getting wasted is not only expected, but encouraged.

A lot of times, parents themselves buy into the idea — after all, they partied in college, so shouldn’t it be natural for their children to do the same? And let’s be real: drug and alcohol use among college students doesn’t mean every undergraduate who imbibes or smokes (or even does worse) is throwing away his or her future. Most of them, even if they manage to snatch a degree from the jaws of failure because of the extent of their partying, transition to adulthood and the responsibilities of life after college without developing a drug and alcohol problem.

But … what about those who don’t? What about the ones for whom drugs and alcohol trip the biological markers in the brain that switch on addiction? Maybe they don’t meet the qualifications for being an addict or an alcoholic right away, but what if they’re unable to “turn off” those switches after graduation?

It’s a conversation worth having, and to do so, an examination of statistics regarding drug and alcohol use among college students is a good idea.

Drug and Alcohol Use Among College Students: The NSDUH

One of the most comprehensive collection of statistics regarding drug and alcohol use among college students — and all populations, really — is the National Survey on Drug Use and Health. Directed by the U.S. Substance Abuse and Mental Health Services Administration, the NSDUH [1] “provides up-to-date information on tobacco, alcohol, and drug use, mental health and other health-related issues in the United States.” First conducted in 1971, it’s an annual survey of individuals in all 50 states and the District of Columbia, and for the most recent study, “almost 70,000 people will be interviewed,” according to the website, and their information “is used to support prevention and treatment programs, monitor substance use trends, estimate the need for treatment and inform public health policy.”

The most recent completed survey was conducted in 2019 (the 2020 results are still being tabulated), and to put into perspective how prevalent drug and alcohol use among college students actually is, let’s start with a baseline: The number of young adults that include college-age students living in the United States in 2019. According to statistics from the Kaiser Family Foundation [2], there were 27,799,100 young adults ages 19-25 in 2019, making up 8.7% of the population.

Those statistics are notable, of course, but as the survey points out, many of them remain unchanged from previous years, and some of them actually declined from the year prior. For the purposes of determining problematic drug and alcohol use among college students, however, let’s look at other key numbers.

To understand how alcohol consumption is considered problematic, know this: “alcoholic” and “alcoholism” are colloquial terms. For the purposes of science and medicine, it’s known as “alcohol use disorder,” or AUD, which is defined by the National Institute on Alcohol Abuse and Alcoholism (NIAAA) [4] as “a medical condition characterized by an impaired ability to stop or control alcohol use despite adverse social, occupational, or health consequences.” It’s a disorder of the brain caused by adverse effects of repeated or heavy alcohol consumption, and depending on the signs of diagnosis, it can be classified as mild, moderate or severe.

So what does the NSDUH tell us about AUD and young adults? It’s not encouraging: 9.3%, or 3.1 million, young adults qualified for an AUD diagnosis in 2019. On top of that, the NIAAA is a smorgasbord of additional grim news [5] when it comes to drug and alcohol use among college students. For instance:

But that’s not all, the NIAAA adds: “Other consequences include suicide attempts, health problems, injuries, unsafe sexual behavior, and driving under the influence of alcohol, as well as vandalism, damage, and involvement with the police.” 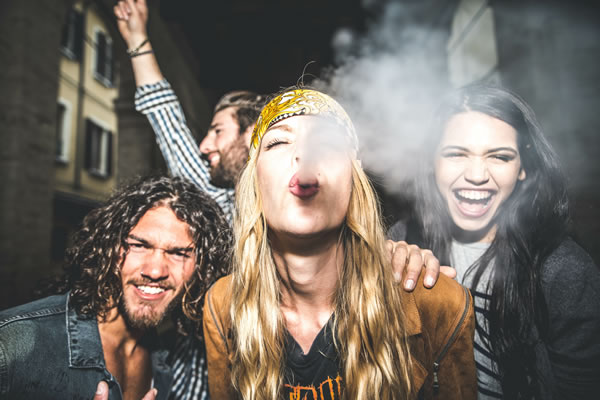 While institutions of higher learning are often thought of (sometimes fondly so) as Bacchanalian hotbeds of boozy celebration, the students who attend those hallowed halls aren’t averse to experimenting with other mind- and mood-altering chemicals. Like alcoholism, “addiction” is a laymen’s term, with illicit drug disorder considered the proper scientific and medical diagnosis. The NSDUH takes it a step further and breaks those disorders down by specific drugs, stating that each meets the criteria for dependence or abuse. The survey results are rather eye-opening:

It should be noted that the scientific and medical terminology for an overall problem with alcohol and drugs is labeled, at least in NSDUH terms, as a substance use disorder, or SUD. The number of young adults ages 18-25 who met the criteria for an SUD diagnosis in 2019: 14.1% of that population, or 4.8 million.

It’s important to point out that the NSDUH isn’t the only study that examines drug trends among college age young people. The Monitoring the Future (MTF) national survey conducted by the National Institute of Health [6] tracks “substance use in college-age adults ages 19 to 22, including patterns of marijuana and alcohol use, nicotine use, and nonmedical use of prescription drugs,” and some of the most recently released data is revealing:

Drug and Alcohol Use Among College Students: Can it Really Become a Problem? 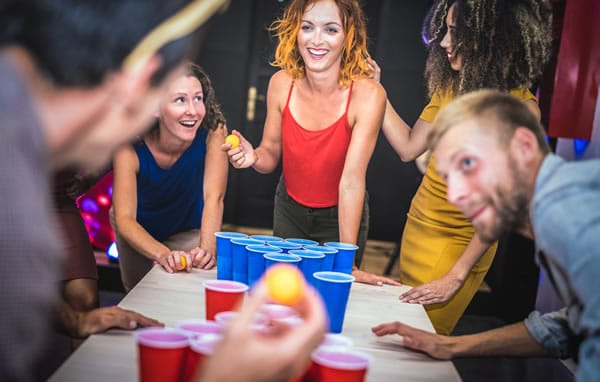 Consider this: At no time has any college student or prospective college student approached an experiment with drugs or alcohol for the first time and thought, “Man, I sure hope I become a junkie!” Or, “I can’t wait to flush all this tuition money down the toilet because I can’t stop drinking!” No one, especially young adults themselves, expects drug and alcohol use among college students to lead to a substance use disorder.

Even those individuals who become part of the NSDUH data set never intended to do so … but as a recent National Institute of Health analysis demonstrates, it’s always a possibility: “30% of young adults develop a heroin use disorder and 25% develop a methamphetamine use disorder a year after first using heroin or methamphetamine,” the NIH reported in March [9], summarizing a recent study in the Journal of the American Medical Association Pediatrics.

It’s important to distinguish, however, the development of an SUD from the narrative that one hit or one drink or one pill can ruin a life. As Matilda Whitworth points out, writing in 2015 for the online publication Vice [10], “to be diagnosed as addicted you need physical symptoms of tolerance (you require more of the substance to achieve the desired effect) and withdrawal, alongside impaired control, social impairment, and risky behavior. No drug will achieve this combination after just one hit.”

However, she goes on to add: “Some research suggests that while a single hit might not make you an addict straight away, it may ‘prime’ the brain for addiction.” Whitworth then cites a 2001 study published in the journal Nature, in which the report’s chief author, Dr. Antonello Bonci from the University of California San Francisco, pointed out that “a single exposure to cocaine triggers changes in the part of the brain central to the development of addiction … (that) lasted a week to ten days, suggesting the first drug exposure may ‘throw open a window of vulnerability’ during which the brain is acutely responsive to any further hits.”

Bonci, of course, was quick to point out that a bump or a hit off a crack pipe wasn’t enough to turn anyone into a raving lunatic for cocaine. But: The study suggests that among certain individuals, a combination of genetic, psychiatric and environmental factors may create a brain chemistry that’s a perfect ground zero for the impact of a substance like cocaine. After all, as the NIDA points out [11], “the initial decision to take drugs is voluntary for most people, but repeated drug use can lead to brain changes that challenge an addicted person’s self-control and interfere with their ability to resist intense urges to take drugs.”

Drug and Alcohol Use Among College Students: What Do We Do?

Clearly, the issue of drug and alcohol use among college students is one worthy of awareness and conversation, if not outright concern. The data demonstrates that there is indeed a problem, and even if the number of those college students who develop an SUD is less than the percentage of those who experiment, stop and go on to successful lives and careers, it’s important to take stock of what’s being done to help those who can’t.

While drug and alcohol use among college students can’t be legislated or moralized out of existence, it can be discussed under the umbrella of helping those students who struggle understand what they’re up against. More importantly it’s imperative to encourage parents, educators and young people themselves that the potential for alcoholism and addiction shouldn’t be dismissed out of hand as the folly of youth or a rite of passage.