The final six months of 1979 were some of the darkest of Howard Bowlin’s life.

Today, the spiritual advisor, military veteran and retired Episcopal priest recalls them with the stoicism of a man who’s spent 40 years working a one-day-at-a-time program of acceptance and change. At Cornerstone of Recovery, the drug and alcohol treatment center where he works, he exudes a Zen-like measure of placidity as he counsels patients who struggle with weighty spiritual concepts. Sitting in his cozy office, chin in his hand as he stares intently at those who unburden themselves to him, he strikes a reassuring tone that lands somewhere between Mr. Miyagi from the “Karate Kid” films and Jed Bartlet from “The West Wing.”

In those moments, it’s almost impossible to picture the man he was at 33, driving down a dark suburban Maryland backroad, half-crazed with grief and barely one step ahead of the full-throated alcoholic insanity that threatened to consume him.

Bowlin remembers it well, however. In August of ’79, he and his wife experienced a life-altering tragedy that played out until the end of the year, and by Jan. 22, 1980 — the day he got clean and sober for good — the booze had stopped working.

“I had gotten to the point where I could not drink enough to make the pain and the crazy go away,” Bowlin recalls. “No matter how much I drank, it was like it didn’t do anything. It’s really difficult to describe to or for anyone who has not had a catastrophe in their life, because it was just so insane. I was feeling absolutely hopeless, and I couldn’t see a way out.”

Howard Bowlin and the agony of self-obsession 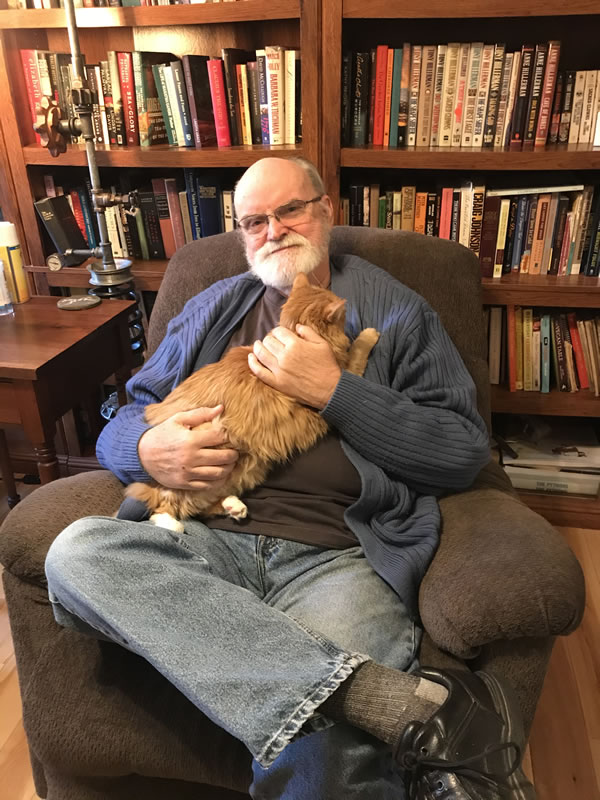 Howard Bowlin and his cat, Rufus.

At the time, Bowlin and his wife, Gail, were both active-duty military personnel. Bowlin enlisted in 1966 and would eventually rise to the rank of master gunnery sergeant; during the Vietnam War, he was assigned the detail of burying servicemembers killed in action. Alcohol was a steady companion, but when it ceased to assuage his grief and rage, he faced a monumental decision on that cold January day.

“I remember it was around dinner time — we had just finished dinner — and I said to Gail, ‘I can’t drink anymore,’” he says. “And she said, ‘Well, just put the cork back in the bottle, and it’ll still be there tomorrow.’ And I said, ‘I don’t mean tonight. I can’t drink anymore.’ There was a history of addiction in my wife’s family — she had a couple of uncles who were alcoholics, and one of them died of it — and so she said, ‘Why don’t you call (a 12 Step program)?’”

His first reaction was like that of many alcoholics and addicts when confronted with the magnitude of their problems: “Oh, I’m not that bad.” Sure, he had a problem, but together, they could work through it. A self-help group? Surely he could get on top of it without that.

Except … that small, quiet voice in the back of his head insisted otherwise. About 30 minutes later, he remembers, he confessed to what he knew to be true: “I’ve got to ask for help. I can’t do this, because I’ve tried it a gazillion times.”

At the time, the couple was living in a suburb of Washington, D.C. He called the area hotline of the flagship 12 Step program in the area; the man on the other end of the phone was friendly enough, and when Bowlin told him where he lived, he directed him to the nearest meeting taking place that night at a Baptist church in Hughesville, Maryland.

“When I heard that, my heart sank, because that’s another part of my story,” Bowlin says. “I had grown up in the Baptist church, and there was a lot of emotional and physical abuse there, and I made a vow that if I ever made it out of there, I would never go back in one. So I almost didn’t go because of that issue. It was some measure of my desperation that I went anyway.”

When he did, he adds, his life began to change. It started out with a simple greeting that let him know his fears of religious underpinnings to 12 Step recovery were misplaced: Although he entered the church building with a measure of trepidation, his first interaction set him at ease.

“I asked, ‘Is this a Baptist thing?,’ and the guy who met me at the door looked at me like I was crazy until I pointed at the building,” Bowlin says. “He told me, ‘Oh, no! We’re spiritual, not religious. We just rent a room here. We’ve got nothing to do with this church.’ So I figured, OK, I’ll give it a try.”

That first recovery meeting gave Bowlin three gifts that he still treasures today. He’s been to thousands of meetings in the years since, in every state in the Lower 48 and even a French-speaking one in Quebec, Canada, but that first one … that was the one in which the doorway to an entirely new way of life opened up. When assembled together, he adds, those three gifts amounted to the simplest of things that sustains him all these years later: hope.

“The first gift was honesty, because he said to me, ‘You don’t have to drink again if you don’t want to.’ I thought he was insane when he told me that — the reason I went there was because I couldn’t stop drinking! — but as it turns out for me, it was 100 percent correct, so he gave me the truth,” Bowlin says. “The second thing he gave me was the idea that I’m not unique. There are things about me that are, but overall, I’m not. We had that whole exchange where I said, ‘You don’t understand; I’m different.’ But he said, ‘Howard, if there’s any group of people on this planet that do understand, it’s the people in this room. If you start a sentence, we can finish it for you.’ And what I found out in that meeting, as I started listening to people, was that that was true.

“And the third gift was the laughter. There was a man and his wife leading the meeting — Jim and June; he was an alcoholic, she was not, but it was an open meeting (meaning non-alcoholics could attend), and they lead it. And they told a story about how, when Jim was drinking, he hid vodka bottles all over the house, including in the linen closet at the top of the stairs.”

The story goes, Bowlin continues, that the couple would watch TV downstairs, and every so often, Jim would come up with an excuse to go upstairs and sneak a swig from his hidden bottle. June couldn’t figure out why — she knew he drank but thought she had discovered all of his hiding places. She found the bottle in the linen closet, however, and replaced the booze with white vinegar. The next night, they went through their usual routine, and as her husband snuck up for one of his surreptitious swigs, June heard a scream from the top of the stairs. Jim, it turned out, had taken a large guzzle of vinegar.

“Everybody in the meeting was laughing, and I’m sitting there thinking, ‘These fools think this is funny,’” Bowlin says. “I wasn’t seeing the humor at the time, but that was my introduction to the fact that we do learn to laugh at the tragic things that happen in our lives. Those are the three things I remember from that meeting, and out of that, I got the hope that this could work for me, and that I wanted to continue.

“They told me when the meeting was over that there would be another meeting there the next night at the same time, and that they hope to see me again. I went back and I’ve been going back ever since.”

The willingness to keep coming back

In that time, his sobriety has deepened, and doors have opened up in his life that have transformed him into a different man than he was on that long-ago January day. In the early 1990s, he entered the priesthood following his retirement from the military, and today he draws on his spiritual and sober experiences to offer sustenance and succor to individuals who seek the same relief he once did.

Along the way, he’s experienced some amazing sobriety milestones: Attending the 75th international convention for his preferred 12 Step program, during which a representative of roughly 75 countries came out on stage during a flag recognition ceremony, demonstrating that the program that transformed his own life is working to do so around the world. He also vividly recalls how a trip to Orange County, California, when he had been sober for 10 months allowed him the opportunity to attend a meeting at which Clancy I., a noted figure in recovery circles who recently died with 62 years of sobriety.

In the years since, he’s found it, and every Jan. 22, he pauses to give thanks for sobriety’s gifts — to be anywhere he chooses to be, and comfortable in his own skin while being there. It’s a far cry from the lonely, afraid alcoholic he was that night, sitting outside that Baptist church, desperate enough to venture forth into an as-then unknown future that could not be, he realized then, any worse than the misery that was his constant companion.

There was another newcomer at that first meeting that Bowlin remembers, a fellow alcoholic who sat there for the first time, like him. Unlike him, he didn’t come back the next night, and over the next eight years that Bowlin went to meetings in the D.C. area, he never saw the man again. He’s thought long and hard over the past four decades about why he summoned the willingness to embrace a new way of life on the first try; he’s not unique, by any means, but in hindsight, he adds, it comes down to a simple concept that he’s come to understand more keenly through sobriety and spirituality:

“I’ve known many other people in recovery over the years who did make it on the first try also, but if I had gone to a different meeting that night, or met with a different group of people, would I have had the same experience and the same outcome? There’s no way to know, and playing what-if games quite often doesn’t lead anywhere,” he says. “I am convinced I was at the right place at the right time with the right group of people with where I was in my life that night. It all came together, and I am very grateful for that.”