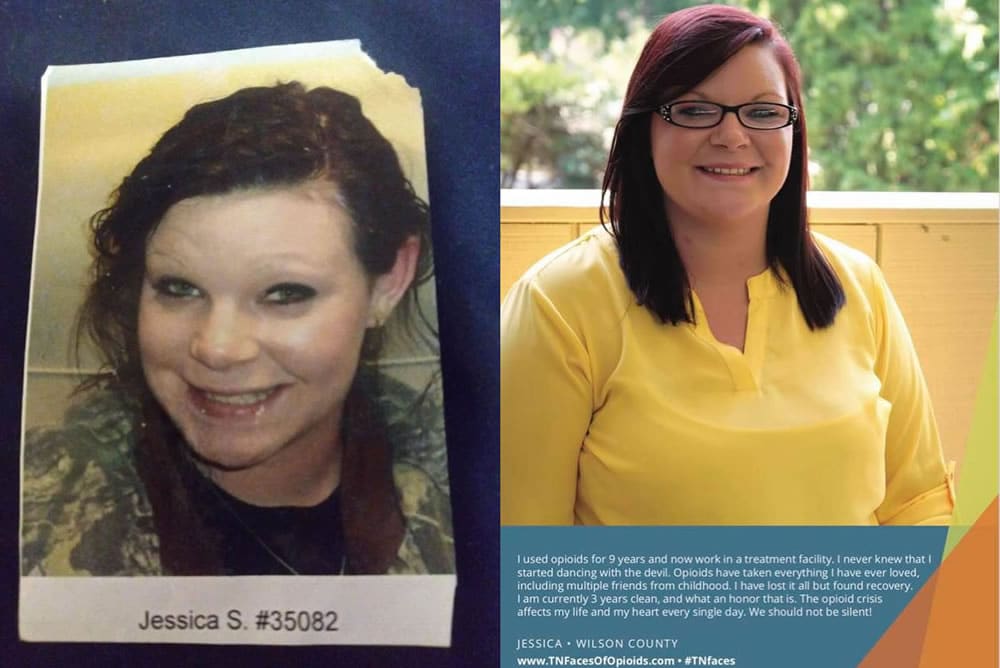 Jessica Stanley — her admission photo to Buffalo Valley in 2016, and today as one of the Tennessee Faces of Opioids.

The bitter ends of addiction are a familiar refrain for anyone who sits in a 12 Step meeting: Jails, institutions and death.

Jessica Stanley, a therapeutic assistant in Cornerstone of Recovery’s Newcomer’s Program, had checked off the first two. And when she resigned herself to that final fate of the third, she knew she had to do something different.

“It was horrible. It was just jails and institutions for me, repeatedly, and it was miserable,” Stanley says. “I had overdosed three times, and I knew I was going to die. And it was scary when I accepted that.”

Today, Stanley has three years clean. She’s a valuable member of the Cornerstone family, is an involved mother and partner and is an active member of the East Tennessee recovery community. Now, she’s also one of the “Face of Opioids,” a new initiative by the Tennessee Department of Health that’s designed to shine a light on the ongoing addiction epidemic by putting the names and faces of real people in the public eye instead of just a sheet of statistics. 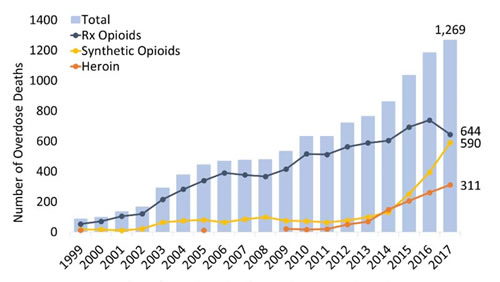 Courtesy of the National Institute on Drug Abuse

“We launched this website (www.tnfacesofopioids.com) on July 16, and all of the stories we’re hearing are from people who have been impacted by the opioid crisis — faith leaders, people in recovery, law enforcement and parents of people in recovery or who have passed on,” says Elizabeth Hart, the associate director of the Office of Communication and Media Relations for the Tennessee Department of Health. “It’s open to anyone from all walks of life, no matter their background, because the idea is really to reduce the stigma of opioids and show that there real people in this state who have been impacted by the crisis. There are real people behind those numbers.”

The effort is built off of funding provided by a grant from the Centers for Disease Control and Prevention. In examining the numbers, the members of the communication office examined the latest overdose statistics — 1,269 deaths in Tennessee in 2017 alone, part of roughly 72,000 nationwide — and decided to showcase the humanity behind those numbers. The goal, Hart said, is to establish a representative from each of Tennessee’s 95 counties, but that’s just the tip of the iceberg: The website invites anyone with a passionate connection to addiction or recovery to upload their own story and photo and become a part of the campaign.

“We’re not telling their stories; they’re telling their own stories,” Hart says. “I will look it over for grammar and spelling errors, but for the most part, even the tone in which they write, that’s them. I don’t edit at all. It’s the way they speak, so it’s their story.”

The most rewarding part of the campaign for Hart personally has been her ongoing travels across the state, from Memphis to Mountain City and all points in between, to gather the stories of the official representatives of each county. One their stories are collected, her office prepares social media graphics and posters to provide the subjects a way of sharing their experiences.

“Providing those materials, that’s part of this campaign,” she says. “We want to keep this going. And there will be other people who want to share their stories — the more, the merrier. I’m only doing the first round of taking photos, but after I’ve already been to that county, folks can upload their story to the website, and we’ll send everything over to the graphic artist.”

A beacon of hope 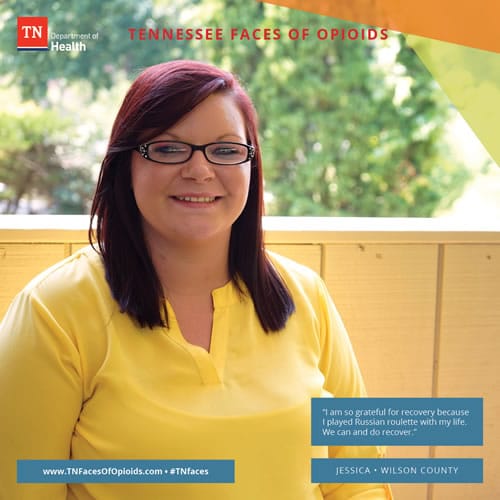 Although she now lives in East Tennessee, Stanley is the official “story” of Wilson County, a suburb of Nashville that includes the towns of Mt. Juliet and Lebanon. After going to treatment three years ago at Buffalo Valley, Stanley’s decisions in her addiction had strained relationships with her family. Her mother told her she wasn’t allowed back home, so she came to East Tennessee to stay at the Oxford House, a sober living facility.

It was difficult at first, she says.

“I thought a lot of people didn’t relate to me, and I didn’t know anybody,” she says. “I had been wanting to leave one day to go back home, but all the girls at the halfway house said, ‘Just go to this meeting.’ And while I was there, I heard a young man who was just like me, celebrating a year clean, and he literally told my exact story. It was like something went off, and that’s when I knew: Maybe people really have been through what I went through.”

And that’s the entire goal of Tennessee Faces of Opioids: Each individual has a different story to tell, but the impact of addiction rarely deviates, according to Hart.

“I’ve met folks who have been to prison; people who have contemplated or even attempted suicide but were not successful; folks that have done things you only hear and see about on television,” Hart says. “We want people to understand what the crisis looks like. I tell a lot of people that there are no stories just alike, but there are similarities and common denominators.

“It’s a unique project, and we want to keep pushing. I’d love to get 50 stories per county! That’s really the goal — to keep these stories coming, so people can see other people in their own communities, because that’s where it’s going to have the most impact.”

And in the case of individuals like Stanley, that impact has a ripple effect. She may be the Wilson County Face of Opioids, but now living in East Tennessee, she demonstrates a passion for recovery in every aspect of her life. In the community, she’s involved in projects like last weekend’s International Overdose Awareness Day; On the job, she can point to her rehab intake photo and tell the clients at the beginning of their own recovery journey that they, too, can do more than survive. They can thrive, and carry forward the message that was so freely given to her:

That an addict, any addict, can stop using, lose the desire to use, and find a new way to live.

“I want them to know that it’s OK to be honest,” she says. “I want everyone to understand that together, we can recover.”