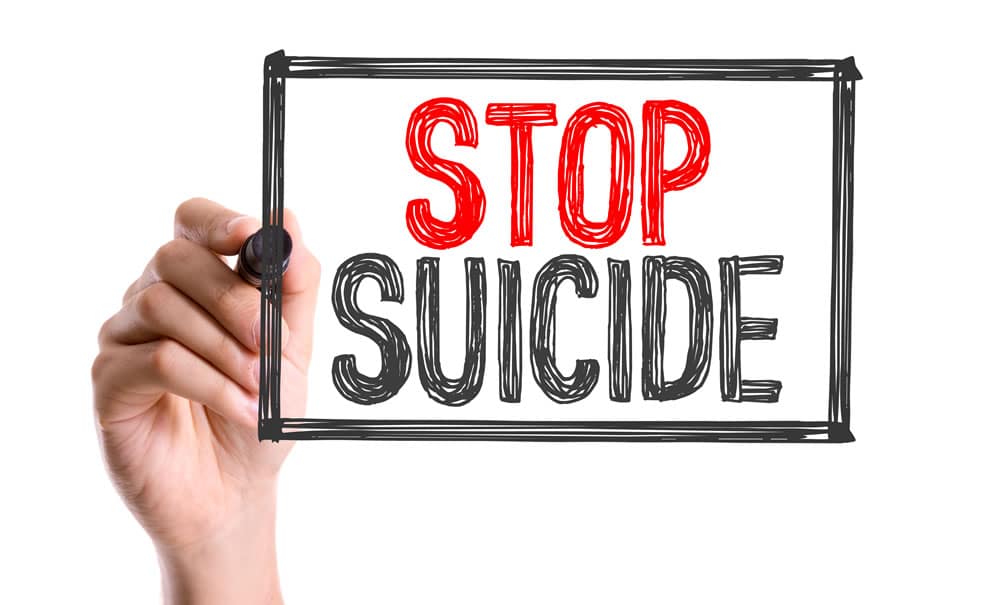 It’s a correlation long recognized by professionals in the suicide prevention and addiction treatment fields, but now there’s indisputable data: In 2017, deaths due to drugs, alcohol and suicide spiked to their highest levels ever recorded.

The Centers for Disease Control and Prevention has collected that data since 1999, but two public health nonprofit organizations — the Trust for America’s Health and the Well Being Trust — released an analysis of that data this week that show “the national rate for deaths from alcohol, drugs and suicide rose from 43.9 to 46.6 deaths per 100,000 people in 2017, a 6 percent increase,” according to a story published on the front page of Tuesday’s edition of USA Today.

In fact, according to the numbers, death from suicides increased by 4 percent, double the national average annual pace over the previous decade, according to the story. For Amy Dolinky, East Tennessee Director of the Tennessee Suicide Prevention Network, those numbers are sobering but not particularly surprising, she said.

“Suicide is the leading cause of death for people with substance use disorders if you look at the disease model,” Dolinky said. “For these people, the problem is life, and the solution is drugs and alcohol. When you remove those, you still have those problems of life, and it seems that suicide could be an easy next option for some folks. Whether that person is in recovery, or the drugs and alcohol are not working like they used to, it just seems like a progression that’s bound to happen.”

A helping hand from the state 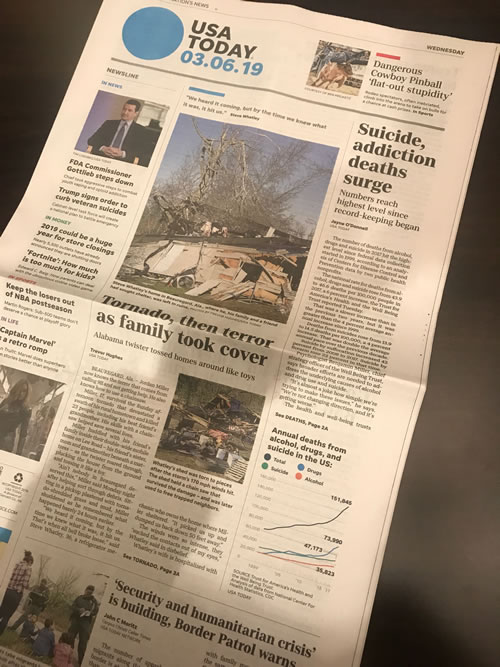 More and more government officials are recognizing that progression, and Gov. Bill Lee, inaugurated last January, pledged last month to do something about it. According to a February press release from his office, “To address this issue, Gov. Lee is proposing a $1.1 million investment that will expand the state’s partnership with the Tennessee Suicide Prevention Network (TSPN) to establish a new regional outreach model and increase the Department of Mental Health and Substance Abuse Services’ efforts to focus on interventions at the community level using evidence-based practices.”

For TSPN, that’s a desperately needed $625,000 windfall, Dolinky said. (The remaining $500,000 will go to the state Department of Mental Health and Substance Abuse Services.) It’s also a signal that the alarm over rising suicide rates has reached the highest levels of state government.

“It’s the first time we’ve seen anything like this, and I think it sends not just a clear message to us in the field that we’re not only going to be able to do more, but that we have leadership that really wants to take these issues seriously, and people who don’t just say that, but support that,” she said.

The most immediate need, she added, is additional staffing, so that TSPN can establish regional directors in all areas of the state that can work autonomously to identify and address the needs of specific communities. They’ll certainly have their work cut out for them: Despite the growing alarm over rising suicide rates, Dolinky and others in the prevention field still face down public stigma against both suicide and addiction. Because of that stigma, many of the 338,000 Tennesseans who think about suicide at least once a year — roughly 5 percent of the state’s population, according to Dolinky — never seek help for those thoughts.

“I think the perception is definitely growing that suicide is preventable and that there are more things we can as a community to prevent it,” she said. “I think we see this a lot on TV, with famous people trying to do mental health campaigns, or in schools, where a lot of kids are affected and starting programs that promote kindness. I think we're seeing more upstream prevention — but it’s usually upstream prevention that occurs as a result of a loss.” 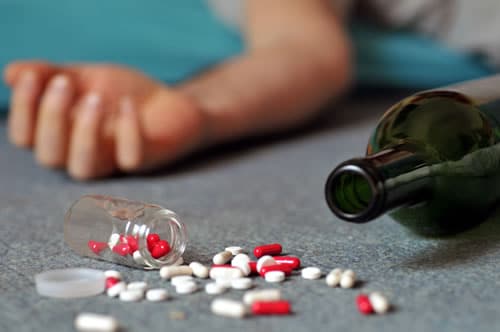 Perhaps the most difficult task is answering the question of “why?” when it comes to suicide. The reasons are many and varied, and for those who lose a loved one to suicide, no amount of explanation will assuage grief. For others, however, it can best be attributed to one thing, Dolinky said.

“In suicide prevention, what’s the big thing they talk about those people feeling? Hopelessness,” she said. “I usually try to give a simple explanation of tunnel vision, that for those who consider suicide, it doesn’t matter what’s outside of that feeling. Once they’re headed in that direction, the only things they feel are pain and loss, and everything else is totally out of the picture.

“That’s one reason addiction and suicide are so very intertwined, because the risk factors are just about the same, and it’s why we see those intersections be so much more concrete than in other places.”

To address the Scylla and Charybdis of addiction and suicide, Dolinky feels her that mental health providers need to work more closely with organizations like TSPN, and she holds up Cornerstone of Recovery as an example. Cornerstone is one of the premier agencies in the state’s Zero Suicide Initiative, which combines the efforts of a state task force, the Tennessee Department of Mental Health and Substance Abuse Services, TSPN and the Suicide Prevention Resource Center to eliminate suicides among the client bases of behavioral health and substance abuse treatment organizations in Tennessee.

“Cornerstone really went out of its way to take action and to stay engaged, to make sure all new staff is trained in suicide prevention, and that’s the way we would love to see all agencies, specifically drug and alcohol treatment centers, do it,” she said. “We see a lot of opportunity with the governor’s new initiative. Obviously, that’s one grant, and we can’t get to every agency in the state, because not everybody is the right fit, or they might have another focus. But Cornerstone working with us is the prime example of what we would love to see everyone else work toward.”