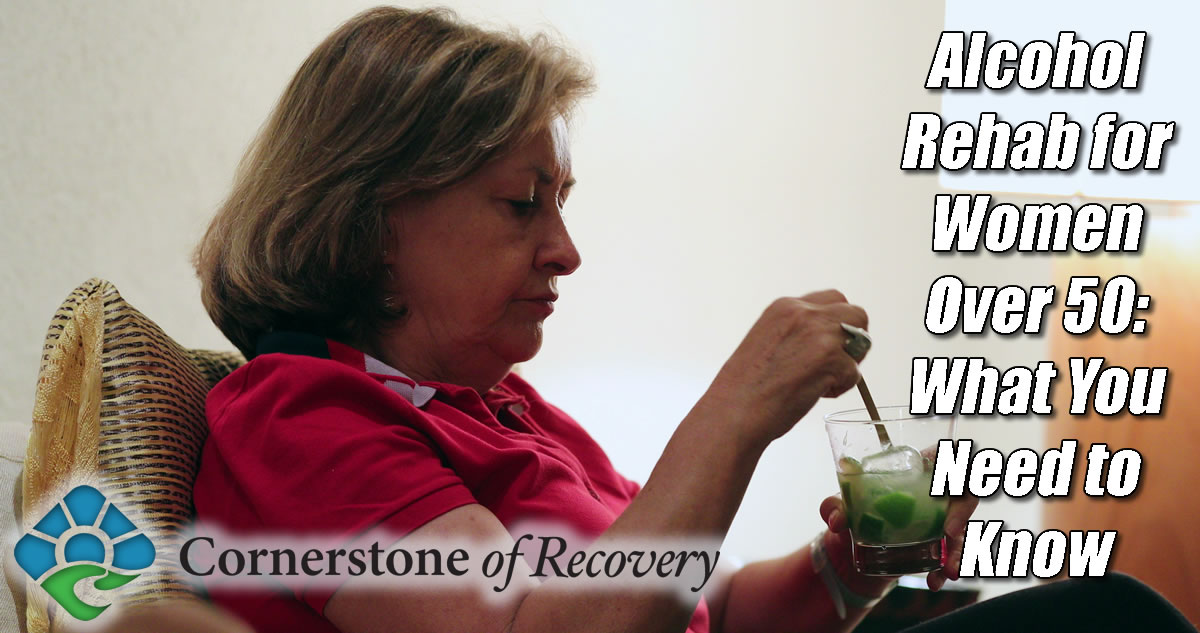 Let’s be real: If you’re an older woman with a drinking problem, getting treatment for it is often a decision made out of desperation … but when the time comes, finding effective alcohol rehab for women over 50 is essential.

Alcohol is a inextricably intertwined in our culture, and effective alcoholism treatment is often necessary to help those who find themselves with a problem do something about it. Alcohol rehab for women over 50 isn’t something a lot of ladies want to think about, but knowing that they’re not alone in their problem, and that help is available, can be reassuring.

Alcohol Rehab for Women Over 50: How Big Is the Problem? 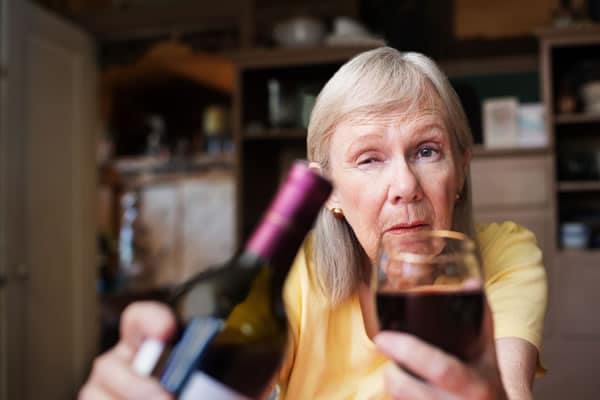 To put those numbers into perspective, let’s look at what all that booze means for Americans, according to the NIAAA:

Women age 50 and older may be more susceptible, the NIAAA also points out: “Older women may be especially at risk for alcohol problems because they are more likely than men to outlive their spouses and face other losses that may lead to loneliness and depression. Physiologically, women are also at greater risk for alcohol–related health problems as they age.”

And in recent years, that problem seems to be getting worse. According to the peer-reviewed journal Contemporary OB/GYN, a study presented at the North American Menopause Society 2019 Annual Meeting found that “binge-drinking and alcohol use disorder (AUD) are increasing more rapidly among middle-aged and elderly women,” and that while the prevalence of high-risk drinking increased by 30% from 2001-2002 to 2012-2013, “the greatest change in high-risk drinking … occurred in women (58%) and in age groups 45 to 64 and 65 and older. Alcohol-related emergency room visits in the United States were also significantly higher in 2014 compared to 2006: 5.0 million vs 3.1 million, respectively. This increase was largely due to chronic alcohol consumption in women aged 45 to 65.”

The ongoing COVID-19 pandemic, Harvard Health Publishing adds, has only exacerbated the problem: “The pandemic has further increased rates of alcohol use in women. According to a RAND Corporation study, during the pandemic women have increased their heavy drinking days by 41% compared to before the pandemic. Additional research has shown that the psychological stress related to COVID-19 was associated with greater drinking for women, but not men.”

It doesn’t help that in recent years, alcohol consumption by women has been venerated as fashionable. It’s called “Mommy Wine Culture,” according to ABC News — “a culture that encourages drinking alcohol to take the edge off of parenting and which has been reinforced by internet memes and products with mantras like ‘mommy fuel’ or ‘I wine because my kids whine.’” The COVID pandemic, however, seems to have accelerated it, USA Today reported in October 2020: “Alcohol consumption has increased by 14% compared with a year ago, including 17% for women, according to a report published in the JAMA Network Open. The study also showed a 41% increase in heavy drinking for women.”

Given these statistics, and the fact that such heavy drinking can take a physical, mental and emotional toll, alcohol rehab for women over 50 is a resource that needs to be discussed more openly these days.

What Does All That Drinking Do? 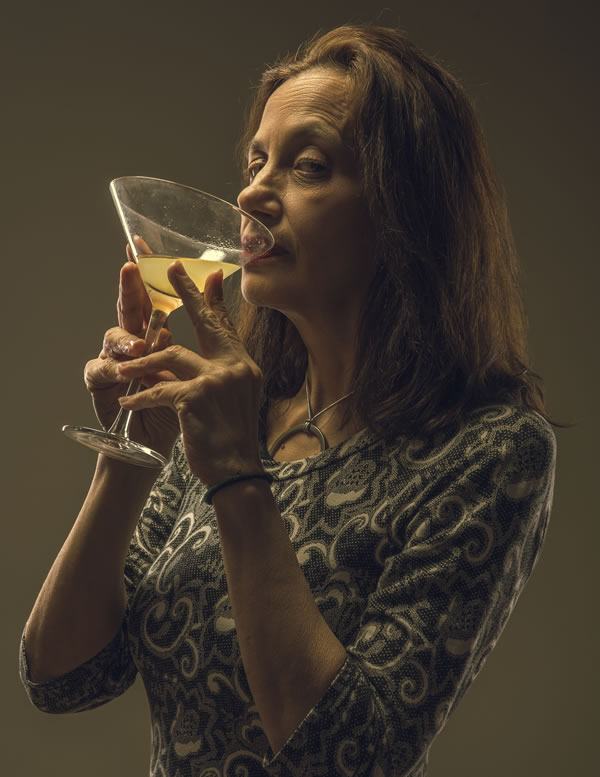 Whatever the reason behind the increase in alcohol consumption among women, the effects can be calamitous. Anne Bokma, writing for the Canadian magazine Broadview, sums it up succinctly: “Women are starting to catch up to men in drinking, and it’s killing us. Because of our physiology, we’re more sensitive to alcohol than men. We metabolize it differently, and thus experience higher blood-alcohol and impairment levels after having the same number of drinks. This puts us at greater risk of liver damage, heart disease, cancer, memory loss and brain damage. The chance of stroke doubles for women who exceed the drinking guidelines. Alcohol also disrupts our sleep and contributes to depression.”

What does she mean by women are “more sensitive to alcohol than men?” The NIAAA breaks it down: “Women of all ages have less lean muscle mass than men, making them more susceptible to the effects of alcohol. In addition, there is an age–related decrease in lean body mass versus total volume of fat, and the resultant decrease in total body mass increases the total distribution of alcohol and other mood–altering chemicals in the body. Both men and women experience losses in lean muscle mass as they age, but women have less lean muscle mass than men throughout adulthood and, therefore, are less able to metabolize alcohol throughout their lives, including into older adulthood. Liver enzymes that metabolize alcohol and certain other drugs become less efficient with age, and central nervous system sensitivity increases with age for both genders. In sum, compared with younger adults, and with older men, older women have an increased sensitivity to alcohol.”

A great many individuals — men included — cling to the idea that a few drinks can’t hurt, and by and large, that’s true. However, new research indicates that there are few, if any, health benefits in alcohol consumption by women, according to a report in Elle magazine: “Just one to two drinks a day has been linked to a 25 to 50 percent increased risk of breast cancer; in June 2020, the American Cancer Society released a new recommendation to simply avoid alcohol. Excessive drinking increases one’s risk for anxiety, depression, suicide, seven different types of cancer, stroke, and heart disease. Further, using alcohol to cope may make you dependent. ‘As soon as you start drinking to relieve the stress of your marriage or adjusting to motherhood, it becomes more addictive neurochemically,’ says author and alcohol-free influencer Annie Grace.”

The Centers for Disease Control (CDC) confirms those claims, highlighting a number of statistics related to alcohol consumption by older women:

On top of that, the mixture of alcohol and medication is of special concern in older individuals, according to the National Institute on Aging: “Many medicines — prescription, over-the-counter, or herbal remedies — can be dangerous or even deadly when mixed with alcohol. Many older people take medications every day, making this a special worry.”

Alcohol Rehab for Women Over 50: How Can It Help? 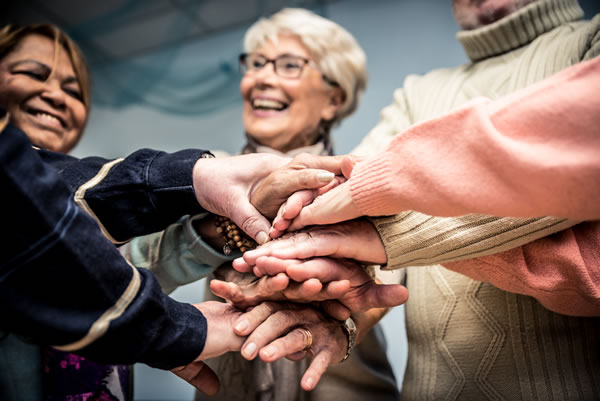 For starters, in understanding the effectiveness of alcohol rehab for women over 50, it’s important to note one thing, regardless of gender: Drug and alcohol treatment works. The National Institute on Drug Abuse (NIDA) confirms this: “According to research that tracks individuals in treatment over extended periods, most people who get into and remain in treatment stop using drugs, decrease their criminal activity, and improve their occupational, social, and psychological functioning … however, individual treatment outcomes depend on the extent and nature of the patient’s problems, the appropriateness of treatment and related services used to address those problems, and the quality of interaction between the patient and his or her treatment providers.”

In other words, to assess how effect alcohol rehab for women over 50 can be, the needs of that specific population have to be taken into account. Fortunately, that’s a subject that’s been studied for more than a quarter-century, going back to a 1994 paper in the journal Alcohol Health and Research World. In that report, the authors concluded that “Women’s needs in alcoholism treatment fall into three categories. The first category is unique to women, such as issues related to female physiology and reproductive functions. Certain aspects of psychological growth and development also may be gender specific. The second category covers treatment needs more relevant for women than for men. For example, female problem drinkers are more frequently the victims of sexual abuse or physical violence than are their male counterparts. The third category includes problems that are relevant to both women and men, such as psychiatric comorbidity and multiple substance abuse.”

In other words, there are a number of effective therapies utilized in alcoholism treatment that can be employed among both male and female populations, but certain gender-specific issues may mean some are more beneficial for female clientele. In addition, many women find that mixed-gender rehab programs often overlook or ignore their needs altogether. As such, women only alcohol treatment programs can be a beneficial too, although many women are reluctant, at first, to consider a gender-specific program, according to a 2018 study in the journal Addiction: “Women reported routinely that they had been concerned, anxious or scared about entering women-only treatment. They attributed these feelings to previous poor relationships with women, being more accustomed to male company and negative experiences of other women-only residential settings. Few women said that they had wanted women-only treatment, although many became more positive after entering the women-only service. Once in treatment, women often explained that they felt safe, supported, relaxed, understood and able to open up and develop relationships with other female residents.”

Such gender-specific treatment can have long-lasting effects as well. According to a 2011 article in Scientific American, in which Harvard Medical School psychiatry professor Shelly Greenfield tracked the statistics of her own work with female alcoholics. Her findings? “Follow-ups at six months showed that women from the all-female recovery groups relapsed less often than women in the mixed group. In her all-female treatment groups, Greenfield discovered that women shared personal information more readily, and bonding behavior was more noticeable, particularly for less assertive women.”

Still, the hesitation to seek treatment is understandable. Alcohol rehab for women over 50 isn’t any woman’s first choice, especially if an addiction to alcohol is a later-in-life development. But given that the goal of treatment is to address life traps, coping skills and emotional traumas beyond the initial desire to get sober, it can often be a choice that changes lives.